Israel's Bennett gets scolded by the White House

Refusing an Israeli request for a phone call between Prime Minister Naftali Bennett and US President Joe Biden, the White House clarified the rules of the game and what kind of relationship they expect between the two leaders. 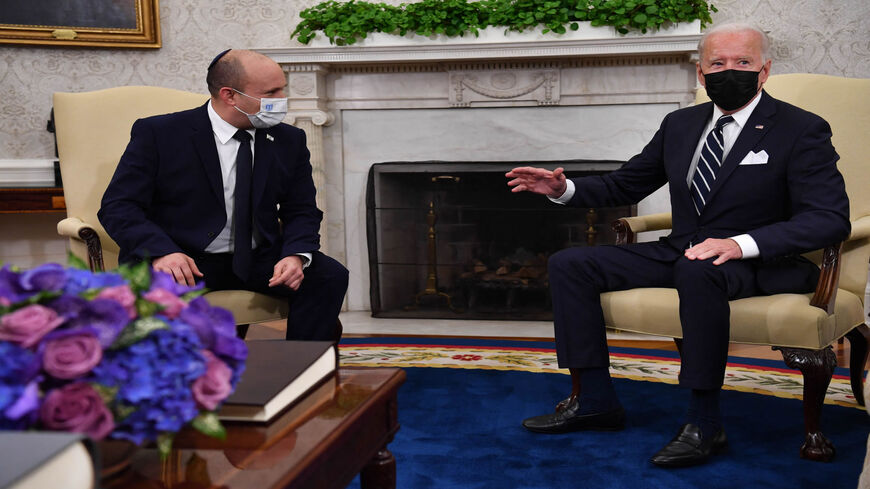 The lesson that US President Joe Biden wanted to teach Israeli Prime Minister Naftali Bennett has been learned and the two leaders will probably talk soon. That, at least, is the hope in Jerusalem. “The Americans punched Bennett in the nose,” a very senior diplomatic security source told Al-Monitor on condition of anonymity. “This was a clear American signal about the rules of the game and the relationship they expect to see between the White House and the prime minister’s office. I think Bennett got the message.”

A clear indication that Bennett did, indeed, get the message can be found in his public silence in recent weeks on the issue of the nuclear negotiations with Iran. The harsh criticism that Bennett had publicly directed at the policy of the West, and specifically of the United States, has recently dropped below the radar and is conveyed, if at all, only behind closed doors. A senior political source speaking on condition of anonymity quoted last week Bennett on this specific issue, saying, “The point has been made. There’s no need to harp on it.”

The glitch between Jerusalem and Washington was triggered by a Channel 13 News report according to which the White House was ignoring Bennett’s request for a phone call with Biden, which the Israelis had put in weeks ago. The response by the prime minister’s office to the report was essentially true, saying there had not been an official request for such a phone call. On the other hand, there had been an informal one. Al-Monitor has learned that it was conveyed by Bennett’s influential policy aide Shimrit Meir (who was a guest on Al-Monitor “On Israel” podcast last April) to the new American Ambassador Tom Nides in Tel Aviv.

In hindsight, Israel concedes that the whole process had been mishandled, allowing the president to deviate from diplomatic protocol and ignore the request. “The request did not go through the usual channels,” a top Israeli diplomatic source told Al-Monitor on condition of anonymity. “The Israeli Embassy in Washington was completely unaware of it. Had it been aware, it would have tried to help.” Al-Monitor has also learned that the embassy in Washington had recently recommended that Jerusalem avoid asking for a phone call between the prime minister and the president because the time was not convenient.

What prompted the American displeasure was a story leaked by the prime minister’s office about a recent conversation between Bennett and US Secretary of State Antony Blinken. From what Al-Monitor learned, the leak was inaccurate, to say the least. It failed to mention that Blinken was the one who called Bennett, and it described the call as “difficult” and focused on Iran.

The State Department regarded the leak as an attempt by Bennett to score points with Israeli voters by presenting himself as being tough with the Americans, at Blinken’s expense. In fact, it seems that Bennett was trying to create a nonexistent clash between himself and Blinken, whom the Israelis actually consider the most conciliatory link in Washington. The Americans countered with a leak according to which Blinken was the one who initiated the phone call, which actually focused on a US reprimand over an Israeli plan to push through approval of construction in the East Jerusalem area of Atarot. But the real payback came when Washington ignored the informal request for Biden to call Bennett, a call which has not occurred so far, as far as we know.

On the other hand, last week’s visit in Israel by US national security adviser Jake Sullivan has been described as excellent. “The gaps between us and the Americans have been defined,” another senior Israeli diplomatic source told Al-Monitor on condition of anonymity, “and they are a lot less major than it appears.” According to the source, the current US assessment of negotiations with Iran and of Iran’s conduct is almost identical in both capitals, Jerusalem and Washington. “If anything, the Americans are even taking a slightly tougher approach than we are,” the source said. Where they might differ is on the question of the response if and when the talks collapse. Sullivan promised his Israeli hosts that the United States would not continue with the negotiations ad infinitum and said a deadline would be reached in a matter of weeks.

And what then? Israel is hoping the United States will revert to its “maximal pressure” policy on Iran applied by the Trump administration, impose additional sanctions on Iran, intensify its isolation and put a viable, concrete military option squarely on the table. The Americans have yet to decide. The senior Israeli diplomatic source described the US position as “a strategic embarrassment,” arguing that Iran is not among Biden’s priorities right now. “Washington is currently focused only on the three 'C’s' — corona, China and climate,” said the source. “Iran is not there, and we are trying to move it up on the list as much as possible,” the source added.

Officials in Jerusalem are hoping Sullivan’s visit has allayed tensions between the White House and the prime minister’s office and that the differences have been ironed out. Bennett is finding it hard to deal with perpetual US pressure regarding developments in the West Bank.

“That is the only thing they care about,” one of Bennett’s associates admitted on condition of anonymity. “They call up all the time about Atarot, about Sheikh Jarrah, about settler violence against Palestinians, about construction in the settlements,” the associate told Al-Monitor, referring to the saga of the forced evictions of Palestinians from their homes in the East Jerusalem neighborhood of Sheikh Jarrah.

That being said, in the internal disagreement within the two ideologically disparate wings of Bennett’s government, Defense Minister Benny Gantz and Foreign Minister Yair Lapid have apparently the upper hand. Rejecting the approach of publicly criticizing the administration, they preach against outing the differences with the United States. Bennett, it seems, has been forced to fold and join them.

Thus, Gantz has become the “go to” guy for the Americans. They believe him. They view him as a reliable asset with whom they can clarify and iron out issues. They appreciate his policy, which allows for arguing and fighting between Jerusalem and Washington behind closed doors, while presenting a unified public stand. They too have heard the quote attributed to Gantz: “We have no other America.”