In win for Israel, US seems to backtrack on removing IRGC from terror list

Convincing Washington not to remove the Iran Revolutionary Guard Corps from its terror list is not akin to halting the negotiated new nuke deal, but it is certainly a major diplomatic achievement for Jerusalem. 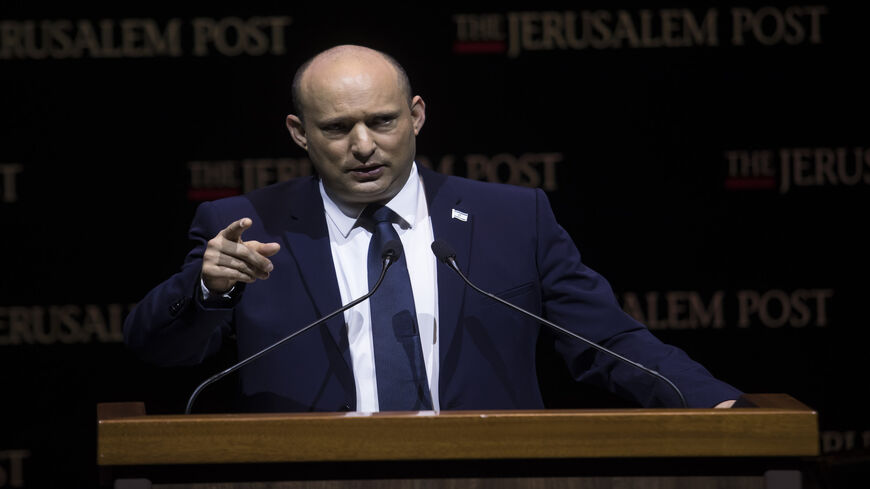 Prime Minister Naftali Bennett put the odds of a new deal being signed on Iran’s nuclear program at 95% — until a few days ago. Some of his associates even put them at 100%. “The agreement is ready,” one of his associates had told Al-Monitor on condition of anonymity a few weeks ago. “It is on the table, alongside a pen. Only the signature is missing.”

However, this assessment has changed in recent days. According to his associates, Bennett now believes the prospects of a signature on the agreement are now 50-50. The US administration is still keen to sign, he told his associates, adding that Israel understands the American rationale but disagree with it. He then said that the whole business has reached a dead end over the issue of Iran's Islamic Revolutionary Guard Corps (IRGC).

On April 20, reports said that contrary to previous reports, US President Joe Biden now seems determined to keep the IRGC on the American list of terror groups.

Bennett and his people view this standoff over Iran’s demand to remove the IRGC from the US list of terrorist organizations as a major achievement, albeit a tactical rather than a strategic one.

“The Iranians are closely monitoring global energy prices,” Bennett’s associate told Al-Monitor. “They know how much money they are losing every day by insisting on removal of the IRGC from the list of terrorist groups. Add to this the basic American aspiration to sign the deal, and you see that it is not over — far from being over. Meanwhile, we can be pleased.”

In a clear reference to the aggressive Israeli offensive against the Iran deal mounted previously by former Prime Minister Benjamin Netanyahu, the source added, “We did this openly, without going behind the administration’s back, without a media campaign, in a respectful manner, and the Americans appreciate this.”

Bennett was quick to identify the IRGC demand as the soft underbelly of the negotiations between the sides. He called Foreign Minister Yair Lapid, got him on board and the two went to work. Their campaign consisted of deploying levers in US Congress, identifying those opposed to giving the IRGC a pass, and lengthy talks with senior administration officials. Bennett spoke with US national security adviser Jake Sullivan, Secretary of State Antony Blinken and several other particularly close aides of Biden. Lapid mobilized Israel’s newly installed and highly respected ambassador to the United States, Mike Herzog, who “gave it his all,” according to Jerusalem sources, and discussed the issue at length with relevant figures.

Bennett’s policy adviser Shimrit Meir was also thrown into the fray, flying to Washington earlier this month. After two successive days of talks at the White House, an official was dispatched to her hotel to inform her that the Israeli position had been accepted and a decision was made to reject the IRGC demand, for now. Unfortunately, back in Jerusalem, Knesset coalition whip Idit Silman picked the same day (April 6) to announce she was quitting Bennett’s coalition, dealing the government a debilitating and possibly lethal blow.

Despite the political setback, Bennett continued to exert massive pressure on Biden’s advisers. Blinken and Special Representative on Iran Robert Malley, for their part, pushed back. The disagreement, as reported following the April 24 phone call between Biden and Bennett, was apparently resolved in Israel’s favor. Officials in Jerusalem described the call as the best ever conversation between the prime minister and the president. “Finally, a breakthrough that shows relations of trust are a done deal,” one Israeli diplomatic source told Al-Monitor, speaking on condition of anonymity. A White House readout of the conversation reflected this assessment.

“What the White House likes about Bennett,” one of the prime minister’s people told Al-Monitor on condition of anonymity, “is his frankness. He does not try to pull one over on the president — he tells him the whole truth, he is straightforward with him.”

Indeed, Israel was open about its intention to fight the campaign against the removal of the IRGC from the US terrorism watchlist. “It was all done publicly. They know we oppose the nuclear agreement, which we view as an immediate danger to our national security, and would be happy if it were not signed,” the source (one of Bennett’s people) said. Bennett himself has told aides that the president “knows I would not deceive him. When we agree on something, he knows it, and when we do not, he also knows. We would not embarrass him, attack him, but we will tell him the truth and share with him honestly what we view as the best way forward. He appreciates this,” the official continued.

The source summed it up this way: “We have not won this war, but you could say we have won the battle. Malley and Blinken still hope to sign the agreement. The frankness goes both ways. They, too, tell us exactly what they think, and we respect that.” Asked how the Americans see the agreement playing out if they insist on signing it at almost any cost, he said the Americans think that under the terms of the deal, if the uranium Iran has already enriched to a 60% level is removed, and its continued enrichment is blocked, the deal would free up the president to focus on China and Russia and leave it to the next president to deal with a follow-up once the agreement expires. “We, by the way, disagree,” he added.

Al-Monitor has learned that during a visit to Washington this week by Israel’s national security adviser Eyal Hulata, various Israeli scenarios were presented to the Americans as alternatives to the nuclear agreement. “This is what concerns the Americans more than anything else,” another senior associate of Bennett told Al-Monitor on condition of anonymity. “What happens if no agreement is reached. So, we put in some work and passed on our scenarios and suggestions. It was an important visit.”

Officials in Jerusalem are also highly pleased with the outcome of what they argue is the first time ever that the Americans have turned down an Iranian demand. According to Bennett’s aides, the past week proved that such moves were feasible. “The world continued to rotate on its axis, the sun kept shining, even after the US drew a red line vis-a-vis the Iranians. This is an important demonstration and significant achievement,” said the senior associate. “But it is not over. The struggle is ongoing and intense. Israel makes its positions known and sticks to its guns, without damaging the president and without unraveling the intimate relationship we enjoy with the world’s strongest power.”