Jerusalem noted that US Secretary of State Antony Blinken referred to "every possible option" on Iran, but is still sceptic over the Americans adopting a tough approach. 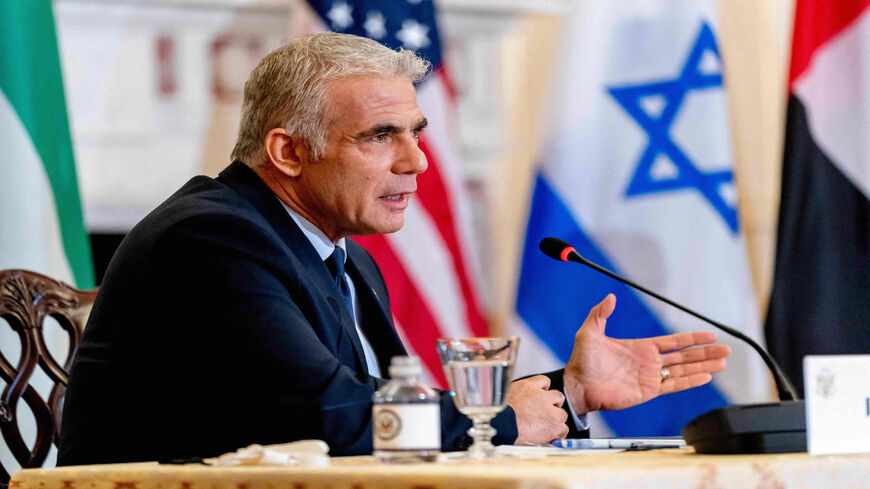 This week’s Washington visit by Israeli Foreign Minister Yair Lapid, on Oct. 12-14, slightly eased the pessimism and deep concern that emerged from Jerusalem after the latest round of Israel-US talks on the Iran nuclear program, as described here in a previous article. It remains to be seen whether progress has been achieved between the sides on the troubling question of “what do we do about Iran,” or whether this shift simply reflects different nuances in the American tone and Lapid’s optimistic nature. As is generally the case in Israeli politics, the left is more hopeful than the right. Prime Minister Naftali Bennett, for example, tends to pessimism.

An electronic microscope is required to detect tangible progress. Lapid and his people hailed the fact that Secretary of State Antony Blinken upgraded the stated US public position regarding Plan B, which is the alternative in case Iran refuses to return to the nuclear agreement. While President Joe Biden said following his Aug. 27 meeting with Bennett that if all diplomatic options are exhausted, the United States would examine “other options,” Blinken spoke of “every option.” With Emirati Foreign Minister Abdullah bin Zayed Al Nahyan to his left, and Lapid to his right, Blinken said at an Oct. 13 Washington news conference, “We will look at every option to deal with the challenge posed by Iran.”

It would be wrong to assume that anyone in Tehran was bowled over by this utterance. The Iranians are moving toward nuclear capabilities much faster than Israel is managing to push the Americans toward the truly coveted declaration that if diplomacy fails, a “credible military threat” would be examined. Surprisingly, a senior Israeli source who took part in high-level Washington talks Oct. 5 denied Israel was trying to formulate an alternative plan with the Americans. “We do not want to be part of this plan in order to avoid limiting our freedom of action. The US is the one that should be preparing a convincing alternative; it is the superpower in this case, not us,” the source said on condition of anonymity.

Generally speaking, Lapid is very pleased with his Washington talks. He is not the source of the criticism heard in Israel behind closed doors. The Americans did everything possible to ensure the success of his visit, including coordination of the trilateral Nahyan, Lapid, Blinken meeting, a dinner hosted by the Emirati foreign minister, a joint event with congressional Democrats and Republicans, an entire day with Blinken himself and a half day with Vice President Kamala Harris. Lapid, a convivial politician skilled at small talk enjoyed himself tremendously. The question is whether any substance was responsible for the enjoyment, or just the climate.

According to the Israeli source who took part in last week’s talks, Israel recently shifted its policy. So far, they said, Israel had not pressed the United States to present a credible and real military option because it feared this would push Iran back to the negotiating table. There was nothing former Prime Minister Benjamin Netanyahu wanted less, nor were the Americans interested in such a move because they had yet to decide on their Plan B and did not want to limit their options.

“Things have changed now,” a senior Israeli security source said on condition of anonymity. “At this point in time, it is essential to present a credible military threat.” Lapid’s entourage is jealously protective of the US administration’s honor and is careful to distance itself from any suggestion of public criticism as it is to distance itself from a new coronavirus variant. Still, there are voices suggesting it is high time for the superpower to bang on the table and demonstrate that it is truly a superpower. Absent a return to the nuclear agreement, there is no other option.

Such thoughts are being expressed even as the most optimistic US officials are starting to talk about the nuclear agreement in the past tense. The most prominent of them is Special Envoy on Iran Robert Malley, who was interviewed at the Carnegie Institute by former administration official Aaron David Miller just hours before he met with Lapid. The United States and its allies must brace for a world in which the Iranian regime “doesn’t have constraints on its nuclear program,” Malley conceded, but did not admit that this contradicts his previous optimistic assessments.

So what now? The Americans are surprised, just as the Israelis are, at the homogenous negativity of the new government in Tehran. A senior Israeli official told Al-Monitor on condition of anonymity that while the election of Ebrahim Raisi as president had not come as a surprise, “what is surprising is the fact that there is not a single different voice in the new government, everyone is purely radical.” According to diplomatic sources, at his meetings with National Security Council officials, Lapid said something to the effect that the current Iranian government looks like Interpol’s Most Wanted listed. The Americans did not disagree.

Israel is focused on putting pressure on the United States and mobilizing as many other allies as possible for that task. According to Israeli assessments, the United Kingdom is the only power among the six signatories of the 2015 deal with Iran that shares the Israeli view regarding the need to present a credible military option. “The British arrived at this conclusion a long time ago,” said the top Israeli diplomatic source. But right now, they are the only ones. “The Russians don’t even think Iran is striving for military nuclear capacity, the Chinese are only interested in doing business and the French are busy taking offense,” the source said. Asked where Germany stands, the source said it shares the US position.

Israel is trying to signal a sense of urgency, without much success. Lapid stirred the flames with a rare utterance. “There are moments when nations must use force to protect the world from evil,” he said at the Washington news conference. “Israel reserves the right to act at any given moment, in any way,” Lapid stated. “That is not only our right, it is also our responsibility. Iran has publicly stated it wants to wipe us out; we have no intention of letting that happen.”

Lapid’s hints might generate concern in Washington, but not in Tehran. The Iranians are well aware of the fact that the proposed Israeli budget allocates 7 billion Israeli shekels ($2.17 billion) for upgrading Israel’s military option vis-a-vis Iran’s nuclear program, but such an event appears distant, for now. The United States is the one holding the keys to the next act in this saga. Israel is doing all it can to make the Americans realize the extent of the risk. Right now, as already mentioned here, the speed at which the Americans are becoming convinced of this is a lot slower than the speed at which the Iranians are moving toward a bomb.