Prime Minister Yair Lapid was surprised by the briefings to the press of Mossad Director David Barnea, who accused the West and the United States of generating a strategic catastrophe for the region. 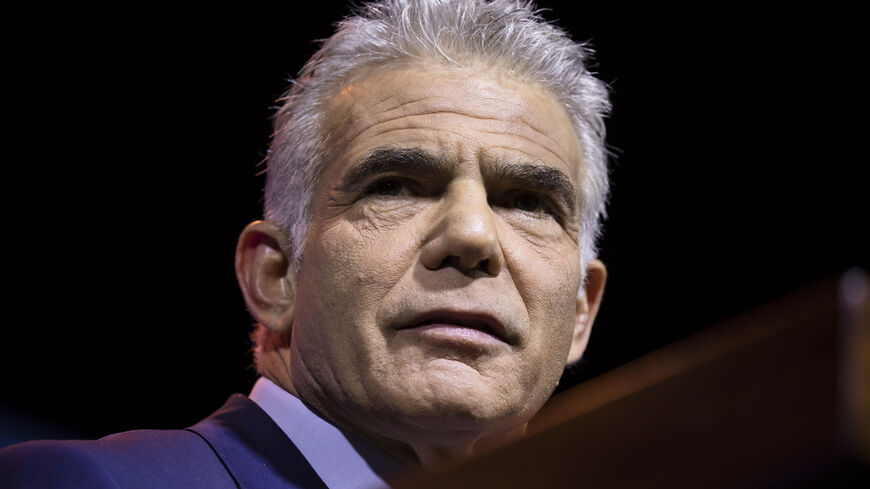 The intense efforts by world powers to reach agreement with Iran on its nuclear program are sending shockwaves through Israeli politics and diplomacy.

Just this past week, the Iran deal drama set off an impressive number of clashes, both publicly and behind the scenes. In Israel, caretaker Prime Minister Yair Lapid went head-to-head with Mossad Director David Barnea. The spy agency chief, for his part, collided head on with the US administration, which he slammed in briefings to reporters. As always, former Prime Minister and current opposition leader Benjamin Netanyahu took advantage of the fallout for his own political needs ahead of the Nov. 1 elections, attacking Lapid directly, and the United States as a “side benefit.”

These squabbles are overshadowed by the official, polite disagreement with the Biden administration over its continued bid to reach a deal with Tehran, which both Lapid and Defense Minister Benny Gantz believe could generate destructive regional chain reactions.

The escalation began Aug. 25, when Barnea conducted a series of media briefings, which generated harsh headlines, especially at the expense of the Biden administration. Barnea argued that the emerging deal with Iran was an unprecedented fraud. He accused the United States of willingness to ink the agreement and start implementing it even before the verdict is in on the findings of international inspectors at Iran’s suspected nuclear sites, dubbed the agreement a “strategic disaster,” and blamed the United States for giving in to most of Iran’s demands in order to wind up negotiations at all cost.

Barnea’s views were reflected last week in an Al-Monitor exclusive, but a few days later he went public after briefing Lapid and giving him advance notice of his planned media remarks. Lapid was thus informed of Barnea’s intentions, but he did not foresee the harsh tone, the impact of the spymaster’s remarks and especially the frontal criticism of Israel’s closest ally at such critical timing.

Lapid, reportedly surprised by the headlines, summoned Barnea for a clarification talk. The prime minister’s office conveyed messages to Washington, saying Barnea’s tone and some of his comments did not reflect Lapid’s stand.

Lapid was mostly surprised by Barnea’s omission to inform reporters that the United States had toughened its stand on the pending International Atomic Energy Agency (IAEA) investigations, which Iran is demanding be shut down, and had adopted a position closer to Israel’s in the wake of last week’s visit to Washington by Israeli national security adviser Eyal Hulata.

Lapid has been trying to schedule a phone call with US President Joe Biden to discuss the latest developments with Iran, but knows Barnea’s media blitz greatly diminishes prospects of such a call.

Lapid’s aides have made clear to their American counterparts that Israel had not engaged in a “sting” operation of the type favored by Netanyahu in his complex dealings with Democratic administrations, and that a planned Barnea visit to the US capital next week, including an appearance before the Senate Intelligence Committee, was not intended as a discourtesy to Biden but simply to update officials there and exchange intelligence information.

The gist of what Lapid’s aides have been telling their counterparts is that unlike Netanyahu, who went behind President Barack Obama’s back to lobby Congress against the impending 2015 deal with Iran, neither Lapid nor his government would adopt such an underhanded approach. “Such things will not happen on our watch,” one senior Israeli diplomatic official told Al-Monitor on condition of anonymity.

Netanyahu has gleefully joined this latest fray, taking advantage of the opportunity to challenge the Lapid government’s Iran policy. As opposition leader, the veteran leader and diplomat has repeatedly shunned the periodic security updates by the prime minister, mandated by law, reluctant to be shown accepting a briefing from his allegedly inexperienced, neophyte successors — first Naftali Bennett and now Lapid.

Netanyahu did show up in the prime minister’s office for an update during Israel’s operation against Islamic Jihad in the Gaza Strip earlier this month, as he did this week in response to a formal invitation by Lapid. Following the meeting, Netanyahu announced that he was more concerned over what he had heard than he was going in.

Shortly before, Netanyahu had posted a video clip replete with inaccuracies, to say the least, regarding the government’s Iran policy, elegantly glossing over the fact that even he had not succeeded in talking Obama out of the deal with Iran in 2015. Netanyahu also failed to mention that his persistent broadsides at Obama had reportedly hardened the administration’s resolve to reach agreement with Iran and inflicted serious damage to Israel’s ties with the Democratic Party, which his successors are still trying to repair.

The different approaches highlight the deep division between these two rivals competing in the upcoming elections: Netanyahu who was determined to abort the deal with Iran even at the expense of sabotaging Israel’s relationship with its most important strategic ally, and Lapid, fully aware that this time, too, the administration would go against Israel’s wishes on Iran but is determined to protect the intimate alliance with a view to the future.

And what do senior members of the Israeli defense establishment think?

Barnea is indeed leading the hawkish, aggressive and perhaps even fatalistic line on the emerging agreement with Iran. Barnea claims that most defense officials are aligned with him. He argues that they all know the dangers and shortcomings of the agreement and that almost everyone in the security system believes that it is better not to sign it.

Judging by reports and by talks with Israeli security officials, Barnea is right, but also wrong. Indeed, there has been a shift in the professional positions of some security chiefs, especially of Chief of Staff Lt. Gen. Aviv Kochavi. However, quite a few others believe Israel has no better alternative than the deal now on the table, which would give it valuable time to prepare for a military attack.

This position is still held by the head of military intelligence, Maj. Gen. Aharon Haliva, as well as his predecessor, Maj. Gen. Tamir Hayman, who expressed his views on an Al-Monitor podcast episode in late July and published a comprehensive article on the subject this week. The head of the Political-Security Division in the Ministry of Defense, Brig. Gen. (Res.)  Dror Shalom still believes a new agreement is the lesser evil compared to those currently on the table.

Against this backdrop, Gantz's Aug. 26 visit to Washington appears to suggest an intensified, American-Israeli effort to create the impression of a "credible military option" against Iran's nuclear infrastructure, an option Israel believes will make Iran's positions more flexible and help reach an enhanced, longer-term agreement.