Israel warns Iran could attempt to enrich uranium at 90% 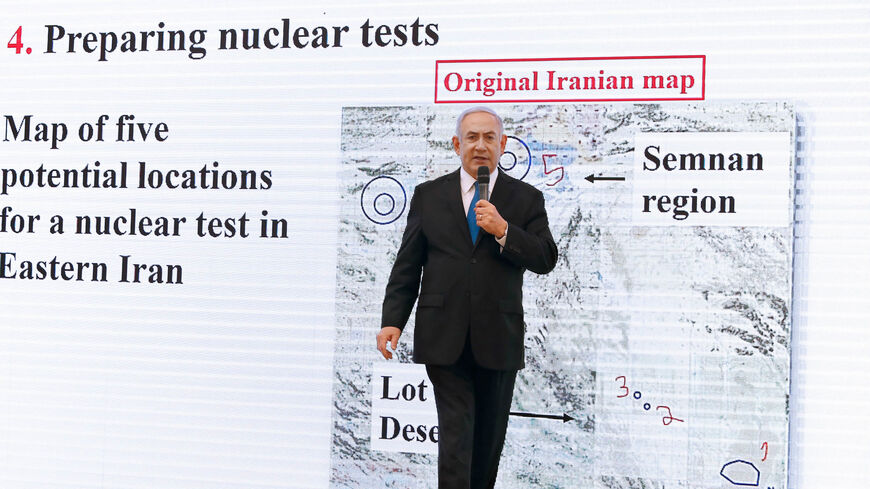 Tel Aviv - Israel was apparently not surprised on the morning of Nov. 22 by the Iranian news agency ISNA report that the country has begun to enrich uranium to 60% purity at its underground Fordo site. Analysts explain that this move brings Iran technically closer to weapons-grade levels of 90% enrichment. The Israeli security system has been warning for several months that Iran is continuing its nuclear program, mainly regarding the enrichment of uranium.

With that in mind, former Likud Minister Tzachi Hanegbi said Nov. 4, “[Prime Minister-designate Benjamin] Netanyahu will move to destroy Iran’s nuclear [infrastructure] during his coming term.” In a first interview after the Likud’s election win, this close associate of Netanyahu noted, “If he [Netanyahu] won’t act, Israel will face an existential threat. … Negotiations between Iran and world powers have actually stopped. Unless they result in agreement, or the United States takes independent action, Israel will have to do so. Just like [late Likud Prime Minister Menachem] Begin did in 1981 and [former Prime Minister Ehud] Olmert in 2007.”

Military Intelligence Chief Maj. Gen. Aharon Haliva said so as much at a Nov. 21 conference of the Institute of National Security Studies. “The greatest test of the international community is coming when Iran entertains [the idea of] enrichment at 90%, even if only symbolically,” said Haliva, an outspoken officer who does not try to embellish the truth.

He continued, “Iran currently holds enriched material sufficient for four nuclear bombs. That means they need 100 kilograms [220 pounds] of 90% enriched uranium for four nuclear warheads. They take one step at a time, and wait to see the reaction of the international community. When they see that the world largely accepts the new step, they keep going.”

Haliva expressed pessimism over the willingness of US-led Western powers to intervene in Iran or deter its actions in this respect. “As the pressure on Iran increases, including internal pressure, the Iranian response is much more aggressive, so we should expect much more aggressive responses in the region and in the world.”

Haliva noted that since Jan. 1, almost 100 hostile Iranian actions have been recorded, including cyberattacks. The intelligence chief also reported that Iran had considered a terrorism attack during the World Cup in Qatar, and intends to attack Saudi Arabia in the coming weeks because it attributes the recent rioting in Iran to Saudi intervention.

“In London, they are preparing for an Iranian attack and they know what they are talking about. The United States is preparing for Iranian terror. I am not convinced that the [rest of the] world understands the power that the Iranians bring to the global level.”

Haliva concluded, “The conditions under discussion for a nuclear agreement are no longer relevant. I think we can talk with Iran either about forceful action against it or about an agreement under totally different terms.”

Haliva’s remarks likely explain the urgent visit to Washington by his commander, Chief of Staff Lt. Gen. Aviv Kochavi for meetings with national security adviser Jake Sullivan, CIA Director William Burns and Joint Chiefs of Staff Chair Gen. Mark Milley. The backdrop for the visit — Kochavi’s final one before leaving office next month — was new intelligence information regarding Iran’s enrichment intentions and Israel’s concern that with the mid-terms behind it, the Biden administration will resume nuclear negotiations with Iran.

The administration will have to contend with a new Israeli approach. Gone is the focused, business-like approach coordinated with Washington by Prime Ministers Naftali Bennett and Yair Lapid since they ousted Netanyahu in June 2021. Netanyahu’s return, buoyed by his Nov. 1 election victory, signals the return of Israel’s Iran phobia and the sense of isolation and impending catastrophe that Netanyahu is so skilled at instilling in Israelis and the international community on this issue. The question is whether Netanyahu is truly willing or able to order a military strike on Iran’s nuclear infrastructure, cognizant as he is of the operational and diplomatic repercussions of such a move.

There is at least some solace to be found in the reported reluctant agreement by head of the ultranationalist Religious Zionism party Bezalel Smotrich, to forego his demand to be appointed defense minister in Netanyahu’s emerging government. Smotrich will likely be named finance minister and Likud Knesset member Yoav Galant will probably step into the defense minister’s shoes. Galant is an experienced former general, unlikely to drag Israel into military adventures. Kochavi’s successor, Maj. Gen. Herzl Halevi who takes office in January, is known as an independent thinker and a principled officer who will not be easily embroiled in risky endeavors.

The upcoming Israeli regime change could shift the power balance among its security leadership in favor of those who advocate a military solution to the Iran problem and take a dire view of Iran’s intentions.

The most prominent among this hawkish group has been Mossad Director David Barnea, who issued several rare pronouncements against a nuclear deal with Iran and led the most aggressive approach in the outgoing government, but was partly reined in by Bennett and Lapid. Netanyahu’s return is likely to bolster Barnea’s approach and weaken those who believe that a flawed and limited deal with Iran is better than no deal at all (as Haliva is known to believe).

The decision will ultimately rest with Netanyahu, the prophet of doom on Iran. It is hard to believe that he will order the Israel Defense Forces to attack Iran in 2023 having reluctantly abandoned the military option a decade ago, when circumstances were far more conducive for such a move. But if Netanyahu becomes imbued with the messianic spirit of his Religious Zionist partners, and the sense of an impending apocalypse against which he has repeatedly warned, anything is possible and the White House is welcome to start worrying.