Israel's political landscape will shift dramatically over the next few weeks, as the US president is set to visit. 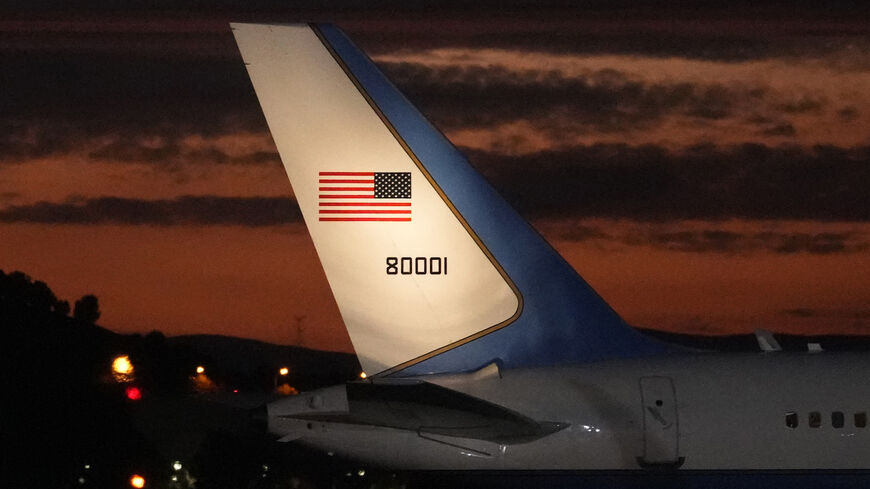 Air Force One taxis on arrival at the Torrejon de Ardoz air base in Madrid, Spain, on June 26, 2022, ahead of the upcoming 2022 NATO Summit. - PAUL WHITE/AFP via Getty Images

Yair Lapid is scheduled to take over from Naftali Bennett as Israeli prime minister next week under a complex job-sharing agreement. It's an open question whether Lapid intends to maintain Bennett’s hawkish, confrontational policy on Iran and on the nuclear agreement between it and world powers.

US President Joe Biden’s July 13 visit to Israel comes as yet another domestic election cycle heats up and will require great precision, discretion and sensitivity. His schedule includes meetings with a newly minted prime minister, a new alternate prime minister, a president and possibly a former prime minister running for a return to the premiership. It's a political minefield for Biden and his staff.

Former Prime Minister Benjamin Netanyahu suspects the Democratic president who served as vice president for former US President Barack Obama of aspiring to sabotage his electoral prospects. Netanyahu is deeply disliked by Democrats. His opponents can be expected to leverage this hostility and their own warm friendship with Biden.

One of the more intriguing questions ahead of the visit is which Lapid will await Biden at the bottom of the Air Force One stairs, his hands full of the highly volatile Iran issue and the Palestinian problem.

The Palestinian issue has been largely dormant since the White House reluctantly accepted the deep limitations of the government leading Israel since June 2021. But this government will have changed by the time Biden arrives and there will be no more anxiety about its survival. Biden may therefore expect Lapid to offer more significant concessions to the Palestinian Authority and possibly even concrete diplomatic moves.

Lapid would likely to address such requests in his typically polite style, asking the president to defer all new initiatives and ideas until after the Israeli elections, probably in early November.

Lapid heads the center-left bloc on Israel’s political map and a position favoring talks with the Palestinians would be unlikely to do him significant damage. But if he wants to win, Lapid mobilize at least two or three Knesset seats from the moderate right. The same would go for any contender, whether Lapid, Defense Minister Benny Gantz or Justice Minister Gideon Saar, trying to prevent Netanyahu from achieving a 61-seat Knesset majority and deeply changing Israel as we know it.

The upcoming rotation between Bennett and Lapid, likely to take effect June 29, comes at a crucial juncture as world powers resume their efforts to reach a new agreement with Iran on its nuclear program. Israel’s defense agencies are divided on the matter.

The Intelligence Directorate of the Israel Defense Forces (both its current head Aharon Haliwa and his predecessor Tamir Heyman) sees an agreement as the best among bad options under the current circumstances. The Mossad under director David Barnea holds the opposite view. Gantz has avoided publicly taking a stand, but is known to be closer to the Mossad and IDF Chief of Staff Lt. Gen. Aviv Kochavi on the matter.

Bennett was staunchly opposed to any agreement and made strategic changes to Israel’s Iran policies over the past year. Is Lapid on the same page, or will he change course? Lapid and Bennett have agreed to leave the Iran portfolio in Bennett’s hands after their rotation, but regardless of agreements and portfolios, the man at Israel’s helm by the end of this month will be Lapid.

Lapid’s leadership is unlikely to augur change in Israeli policy on the Iran agreement. Last week, Lapid made his views clear in response to a message from the EU’s foreign policy representative Josep Borrell informing him he was heading for Tehran to try to restart the deadlocked negotiations. Lapid reportedly responded angrily, telling Borrell that resuming negotiations was a “strategic mistake” as Iran was only interested in playing for time.

An unusual joint message issued by Lapid and Bennett on March 18 urging the Biden administration not to remove Iran’s Islamic Revolutionary Guard Corps from the US list of terrorist organizations is another indication of Lapid’s mindset. Gantz declined to sign on to statement.

While Lapid's views are closer to Bennett’s than to those of Gantz and military intelligence, he is more of a pleaser than a challenger, especially on Israel's US ties. “The real question,” a senior Israeli diplomatic source told Al-Monitor on condition of anonymity, “is whether Biden can reassure Lapid on the Iran agreement and offer sufficient US guarantees convincing Lapid to take his foot off the gas pedal.”

Associates of Gantz, who might compete with Lapid for the support of the center-left, hope Lapid shifts toward their candidate’s views on Iran. “If the Americans opt for an agreement, they will get an agreement with us or without us,” a senior source in Gantz’s camp told Al-Monitor on condition of anonymity. Rather than an all-or-nothing approach, the source added, “Israel should strive for deep strategic understandings with the Americans combined with a hefty compensation package.”

Lapid’s personality, his centrist views and his deep understanding of the importance of the strategic relationship with the United States as the underpinning of Israel’s national security all suggest that the Americans will find it easier to do business with Lapid on an Iran deal than with Bennett still in office.