Notching up diplomatic efforts over nuclear talks with Iran, Foreign Minister Yair Lapid will travel next week to Washington, while Prime Minister Naftali Bennett might travel the week after to Moscow. 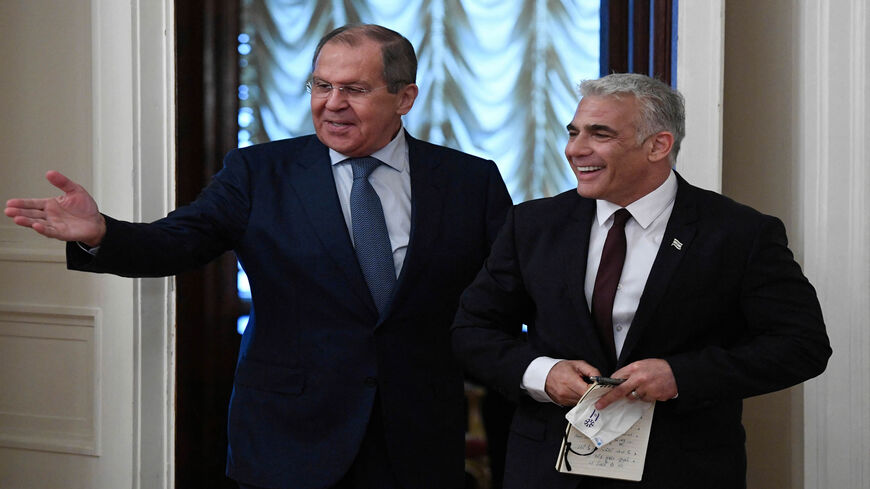 Reports Oct. 6 said that a meeting between Prime Minister Naftali Bennett and Russian President Vladimir Putin could take place Oct. 22. The reports said that the meeting would focus on Iran and on other strategic regional issues. Still, it seems that the date has not been finalized yet for a Bennett visit to Moscow, and could be postponed. Foreign Minister Yair Lapid visited Moscow Sept. 9 and met there with his Russian counterpart, Sergey Lavrov. The possibility of a Bennett-Putin meeting was discussed on that occasion, but without naming a date.

At his September meeting with Lavrov, Lapid referred to recent reports by the International Atomic Energy Agency (IAEA) about Iran, saying, “The two [IAEA] reports are damning. They include serious violations. Fraud, deception and outright lies. The picture is clear and very worrying. A rapidly advancing nuclear program without any effective supervision. The message to Iran must be loud and it must be clear. Iran's march toward a nuclear weapon is not only an Israeli problem. It's a problem for the entire world."

Lapid himself is scheduled to visit the United States on Oct. 12-14, at the invitation of Secretary of State Antony Blinken. Lapid and Blinken last met in Rome June 27, shortly after Lapid assumed office. Since then, they have spoken on the phone a number of times. Reports say that apart from Blinken, Lapid is expected to meet in Washington with other American senior officials, including US national security adviser Jake Sullivan and Vice President Kamala Harris.

Walla news site said that Lapid’s visit to Washington will focus on Iran. Jerusalem has been pressuring Washington lately to consider other options on the Iran talks. Such options would be needed, argues Jerusalem, in case the talks are not renewed soon or in the case that Tehran refuses to take up the constraints that were included at the time in the original Joint Comprehensive Plan of Action agreement. This message about the necessity of formulating other options is reportedly the message Lapid would relay to his American interlocutors next week.

But what could these options be? One option could be a new set of American economic and other sanctions against Iran and Iranian officials. A second option could be gestures demonstrating to Tehran that there is indeed an American military threat against them.

The issue of the Iranian talks was also discussed this week, at an Oct. 5 meeting in Washington of the US-Israel Strategic Consultative Group. Sullivan hosted his Israeli counterpart, Eyal Hulata, and a senior Israeli interagency delegation at the White House, to exchange views on the different regional threats Israel is facing. The Israeli delegation included senior defense, military, intelligence and diplomatic officials. For the Israeli side, the No. 1 issue was certainly Jerusalem’s concerns over a resumption of nuclear talks with Tehran, but also Iranian terror activities in the region. Jerusalem fears that Iranian-made attack drones will reach the hands of terror groups to be used against Israel.

A White House readout of the Oct. 5 meeting said, "Mr. Sullivan emphasized President Biden’s fundamental commitment to Israel’s security and to ensuring that Iran never gets a nuclear weapon. Mr. Sullivan explained that this administration believes diplomacy is the best path to achieve that goal, while also noting that the President has made clear that if diplomacy fails, the United States is prepared to turn to other options."

The upcoming trips of Bennett and Lapid suggest that Sullivan’s words did not reassure Israel, especially on the backdrop of a meeting Oct. 6 in Moscow, between Iranian Foreign Minister Hossein Amir-Abdollahian and Lavrov. After the meeting, Amir-Abdollahian said that talks on reviving Iran's nuclear deal will resume soon in Vienna.

To this Israeli diplomatic blitz, we can also add the upcoming visit, on Oct. 10, in Israel of outgoing German Chancellor Angela Merkel. Merkel is paying Israel a farewell visit, ahead of leaving office. Among the many events planned for her visit, Merkel is scheduled to meet with Bennett and with Lapid. And while Merkel allegedly carries now little political clout in Europe and on the international arena, the meetings will offer Bennett and Lapid an opportunity to reiterate their message on Iran. They can be sure that Merkel will forward their message to her colleagues in Europe. With France pushing for the resumption of talks with Iran, this could be for Israel no less important than the trips already scheduled.