It was evident in the meeting in Moscow between Israel’s Foreign Minister Yair Lapid and his Russian counterpart Sergey Lavrov that the two countries do not see eye to eye on the Iranian nuclear agreement and Syria. 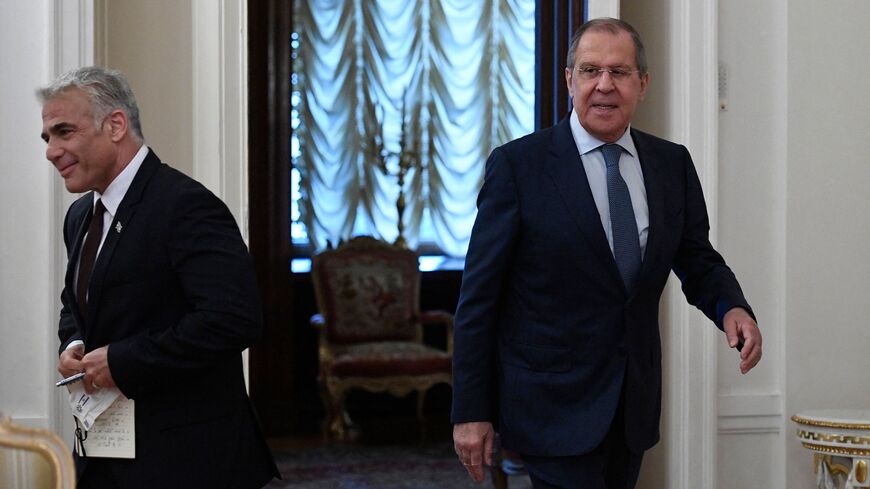 On an official visit to Moscow, Foreign Minister Yair Lapid warned Sept. 9 against Iran exporting terror across the region and maintaining a military presence in Syria. “We all aspire to bring security and stability in our region and to the world. Unfortunately, there won't be stability in Syria, or in the wider Middle East, while there is an Iranian presence. Iran is the world's number-one exporter of terror. It threatens us all. Israel will not sit quietly by while Iran builds terror bases on our northern border. Or while Iran supplies advanced weapons to terror organizations. Weapons intended to be used against us,” noted Lapid after his meeting with Russian Foreign Minister Sergey Lavrov.

Lapid then said that he had discussed with Lavrov the Iranian nuclear program and the danger it poses to the world. “The two [International Atomic Energy Agency] reports are damning. They include serious violations. Fraud, deception and outright lies. The picture is clear and very worrying. A rapidly advancing nuclear program without any effective supervision."

He went on, "The message to Iran must be loud and it must be clear. Iran's march towards a nuclear weapon is not only an Israeli problem. It's a problem for the entire world. A nuclear Iran will lead to a nuclear arms race in the Middle East. And the last thing any of us want, is to see nuclear weapons fall into the wrong hands. The world needs to stop Iran from getting a nuclear capability, no matter the price. If the world doesn't do it, Israel reserves the right to act."

He concluded, "Israel will not allow Iran to become a nuclear state. Or even a nuclear threshold state.”

With his visit marking 30 years of Israel-Russia diplomatic relations, Lapid hailed the two countries' strong bilateral ties. “Russia is one of Israel's most significant and important partners,” he said, adding, “We of course recognize that Russia has key interests in the region. That is why we formed the military deconfliction mechanism –— which is both necessary and effective.”

Lapid was referring to a mechanism put in place during the Netanyahu government to ensure aerial coordination over Syrian skies and avoid miscommunication between the air forces on both sides. This mechanism proved useful for a few years, but lately Moscow has been expressing dissatisfaction over alleged Israeli aerial attacks in Syria. On Aug. 21, the Russian military said that Syria’s air defense forces had shot down 22 missiles allegedly launched by Israeli warplanes. Sept. 3 reports read that possible shrapnel from a Syrian air defense missile had landed in the Tel Aviv region after the projectile apparently exploded in the air. The Syrian state news agency SANA claimed that Israeli planes carried out airstrikes near Damascus early Sept. 3 and that explosions were heard in central Israel shortly after.

Lapid and Lavrov seemed to focus on his respective country's agenda. Lapid did not mention the Palestinians in his initial remarks, but highlighted the Iranian portfolio. Lavrov did not mention Iran, but did say that Russia will continue to support organizing direct peaceful dialogue between the Israelis and the Palestinians, including through the Middle East Quartet. Asked by the press about the Quartet, Lapid responded that Israel was not opposed to an upcoming meeting of the body, “but right now there is nothing of the sort on the table.”

Lapid and Lavrov agreed that Prime Minister Naftali Bennett and Russian President Vladimir Putin should meet soon, perhaps next month. Still, despite the warm welcome Lapid received, Jerusalem is worried over Moscow’s support of the nuclear deal with Tehran. While Lapid met with Lavrov, US special representative for Iran Rob Malley was also in Moscow for talks. According to an official Russian statement, Malley and Russian Deputy Foreign Minister Sergei Ryabkov will continue talks on a renewed nuclear accord.