Despite Russia’s long diplomatic support for the country, Iran may ultimately present more challenges than opportunities for Moscow as it enters the world energy market. 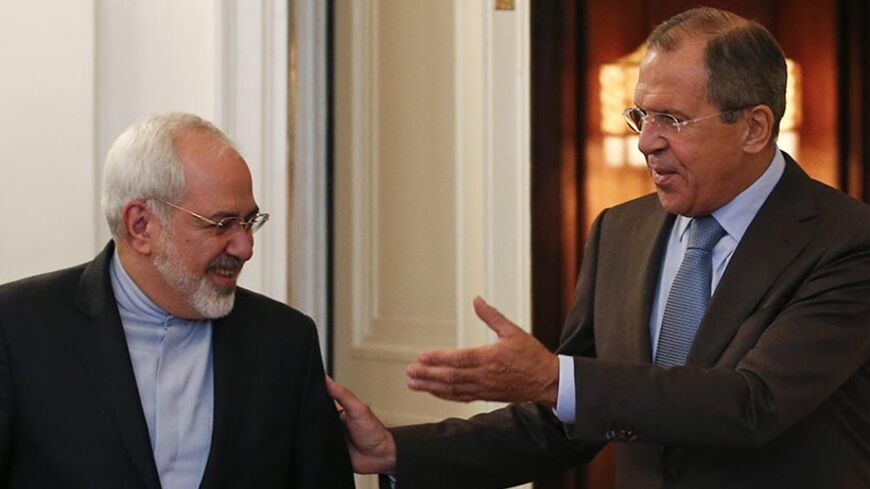 With fighting raging in Iraq and Ukraine, Iran’s Foreign Minister Mohammad Javad Zarif traveled to Moscow to meet his Russian counterpart, Sergey Lavrov, on Aug. 29. Notwithstanding an evident lack of new agreements, the two top diplomats stressed the close alignment of their perspectives on key issues, including ongoing talks on Iran’s nuclear program, their opposition to the Islamic State (IS) and support for a political settlement of Syria’s continuing civil war. Nevertheless, some important differences clearly remain.

Predictably, Lavrov reiterated Moscow’s support for Iran’s right to enrich uranium, stating, “Russia consistently advocates such a decision that would be based on respect for Iran’s right for peaceful nuclear activities, including uranium enrichment, with all the peaceful activities placed under [International Atomic Energy Agency] control." Likely referring to US and European reluctance to reach an agreement that permits enrichment, he cautioned Western negotiators against pressing Tehran too hard to advance their own objectives at Iran’s expense as the Nov. 24 deadline for a deal approaches.

“Some of our partners have temptations and attempt to use artificial time elements to get just a little more than is necessary to provide a balanced and fair package,” Lavrov said. Zarif said that Iran appreciates “Russia for its logical stance on Iran's nuclear technology."

Likewise, the Russian state media service ITAR-TASS — the successor to the Telegraph Agency of the Soviet Union (TASS) — quoted Lavrov as stating that Iran’s participation was necessary in settling regional crises, apparently referring not only to Iraq and Syria, but also to Afghanistan. “Our partnership is based, aside from history, on the closeness of positions on most of regional and international issues. Cooperation plays a weighty role in stabilization of the situation in the Middle East and Central Asia.” Russia’s foreign minister also repeated his past call for Iranian participation in a settlement in Syria. When asked about fighting terrorism, Lavrov went somewhat further, stating that he and Zarif had discussed creating “an international coalition against terrorism” including Russia and Iran and denounced those who apply “double standards” to terror. Lavrov was clear enough in explaining who he meant, complaining that some are prepared to fight IS in Iraq, but not in Syria. Zarif echoed this statement, saying, “Events that happened over the past several months demonstrate that we share a common stance while many others who had a different point of view made a strategic mistake.”

In remarks to reporters following the meetings, Lavrov said that the talks also covered a variety of other topics, including Afghanistan, a forthcoming Caspian Sea summit and bilateral trade. Also notable was Zarif’s announcement that “Within a month we will hold another two high-level meetings.” It seems likely that one of these may happen during the UN General Assembly in New York.

Notwithstanding the apparently positive tone of the Lavrov-Zarif talks, however, there is enduring tension in Russia’s relationship with Iran. Curiously, for example, Iran’s FARS News agency chose precisely the day of the talks in Moscow to run an article headlined “Iranian version of Russian S-300 starts operation,” highlighting Tehran’s ongoing $4 billion lawsuit over Russia’s refusal to deliver the air and missile defense system after signing a contract with Iran. The text quotes senior Iranian military officers as describing Iran’s newly-produced indigenous Bavar-373 system as “more powerful” than Russia’s S-300 system and claiming that it has “higher capabilities” including “better agility, mobility and precision.” An air base commander proudly declared that the Bavar-373 “has fired a first successful shot.”

Whatever capabilities the Iranian missile defense system may have (or not have), the timing of the FARS report suggests a deliberate effort by Tehran to signal that Iran is not as dependent on Moscow as some in Russia may think or, alternatively, that there is some division inside Iran’s foreign policy and national security establishment over the relationship with Russia. In the former case, Iran could be attempting to strengthen its bargaining position in seeking to settle the lawsuit by implying that it no longer needs the S-300s and simply wants compensation. In the latter, Iranian generals skeptical of Moscow could be attempting to embarrass Zarif and make their own case.

There is also a third possibility, of course: that the military’s announcement while Zarif was in Russia was merely a coincidence, reflecting poor coordination rather than any real difference in views. Taking into account clear differences in Iran over relations with Washington, however, it seems unrealistic to expect a full consensus on how to deal with Moscow or any other foreign government.

In the longer term, Iran’s energy resources cannot but pose challenges for Russia if the nuclear talks eventually succeed and Tehran escapes sanctions. Some Russian officials clearly understand this — a deputy finance minister has acknowledged that despite predictions from Russia’s Ministry for Economic Development, “The geopolitical factors that have always supported oil prices at a high level … may now weaken somewhat and, as a result, we fear oil prices may be significantly lower than $100 [per barrel].” He identified growing oil supplies from Libya, signs of stability in Iraq and progress in the Iran talks as possible sources of downward pressure on oil prices — something that could have significant consequences for Russia’s federal budget, which depends heavily on oil-related revenue.

Iran’s enormous gas reserves could be another major problem for Russia, in that many consider Iran to be the most economically attractive alternative source of natural gas imports for Russia. Whatever the eventual outcome of the Ukraine crisis, the European Union seems likely to intensify its efforts to reduce dependence on gas imports from Russia — something that will make Iran even more attractive if it is under reduced or no sanctions. Gas produces far less revenue for the Russian state than oil, but Russia’s gas monopoly Gazprom is a major economic actor with nearly half a million employees among all its entities and subsidiaries. Economic pressure on Gazprom could ripple through much of Russia’s economy.

From this perspective, Iran may ultimately present more challenges than opportunities for Moscow. Russian leaders may seek to co-opt Iran into a gas cartel — Russia has great ambitions for the Gas Exporting Countries Forum — but this seems unlikely to succeed. Even the Organization of Petroleum Exporting Countries, which has a stronger track record, has a difficult time setting and enforcing production quotas and does not attempt to assign particular markets to individual suppliers. Absent such understandings, only Iran’s gratitude for Russia’s long diplomatic support would constrain new gas deals to Europe. And if world politics and history demonstrate anything, they show that governments are always more grateful for future favors than past ones.