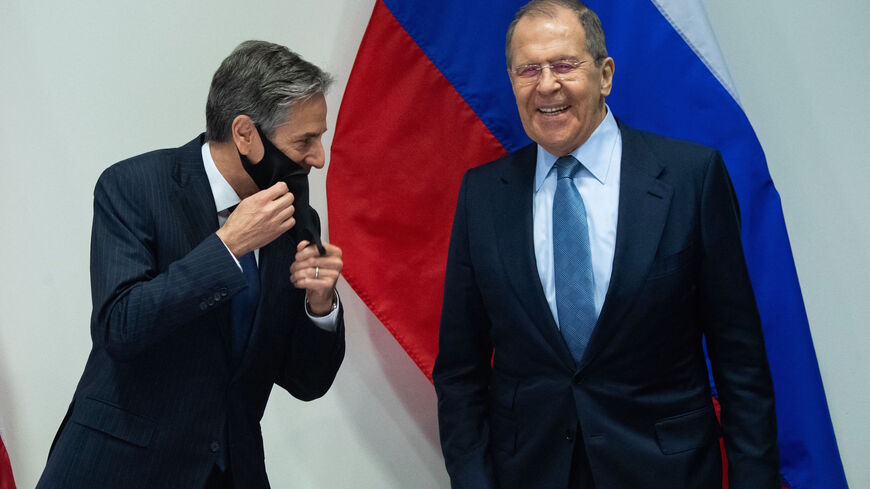 US Secretary of State Antony Blinken and Russian Foreign Minister Sergey Lavrov (R) laugh as they arrive for a meeting at the Harpa Concert Hall in Reykjavik, Iceland, May 19, 2021, on the sidelines of the Arctic Council Ministerial summit. - SAUL LOEB/POOL/AFP via Getty Images

“The interlocutors exchanged opinions on prospects for resuming full-scale implementation of the Joint Comprehensive Plan of Action (JCPOA) on settlement concerning the Iranian nuclear program,” the ministry said in a readout of the phone call.

The Biden administration hopes to return the United States to the nuclear accord, which offered Iran sanctions relief in return for limits on its nuclear program. Former President Donald Trump unilaterally withdrew from the JCPOA in 2018 and reimposed tough economic sanctions.

Tehran responded by gradually breaching its obligations under the multilateral agreement. A senior official told reporters on Monday that Iran’s nuclear progress is “alarming,” particularly its growing stockpile of enriched uranium.

Talks in Vienna between Iran and the five remaining signatories to the deal — Russia, China, France, Britain and Germany — have been on hold since the election of Iran’s new hard-line president, Ebrahim Raisi, in late June.

Last month, Lavrov called on Washington to take a more active role in reviving the stalled talks, adding he hoped talks would resume "as soon as possible."

Lavrov also met with his Iranian counterpart, Hossein Amir-Abdollahian, on Wednesday. In recent weeks, Amir-Abdollahian has signaled that Iran is willing to return to the negotiating table but has not given a specific date for a seventh round of talks.

“I emphasized that we are now finalizing consultations on this matter and will soon restore our negotiations in Vienna,” the Iranian foreign minister said in Moscow on Wednesday.

The Biden administration has warned that the window is closing for Iran to return to the talks and resume compliance under the 2015 deal. On Tuesday, White House national security adviser Jake Sullivan told his Israeli counterpart, Eyal Hulata, that the United States believes diplomacy is the best way to curb Iran’s nuclear ambitions.

“Diplomacy is the best path to achieve that goal, while also noting the president has made clear that if diplomacy fails, the United States is prepared to turn to other options," a White House statement said.