On the strategic level, the visit of US President Joe Biden to Israel generated mixed results, but on the level of image and intimacy, Biden captured the hearts of Israeli citizens. 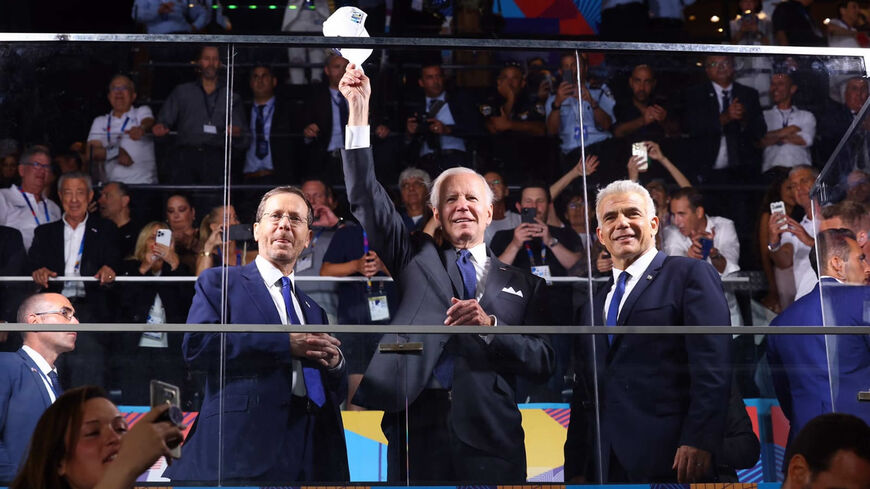 US President Joe Biden’s visit to Israel could not have come at a better time for Israeli Prime Minister Yair Lapid. Just two weeks after taking office, Biden’s visit was tailormade to present Lapid as the stuff of which prime ministers are made, embraced by the leader of the world's largest superpower, less than four months before he faces opposition leader Benjamin Netanyahu at the polls. What's more, Lapid did not have to ask. The visit landed in his lap, a combination of geopolitical and political circumstances.

Follow here for live updates on Biden's visit to the region

In all other aspects, Biden’s two-day visit was a mixed bag. "We have restored confidence in America and the Democratic Party," a top Israeli political official told Al-Monitor on condition of anonymity minutes after Biden's departure for Saudi Arabia July 15. "We have also restored intimacy. We have broadcast to the Middle East and to the entire world images that reflect extraordinary power, we have signed a strategic declaration with the United States, we have deepened our strategic dialogue. These are not trivial things."

However, the senior official avoided addressing the key matters on which the visit failed to yield progress. The Americans are unwilling, despite the pleas of both Lapid and President Isaac Herzog, to set a deadline for the negotiations on Iran’s nuclear program, nor to draw a "red line" that if crossed by Iran would turn talk into action.

Maj. Gen. (Res.) Amos Yadlin, former head of military intelligence, defines this red line as a "trip wire," a certain point that if crossed by Iran would set in motion an agreed-upon American-Israeli mechanism presenting a real, convincing and powerful military option.

"America is a superpower," a senior Israeli security official told Al-Monitor on condition of anonymity. "It is reluctant to set such deadlines and make such statements, because when you are a superpower, red lines have meanings. When someone crosses them, you are obliged to act. Biden doesn't want to tie himself to this kind of commitment."

On what, then, did the sides agree?The answer is complicated. No precise or official deadline for reaching a deal with Iran, no "trip wire" to trigger a chain of responses culminating in a military attack. There was mutual understanding between Israel and the United States that decisions will have to be made in the not-too-distant future, including operational planning. The sides also agreed that military grade (90%) uranium enrichment or weaponization, i.e., the ability to mount a nuclear warhead on a ballistic missile, would necessitate a "Plan B" against Iran.

These are quiet understandings, a "nod and wink," but not an operative plan. Biden’s visit did not deliver on this crucial point. The Americans continue to prefer an agreement over all the other options ticking on the table.

In other respects, the visit conveyed images of power and intimacy. Disembarking from Air Force One July 13 at Israel’s Ben Gurion Airport, Biden was met by the country’s top leadership — Prime Minister Lapid, Defense Minister Benny Gantz and army Chief of Staff Aviv Kochavi. Also on hand were the project directors of two key anti-missile defenses, the operational Iron Dome system and the Iron Beam laser-based system under development, who along with Gantz provided him with an overview of these systems, funded in part by the United States.

At the Yad Vashem World Holocaust Remembrance Center, Biden dropped to one knee in front of two elderly Holocaust concentration camp survivors who had lived in the United States after World War II before moving to Israel. Departing from his schedule, Biden took time to speak to them at length, hugging and kissing them and appearing to wipe away a tear.

Yet another powerful image was conveyed by a four-participant Zoom conference between Biden and Lapid in Jerusalem, Emirati ruler Mohammed bin Zayed Al Nahyan in the United Arab Emirates (UAE) and Indian Prime Minister Narendra Modi in New Delhi.

This week, Biden corrected the crass mistake (in Israeli eyes) of former Democratic President Barack Obama, who dedicated his first visit to the Middle East in 2009 to Egypt and Saudi Arabia in a bid to turn the page in US relations with the Muslim world, skipping Israel.

Judging by the wall-to-wall coverage of the visit, with analysts hailing all the moves and gestures of the American leader, Biden clearly captured the hearts of Israelis. He managed that despite being considered a political "leftist" in Israeli terms, and an antithesis to his predecessor Donald Trump, who is more popular in Israel than in the United States. Biden was warm, attentive and sometimes funny. His love for Israel is clearly authentic and inspires trust. He is not ashamed of it, taking pride in it. Israelis love it, ignoring the fact that Biden is the last Democrat of his kind.

The "Jerusalem Declaration" signed by the two leaders during the visit, which spoke of the values shared by their countries, could become irrelevant if Israel continues its slide to the right, becoming more conservative and religious, less democratic and liberal. Israel’s distancing from the Democratic Party in recent years and from the mainstream of American Jewry is one of the most worrisome processes that threaten Israeli national security these days.

After them, the leaders. With Prime Minister Lapid he had excellent chemistry. Both are blessed with great personal charm. Defense Minister Gantz gave Biden an overview of Israel’s aerial defense capacity, described by a security official present at the air-conditioned airport tent as "close to mesmerizing."

Last but not least, President Herzog. Both have Irish roots — Herzog's father and mother, and Biden's father — referring to them publicly during a ceremony at the president's residence in Jerusalem, where Biden received an Israeli presidential medal.

From there, Biden set out to participate in the opening ceremony of the Maccabiah, the second-largest sporting event in the world attended by Jewish athletes from all over the globe. Biden joked and spoke at length with members of the American delegation, received a Maccabiah cap and seemed to enjoy every moment. He may have been repressing what awaited him on his next stop, in Saudi Arabia.