Just four months ahead of general elections in Israel, US President Joe Biden's visit is sure to have an affect on Prime Minister Yair Lapid's campaign. 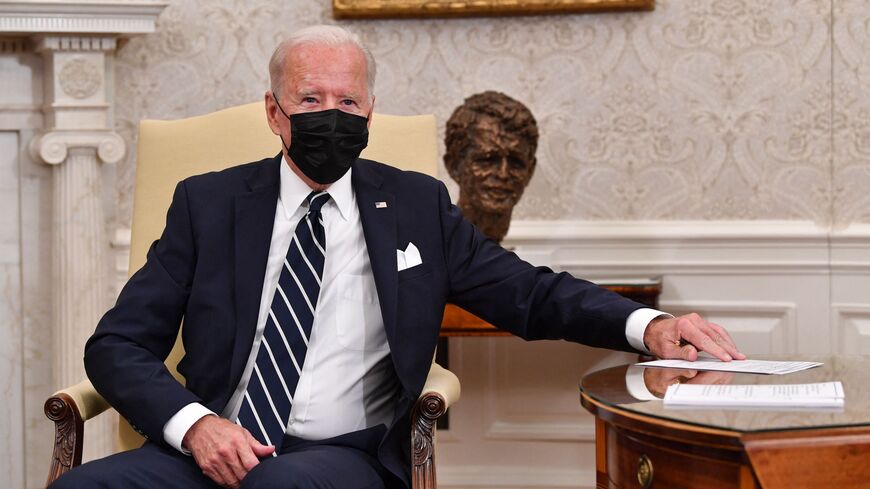 US President Joe Biden speaks as he meets with Israeli Prime Minister Naftali Bennett in the Oval Office of the White House in Washington, DC, on Aug. 27, 2021. - NICHOLAS KAMM/AFP via Getty Images

Shortly after landing at Ben-Gurion Airport on July 13, hearing speeches by President Isaac Herzog and Prime Minister Yair Lapid and delivering a short address himself, US President Joe Biden will be taken to a military base at Palmachim on the Mediterranean coast. There, his hosts will show him the best merchandise and top-of-the line technology that the Israeli defense industry has to offer, specifically a laser-based missile interception launcher in development with US funding and for which Israel has high hopes as a strategic tie-breaker in the Middle East.

The launcher, which experts estimate will be operational in about 18 months, is being touted as a powerful response to the huge stockpile of rockets and missiles held by Hezbollah and being modified into precision rockets by Iran. Unlike the Israeli-developed Iron Dome missile interceptor, whose interception capabilities are limited in scope, the laser would be able to handle a large number of simultaneous launches.

Israel is expected to ask Biden to increase American funding for the development of the laser interceptors that will greatly improve the peace of mind of Israel’s new allies in the region, among them Saudi Crown Prince Mohammed bin Salman and Emirati President Mohammed bin Zayed, whose countries are highly vulnerable to the ballistic threats of the Shiite axis, from Tehran through Beirut to Sanaa.

The visit of an American president to Israel and its neighbors is always a major event and this one will have particular bearing on domestic politics. Lapid, who took office a little over a week ago, needs all the photo ops he can get to bolster his image as a world leader ahead of the Nov. 1 elections, while Biden needs all the help he can get for the Democrats in the November midterms.

Also on the agenda is a brief meeting with Lapid’s rival, opposition leader Benjamin Netanyahu, the last person the White House wants to see in the prime minister's office in Jerusalem six months from now, but protocol dictates are binding.

Hezbollah, according to recent reports, launched three unmanned aerial vehicles toward Israel's Karish gas-drilling platform in the Mediterranean. The Israeli-Lebanese conflict over the borders between their economic waters has far-reaching economic and geopolitical consequences, given the abundance of gas reservoirs still to be discovered.

"This is how the next war between Israel and Lebanon will begin, and perhaps between Israel and the entire northern front," a senior Israeli military official told Al-Monitor on condition of anonymity. "The drones may have been unarmed, but this is the first time that Hezbollah has targeted an Israeli gas reservoir with actions, not words."

Lapid warned this week that the Lebanese government “needs to rein in Hezbollah” or Israel “will be forced to do so.” However, Israel has not retaliated. "There is a clear desire to avoid risks before the president's visit," a senior Israeli political official told Al-Monitor on condition of anonymity. "Had we not been expecting Biden's visit, Beirut residents might well have heard supersonic booms late at night."

Defense Minister Benny Gantz was clear. "Hezbollah must understand that the mission it is carrying out on behalf of Iran could become a deadly mission that will first and foremost harm the interests of Lebanese citizens,” he said, adding, “Israel reserves the right to respond."

Hezbollah's drones were intercepted in a combined operation by military intelligence, the navy and the air force. Among the interception systems used was the Barak-1 naval missile system developed in Israel decades ago.

More advanced systems like the Barak 6 are now in service and much sought after by Israel’s weapons clientele. These systems and technology are surely being employed as incentives in hectic US-led efforts to establish a regional anti-Iran alliance of air defense and aerial warning systems, led by Israel.

In March, a meeting was reportedly held under US auspices between the army chiefs of Israel and Saudi Arabia and attended by high-ranking officers from Egypt, Jordan, Qatar, Bahrain and the United Arab Emirates. Biden could announce the launch of this alliance during his visit as well as news about progress in Israeli normalization with Saudi Arabia. The Americans have heavily pressured Riyadh to make a significant gesture to Israel.

Ahead of the Biden visit, Gantz met with Palestinian President Mahmoud Abbas in Ramallah on July 7 to coordinate expectations, strengthen security cooperation and formulate an Israeli benefits package for the Palestinian Authority. The United States has made clear it expects progress in relations between the sides and perhaps feelers on resumption of political negotiations between them.

In preparation for the visit, as a sign of goodwill, the Americans convinced the Palestinians to hand over the bullet that killed journalist Shireen Abu Akleh in May. The ballistics test of the projectile, carried out with Israeli participation, did not conclusively settle the debate around the journalist's death during a counter-terrorism Israeli raid in the Jenin refugee camp. Israeli forces are still the top suspect, although their alleged guilt will probably be impossible to prove.

The Americans expect Lapid to take measures to alleviate Palestinian rage over the death of the popular journalist and the violent conduct of the Israeli police toward mourners during her Jerusalem funeral. Lapid will have a hard time making any conciliatory moves toward the Palestinians, as doing so could cost him dearly less than four months before he faces Netanyahu at the polls.

An interesting initiative under discussion ahead of the presidential visit is an online meeting between Biden and Lapid in Israel and the UAE’s Crown Prince bin Zayed and Indian Prime Minister Narendra Modi in their respective capitals. The economic, technological and infrastructural potential in such a meeting is enormous.

Ahead of the visit, Gantz told Israeli journalists that in the past two years, since the signing of the Abraham Accords, Israel has exported $3 billion worth of weapons and defense technology to countries in the Middle East, 20% of its total defense exports during the period. He also revealed that since the signing, 150 security-related meetings have been held between Israeli officials and their Middle Eastern counterparts. Israel expects Biden to further boost the rapid progress in relations between itself and its neighbors.

Sensitive issues will also come up during the visit, chief among them world powers’ negotiations with Iran. Israel hopes Biden will report that the chances of signing a nuclear agreement between Iran and world powers are not high and that he will promise the sanctions on Iran will not be lifted but rather tightened.

The US side, for its part, is expected to raise objections to Israeli construction in the West Bank and Israeli military incursions into the Palestinian-controlled Area A of the West Bank following a recent wave of attacks in Israel.

One particularly sensitive agenda item is the brewing crisis between the two countries over Israel’s offensive cyber capabilities. Senior Israeli officials feel the US blacklisting in November 2021 of Israeli spyware companies NSO and Candiru could plunge the industry into crisis. Israel has been urging the United States for some time to lift the restrictions on these two companies. It will be sure to appeal directly to the president as well.