Israel advances with the development of a laser-based missile interceptor system that should significantly change the balance of powers in the region. 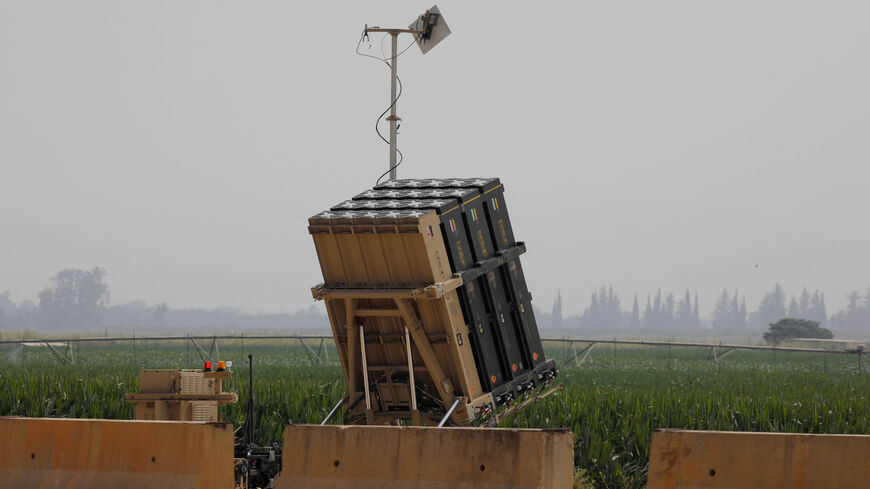 Israel successfully completed the main trial stage of an innovative, first-of-its-kind laser interception system this week. Once it is declared operational, the Iron Beam system will be able to intercept cruise and ballistic missiles, explosive-laden drones, mortar shells and even anti-tank rockets at the speed of light.

“This is a real game changer,” a senior Israeli military official told Al-Monitor on condition of anonymity. The official explained that the system would be operational within a year or two and join the three other anti-missile systems in Israel’s air defense arsenal — Iron Dome, Arrow and David’s Sling — to provide it with the most advanced interception capabilities in the world. “It will create a wall against the missile threat around Israel, strategically changing the face of the Middle East,” the official said.

At the turn of the millennium, Israel Defense Forces (IDF) Chief Moshe Yaalon predicted that Hezbollah’s rocket and missile arsenal would eventually “rust away.” His prediction was not borne out. Several years later, in 2006, Hezbollah fired thousands of rockets and missiles at Israel, killing at least 165 Israelis and causing extensive damage in the 34-day Second Lebanon War. Israeli authorities say the Iranian proxy organization has since amassed some 150,000 projectiles of various kinds, a small number of which are believed to be precision missiles.

Israel has been conducting an intense, prolonged military campaign against Hezbollah’s efforts to turn as many of its rockets as possible into smart, precision models by using special kits installed on them. According to Israeli intelligence assessments, Hezbollah now has several dozens of these advanced model missiles.

Experts are divided on whether Israel should continue its campaign against the precision missile project even at the cost of going to war once such an arsenal reaches a crucial tipping point. Israel is well aware that hundreds of precision missiles in the hands of Hezbollah are a game changer potentially undermining its ability to deploy the air force and risking heavy damage to the country. It has also long believed that laser-based interception systems could resolve this dilemma without resorting to war.

Some 15 years ago, Defense Ministry Director General Pinhas Buchris flew to the United States to examine the laser-based Nautilus and other interception systems, but concluded that the chemical-based laser interceptors were unwieldy and not operationally feasible. Along with developing the short-range Iron Dome interception system, Israel set out to develop a laser system based on flexible, easier to operate electric technology.

The first test was conducted last year, with the system fitted onto a small Cessna aircraft intercepting multiple unmanned aerial vehicles (UAVs) fired at it from different directions. The series of tests conducted this week used a ground-based system firing laser beams produced by a 100-kilowatt electricity source.

“This is a historical moment for weapons systems. For the first time, an energy-based weapons system actually works. I am not talking about ideas, but a system that works,” said Brig. Gen. Yaniv Rotem, head of the Defense Ministry’s research and development arm.

Prime Minister Naftali Bennett tweeted, “This is the world’s first energy-based weapons system that uses a laser to shoot down incoming UAVs, rockets & mortars at a cost of $3.50 per shot.”

The system is being developed in cooperation with two major Israeli defense contractors — Elbit and Rafael — which were also instrumental in the Iron Dome project. Named “Iron Beam” in English, its Hebrew name “Magen Or” translates into “light shield,” but in addition to its defensive capabilities, it is also an offensive system. “The system will also be installed on air force aircraft, and deployed on the ground at key points in a way that covers all the threats facing Israel. Its advantages are in speed, operational flexibility, availability of interception and ability to deal with multiple launches simultaneously, at a low cost,” a senior Israeli security official told Al-Monitor on condition of anonymity.

The innovative system has attracted growing world interest, with senior officials from dozens of countries, including some that do not have official diplomatic relations with Israel, visiting Israel in recent months to get a peak. “We cannot respond to all those who have contacted us, at this stage,” the Israeli security official added, “Our top priority is first of all to address Israel’s needs and only then examine supplying the system to our allies.”

While Iron Dome has proven highly effective in intercepting short-range rockets from the Gaza Strip, it will be unable to provide Israel with maximal protection in case of an extensive flare-up along its northern front. It has already proven limited in dealing with heavy barrages of multiple rockets fired simultaneously from Gaza, and will not be able to intercept hundreds or thousands of missiles fired daily by Hezbollah.

Iron Dome’s cost is also prohibitive, with each Tamir-model interceptor going for $50,000 to $100,000, whereas the missiles it intercepts cost a fraction of this, especially those that come off the Gaza Strip assembly line. “While our enemies will be unable to gain a decisive victory over Israel, they could lead us to bankruptcy,” the Israeli security official said. In this sense, too, the laser-based interception is a fundamental paradigm change. While the initial outlay for the system is high, the cost of operating it will be negligible. The interception speed will also be much faster, enhancing the system’s ability to intercept the heaviest missile barrages.

The laser era will undoubtedly result in a strategic change in the Middle East. As of now, Hezbollah’s missiles are the main threat facing Israel, being much more powerful than most countries’ arsenals, except those of world powers. Laser interceptions, combined with Iron Dome’s kinetic ones, would be tantamount to the effects of the subterranean anti-tunnel wall Israel built to block tunnel-based incursions into Israel by Hamas and Israel’s operation against the tunnels dug by Hezbollah on its northern border.

“If that happens, Hezbollah’s rockets may end up rusting away after all,” the Israeli security source said. “That means lower prospects of war on our northern front, as well as less resulting destruction for Lebanon and Israel. All in all, this is good news.”