Is Israel prepared for all missile threats?

Israel's now-operational David Sling’s medium-range missile defense system, along with the rest of its arsenal, should assist the country in protecting itself against any coordinated attack by Hezbollah, Hamas, Islamic Jihad and Iran. 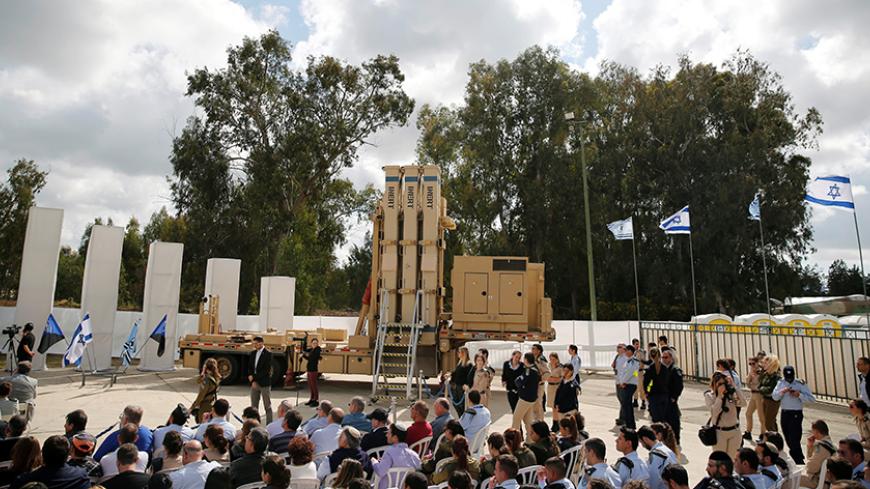 The David's Sling missile defense system can be seen during a ceremony in which Israel declared the defense shield fully operational, at Hatzor air base, Israel, April 2, 2017. - REUTERS/Amir Cohen

On April 2, the Israel Defense Forces (IDF) received its first operational Magic Wand mid-range anti-missile system (also known as David's Sling). In the future, this advanced weapons system will also be able to handle cruise missiles. The incorporation of Magic Wand into Israel's missile defenses complements Israel's other anti-missile systems such as the Arrow and Iron Dome. It provides Israel with a perfect, multilayered response to almost all of the ballistic threats posed by the rockets and missiles in its enemies' arsenals. Iron Dome can intercept short-range Qassam and Grad rockets fired at it by Hamas from the Gaza Strip, as well as short-range rockets that Hezbollah might fire. The Arrow anti-missile system (Arrow 1, Arrow 2 and the new Arrow 3 archetype) is designed to intercept long-range ballistic missiles such as Iranian Shahab missiles, which follow a suborbital trajectory outside the atmosphere. Shahab missiles are designed to carry particularly heavy payloads, including nuclear warheads. Magic Wand is the final piece of the puzzle. It is designed to intercept mid-range missiles such as Scuds.

Israel may be the first country in the world with such a multilayered defense system, yet it has already proven its mettle in several operational trials. In 2014, Iron Dome had an impressive record intercepting Hamas rockets fired during Operation Protective Edge, almost completely eliminating the strategic missile threat posed by Hamas to the Israeli Home Front.

A few weeks ago, on March 17, Israel's Arrow missile also received an unanticipated public unveiling when it successfully downed a failed Syrian surface-to-air anti-aircraft missile (SAM) fired at Israeli air force jets during a sortie in northern Syria. Syria's antiquated, heavy missile missed the aircraft, reached high altitude and then began falling back to earth. Once the Arrow's sophisticated radar system recognized that it would fall in Israeli territory, posing a significant threat, it immediately initiated the automatic firing of an Arrow missile at the SAM, which it intercepted successfully. Nevertheless, no one in Israel was particularly happy about this, since it forced the country to admit that it had launched an attack on Syria. While Russia issued a formal reprimand, the Israeli leadership, particularly its defense establishment, reconsidered its initial reservation. As it turned out, they were pleased by this tangible evidence that the Israeli Home Front now benefits from a level of defense unprecedented anywhere else in the world.

Despite these achievements, Israel is still far from being fully impervious to the ballistic threat posed by its enemies. It is estimated that Hamas, Hezbollah, Islamic Jihad and Syria now have about a quarter of a million rockets and missiles between them. In the most extreme scenario, with Iran joining the melee, the number of missiles increases considerably.

The most ominous threat now facing Israel is the possibility of a surprise rocket and missile attack in which all of its enemies — Hezbollah, Hamas, Islamic Jihad, Syria and Iran — fire tens of thousands of rockets and missiles at Israel in a single day, in a coordinated attack. Israel compares such a scenario to the "1973 Yom Kippur surprise," in which Egypt and Syria attacked Israel simultaneously. As of now, Israel has no response to such an attack.

The assessment is that, in such a scenario, the Israeli air force will successfully destroy thousands of long-range missiles and launchers, mainly those belonging to Hamas and Hezbollah. Similarly, Israel's missile defense systems will intercept many more missiles. Nevertheless, the Israeli Home Front will still suffer hits from thousands more rockets and missiles, the most accurate of which could reach Israeli air force bases, impeding the air force's capacity to respond. One senior Israeli military official told Al-Monitor on condition of anonymity that "the only response to such a threat is deterrence. Our enemies know exactly what price they will pay for initiating such a move, and it will be much higher — incomparably higher — than the price paid by Israel."

But Israel's defensive systems must also deal with another challenge, i.e., extremely short-range rockets whose range is measured in hundreds of meters to just a few kilometers from the border. While these kinds of rockets are for the most part very primitive and basic, the fact that they are in the air for no more than a few seconds makes it difficult to some extent for existing anti-missile systems to identify, pinpoint and hone in on them, and to intercept them on time. With this kind of threat, the impact of the more ancient rockets is actually the most dangerous one. During Operation Protective Edge, the IDF paid an especially high price in the number of soldiers killed by mortars at meeting points along the border.

Hezbollah has begun developing enormous mortars with explosive warheads that are much heavier than those of regular mortar shells. Their short, steep trajectory could make it especially difficult for Israel to shoot them down. In other words, they could threaten IDF soldiers taking up position along the northern border, as well as adjacent Israeli localities. It is estimated that integrating laser-guided interceptors as an additional part of the solution to the threat will provide an adequate response to this problem.

In this clash of minds and developments, Israel leads the rest of the world by several orders of magnitude. On the other hand, this has resulted in an internal debate among defense experts within the country. Israel's approach to defense has always been based on three pillars: deterrence, warning and guaranteeing a decisive outcome. The fact that Israel's enemies are aware of its enormous power deters them from engaging in confrontations. Israel's intelligence agencies provide warning of its enemies' hostile intentions well in advance, and the IDF has the ability to shift the conflict to enemy territory and conclude it decisively.

The modern era has reduced the possibility of a decisive outcome in battle considerably. Traditional gauges of victory are irrelevant when a sovereign state is locked in combat against guerrilla groups. In the past decade, Israel introduced a fourth component — defense — to its overall approach to security. It is an element that has not figured as prominently before now. A tangible example of this new component is the multilayered missile defense system, but this leaves many in the defense establishment feeling uneasy. They worry that the systems' defensive capacities could cause the critical operational branches of its military to atrophy. As one senior defense official told Al-Monitor on condition of anonymity, "When the political leadership is unruffled by the 50 days of Operation Protective Edge and the Home Front doesn't suffer any significant casualties, the need for a decisive outcome is not as urgent as it once was. The country's leadership could then evade the need for ground maneuvers or achieving any decisive outcome whatsoever."

Regardless of how they feel about it, however, no one (in Israel) today would agree to forego Magic Wand, Iron Dome or the Arrow missile defense system willingly, at least not until all the rockets and missiles surrounding Israel rust. That is precisely what former Chief of Staff Moshe Ya'alon recommended long ago.