Palestinians react to opening of first US military base in Israel

The Sept. 18 announcement of the establishment of the first permanent US-Israeli military base in the Negev desert, in southern Israel, is evidence of the strategic military cooperation between the Americans and Israelis. 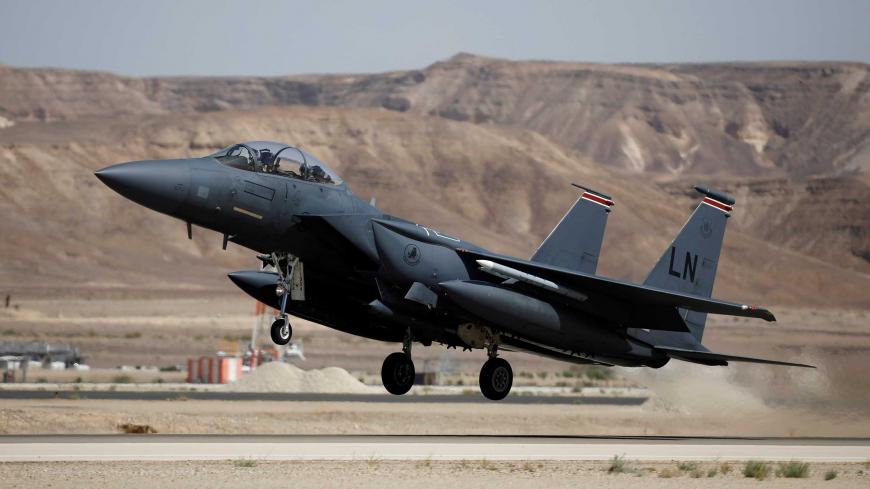 A US F-15 fighter jet takes off during an exercise dubbed "Juniper Falcon," held between crews from the US and Israeli air forces, Ovda Military Air Base, southern Israel, May 16, 2017. - REUTERS/Amir Cohen

The United States and Israel announced Sept. 18 the establishment of the first permanent US-Israeli military base in the Negev desert, in southern Israel.

Despite the long-term military cooperation between the United States and Israel, the establishment of the first US military base inside Israeli territory takes military cooperation with Israel to a whole new level, with US troops present in anticipation of any possible future offensive against Israel.

Brig. Gen. Zvika Haimovich, the head of the Israeli army’s Aerial Defense Command, told Israeli media outlets at the inauguration of the base that this is the first base to be established in Israel with their US friends. “An American flag is flying over the US army base,” he said, adding that this step is not a direct response to any specific incident, but comes in light of the “lessons learned” in the 2014 war in the Gaza Strip and intelligence analysis of future dangers. “We have many enemies around us, near and far,” he noted.

Mohammed Abu Allan, a West Bank-based journalist who covers Israeli affairs, believes the US-Israeli military base is an additional indicator of the importance of the strategic military cooperation between the Americans and the Israelis, which has been materialized with the completion on Aug. 27 of a deal signed in November 2016 to purchase 17 F-35 fighters.

He told Al-Monitor, “According to the Israeli media, this military base is established in light of attempts by Hamas and Hezbollah to obtain high-precision rockets. The objective of this step is to allow Israel to intercept long-range missiles in its next potential war with Hezbollah and Hamas and their main ally Iran.”

Abu Allan said his argument that the joint military base was established in the Negev desert within the scope of a war with Iran and its allies is corroborated by recent Israeli statements. “In his recent speech at the Washington Institute for Near East Policy on Sept. 8, [former] Israel Defense Forces Deputy Chief of Staff Yair Golan said Israel cannot handle Iran alone. Golan’s statements provoked controversy in Israel,” he said.

Abu Allan indicated that only dozens of US soldiers operate the missile defense at the US base in the Negev, which means that in any expected wars, Israel will be relying mainly on technological development rather than on human resources.

Islam Moussa, an expert in military affairs and a researcher at the Palestinian National Security Research Department of the PLO Planning Center, told Al-Monitor, “The announcement of the launch of the US-Israeli missile defense military base by the head of the Israeli army’s Aerial Defense Command confirms that this step complements and crowns years of military cooperation between the two sides, especially in the field of air defense. This is particularly true after the significant progress achieved by Israel in the short-range rocket defense systems such as the Iron Dome that Tel Aviv boasts about.”

He said, “All this pushed the United States to invest in these defense systems, in particular since the US military industries lack a short-range rocket defense system given the great distance between it and its closest enemies across the borders. However, the United States has recently felt the need to protect its military bases in hot spots that may be targeted by short-range rockets.”

Moussa added, “The United States decided to invest about $235 million in this system following reports by Israeli media that the Iron Dome is the best to intercept and destroy short-range rockets, artillery shells and mortars. This also comes after the Iron Dome performance in Israel’s war on Gaza in 2014.”

Moussa also pointed to the US-Israeli collaboration on the David’s Sling missile system, also known as the Magic Wand, which was launched by Israel in April. He explained, “This system was jointly developed by Israeli arms maker Rafael and American missile giant Raytheon and aims to intercept missiles with a range of not more than 1,000 kilometers [621 miles], such as the Syrian-made M-600 and Iranian-made Fateh-110 ballistic missiles.”

On another note, Moussa pointed out that this step occurred after the end of US President Barack Obama’s term during which US-Israeli relations were not at their best, since Obama sought to achieve a breakthrough in the peace process between Palestine and Israel but faced Israel’s intransigent position.

He added, “After [Donald] Trump’s victory, the US-Israeli political relationship got more intimate and the launch of the first US military base in Israel may be the perfect proof. But the timing of this announcement may also be interpreted in light of the Russian expansion in the region.”

It seems that the new era of US-Israeli military cooperation may be an official and direct declaration that the two sides have upgraded their relationship from support to alliance.