The Israeli military is concerned by the failure to intercept a long-range missile fired from Syria. 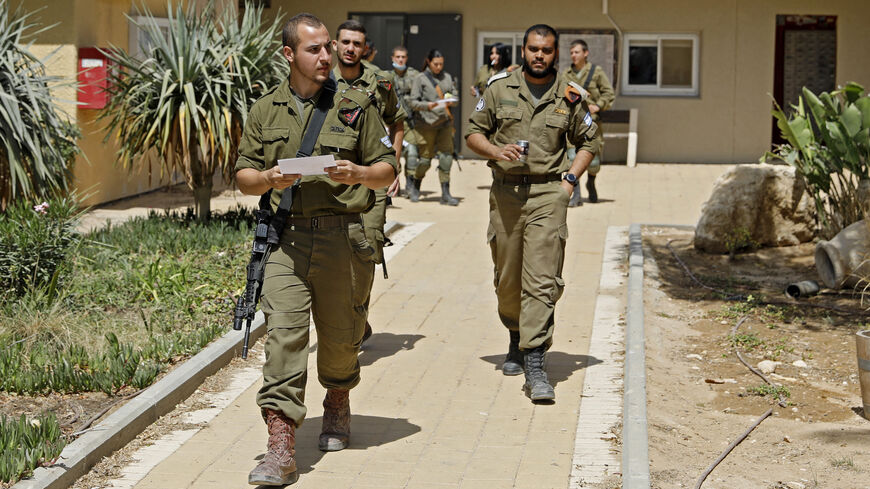 Israeli soldiers search for debris after a missile launched from Syria landed near the Dimona nuclear power plant in Israel's southern Negev desert on April 22, 2021. - AHMAD GHARABLI/AFP via Getty Images

According to Israeli military assessments, the Syrian anti-aircraft missile that exploded in the pre-dawn hours of April 22 near the southern town of Dimona was not targeting Israel’s nearby nuclear reactor. However, the Israel Defense Forces are concerned about the failure of sophisticated anti-missile defenses to intercept the Syrian missile on its 300-kilometer (190-mile) trajectory to such a strategically sensitive area. The Israeli air force is investigating the failed intercept, which raises troubling questions regarding Israel’s defenses in the event of a widespread escalation along its northern front.

Israel has thus far displayed marked self-confidence regarding the effectiveness of its multi-tiered missile interception systems in defending the civilian population and military and civilian infrastructure. The Dimona reactor, which foreign media describe as spearheading Israel’s nuclear capacity, could be considered Israel’s most vital strategic target.

The explosion of a projectile fired from Syria in the skies above the Dimona area prompted immediate suspicion of an Iranian-inspired retaliation against a series of attacks attributed to Israel on Iran’s nuclear infrastructure, specifically the April 11 sabotage at its uranium enrichment plant in Natanz. The concern proved unfounded.

The incident occurred in the wake of a nighttime air strike on targets in the region of the Syrian Golan Heights that Syria attributed, as always, to the IAF. Syrian air defenses launched several Russian-made SA-5 missiles at the attacking aircraft. One of them missed but continued on its southward flight path, exploding in the sky and scattering pieces near Israel’s most protected facility.

Israel’s anti-missile defenses reportedly detected the projectile upon its launch, monitoring its trajectory as it missed its target and continued south. The order to intercept was given from the IAF’s subterranean operations headquarters in Tel Aviv.

Israel’s multi-tiered anti-missile defenses are probably the most varied and sophisticated in the world. Its Arrow defense system is designed to intercept long-range ballistic missiles — Arrow 1 and 2 within the earth’s atmosphere and Arrow 3 above it. The medium-range interception system, named “David’s Sling,” was developed by Israel’s Rafael Advanced Defense Systems and the US defense contractor Raytheon. The David's Sling interceptors, guided by radar and electro-optic sensors, boast great flexibility and have proven to have impressive precision and intercept performance in tests since 2012. The Iron Dome system is designed to intercept short-range missiles and is celebrated for intercepting rockets from Gaza in recent years.

So how did a Syrian anti-aircraft missile, developed in the 1960s, whiz over Israel from north to south without being stopped? The system chosen to head off the Syrian SA-5, apparently either an Arrow or a David’s Sling interceptor, was fired but missed. The missile continued on its way, probably flying over Jerusalem and exploding over the Negev Desert. Some of its pieces landed in a swimming pool in the community of Ashalim, some 30 kilometers (19 miles) from Dimona, and in several Bedouin villages in the region.

No casualties or damage were reported, but Israel’s self-confidence and pride sustained a blow. If it is unable to intercept a single errant, relatively slow-flying missile in the middle of the night, how would it respond to daily barrages of hundreds or thousands of Hezbollah rockets fired from the north?

The IDF has refuted rumors of an Iranian-sponsored retaliation attempt targeting the Dimona reactor. Syrian anti-missile defenses reportedly launched some 900 missiles against attack aircraft over the past year. “This an unprecedented number,” a senior Israeli military official told Al-Monitor on condition of anonymity. “No one in the world fires such quantities of surface-to-air missiles against fighter jets. This is the only theater where it happens.”

Almost all of these Syrian missiles missed their targets, barring the downing of an F-16 fighter a few years ago. Some of the more recent air raids attributed to Israel were carried out by F-35 stealth bombers that evaded the Syrian radar and saved President Bashar Assad the trouble of such intensive and wasteful missile launches.

This is also not the first time a Syrian surface-to-air missile has missed its target and landed hundreds of kilometers away from the launch site. One such rocket landed in Cyprus, another in Lebanon and several in Israel itself. However, this is the first projectile to land near such a sensitive target.

Israel has denied claims that Syria has diverted its anti-aircraft missiles southward specifically to strike targets in Israel. “When you lock onto a plane in the middle of the night, you cannot plan where the rocket you launch will fall,” a senior Israeli military source told Al-Monitor on condition of anonymity. “It is our assessment that this was a coincidence.”

However, the IAF is increasingly concerned by Iran’s precision cruise missile and “suicide” drone capabilities, as demonstrated by its 2019 strike on oil facilities in Saudi Arabia. In order to confront this emerging threat, Israel is now realigning and adapting its interception preparedness. IAF Commander Maj. Gen. Amikam Norkin has ordered that all of Israel’s interception capabilities, all its systems on all tiers and in all regions, be unified under one command and nerve center.

In a few years, once this process is completed, every threat targeting Israel launched from anywhere in the world should show up on one screen at the IAF’s operations center. It will save Israel the kind of dilemma it faced this week of deciding which radar system to deploy, whether to intercept the incoming projectile, whether to issue an all-systems alert and warning sirens and where.

“Once everything is combined under one control and command system, the process will be much easier, faster and simpler,” another senior military source told Al-Monitor on condition of anonymity. Until that happens, however, a troubling weakness has apparently been exposed in what is touted as the most effective and lethal interception system in the world. Israel, with generous US aid, has invested billions of dollars in its missile interception systems and demonstrated impressive, sometimes even stunning capabilities. Syrian rocket parts landing near Dimona point clearly to a flaw in the system’s synchronization.

“It’s a good thing this happened now, the way it did; we will investigate why the missile was not intercepted, why the interceptor missed and where the problem lies,” a former senior military official told Al-Monitor on condition of anonymity. “We will locate the weakness and fix it.”