Despite Israel's extensive missile defense systems, a missile from Syria managed to reach the south of the country. 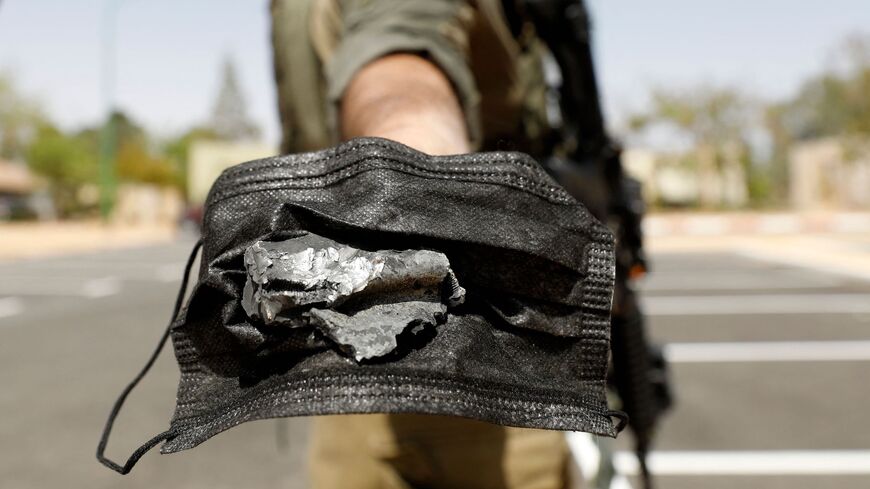 An Israeli soldier holds a piece of debris with a mask after a missile launched from Syria landed in Ashalim settlement, south of Beersheva near the Dimona nuclear power plant in Israel's southern Negev desert, on April 22, 2021. - AHMAD GHARABLI/AFP via Getty Images

Tensions between Israel and Syria are escalating. A missile launched early this morning from Syria reached the south of Israel, setting off air raid sirens near the Shimon Peres Negev Nuclear Research Center in the town of Dimona. Reportedly, the long-range SA-5 missile did not cause any damage. The missile presumably exploded near the Abu Qrenat Bedouin village, with broken pieces landing as far as 30 kilometers (18 miles) away. The explosion was heard as far away as Jerusalem and Rehovot.

The Syrian missile was apparently launched in response to an aerial attack near Damascus. Syrian air defenses reported having intercepted an Israeli attack. The Britain-based Syrian Observatory for Human Rights claims the chain of events started when Israel allegedly hit a Syrian military base, destroying its air defense batteries in the area. The group said Syrian forces fired missiles in response. In retaliation for the Syrian fire, Israel apparently carried out further overnight attacks. The group said that one Syrian officer was killed and and three others were wounded in the Israeli strikes.

After the missile incident, Israel's Army Radio quoted the IDF as saying, "A short while ago, surface-to-air missile fire was identified from Syria, which landed in the Negev area. In response, a few minutes ago, the IDF struck the battery from which the missile was launched and additional Syrian surface-to-air batteries in the area."

The Israeli press has published contradicting reports, with some saying the Syrian missile was not directed toward a specific target and others claiming the missile had targeted an Israeli jet.

Israeli analysts are concerned over the anti-missile defense systems' failure to intercept the Syrian SA-5, noting that in the past year Israel had reported increasing the capabilities of its integrated, multi-layered air defense systems including the Iron Dome, David’s Sling and Arrow.

Defense Minister Benny Gantz acknowledged the IDF's failure to shoot down the missile. Speaking during a press conference convened today to address another issue, Gantz said, "The IDF acted [in Syria] against assets vital in launching a potential attack on the State of Israel. An SA-5 anti-aircraft missile was fired and crossed the border. There was an attempt to intercept it, but it was unsuccessful."

Gantz added the IDF has launched an investigation into the failure, stating, "In most cases we see other outcomes; it's a slightly more complex story. As I said, we will investigate and move forward."

Former head of Israel's Military Intelligence Directorate Amos Yadlin said in an interview today, "The arena is very tense. … Nevertheless, I suggest we take a deep breath. This wasn't an Iranian missile targeting Dimona, although there is a desire to connect this to the incident at [Iranian nuclear plant] Natanz."