Israel's Defense Ministry aims to field a ground-based laser capable of shooting down rockets by 2024. 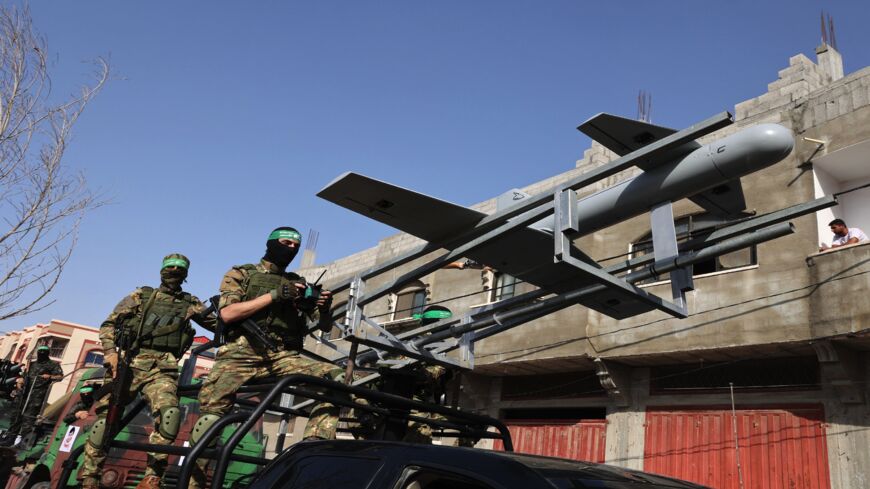 Members of Izz ad-Din al-Qassam Brigades, the armed wing of the Palestinian Hamas movement, parade with a drone in Rafah in the southern Gaza Strip on May 28, 2021. - SAID KHATIB/AFP via Getty Images

The air defense system will be designed for the Israeli government but also open to US markets, according to statements by both firms.

The system will “widen” Israel’s “multilayered air defense umbrella,” Rafael’s executive vice president of marketing was quoted by The Jerusalem Post as saying.

Palestinian militant group Hamas fielded drones in the latest conflict with Israel. The drones, which were not reported to have caused any casualties or damage, closely resembled models developed by Iran, with which Israel and Gulf Arab states are locked in a tense regional rivalry that occasionally turns hostile.

“We are honored to work with the Israeli government and industry to address this critical security need that will support Israel’s national security," Cahill said.

Israel’s Defense Ministry has been experimenting with laser anti-air technology and aims to field a ground-to-air laser capable of downing rockets and other projectile weapons by 2024.

The head of research and development at the Israeli Defense Ministry, Brig. Gen. Yaniv Rotem, told Jerusalem Post’s Anna Aronheim last month that the Israel Defense Forces hopes to deploy a 100-kilowatt anti-rocket laser with an 8- to 10-kilometer range to the Gaza border by 2024.

Last month Israel’s military said it successfully shot down drones for the first time with a high-powered laser mounted on a civilian aircraft. The Defense Ministry cited a 100% success rate in the trial, which involved mounting the system on a Cessna aircraft.

The Defense Ministry is exploring a partnership with US firms to develop the air-to-air weapon, Breaking Defense has reported.

The Biden administration in April agreed to set up an interagency working group with Israeli officials to coordinate on methods to contest precision-guided missiles and drone technology that have proliferated in the Middle East in recent years, largely thanks to Iranian technology.

While the military says Israel’s Iron Dome is highly effective against rocket attacks that follow a high-arc parabolic path, its effectiveness against low, straight-flying drones has not been proven.