Israel open to teaming up with Gulf states on missile defense, official says 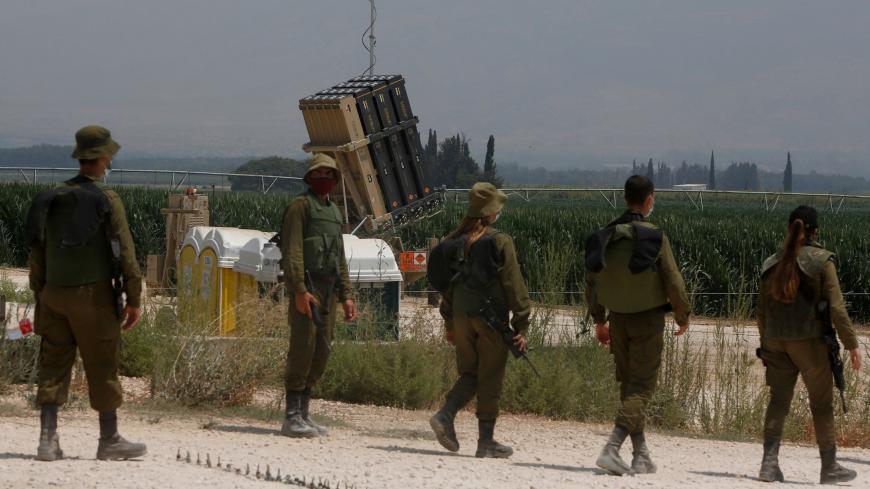 Israeli soldiers stand in front of an Iron Dome defense system battery designed to intercept and destroy incoming short-range rockets and artillery shells in the Hula Valley in northern Israel near the border with Lebanon, on July 27, 2020. - JALAA MAREY/AFP via Getty Images

Israel’s government has completed a major missile defense exercise and is open to the possibility of working with Arab Gulf states on collective missile defense in the future, a senior official said today.

Moshe Patel, head of Israel’s Missile Defense Organization, which operates under the country’s Defense Ministry, said Tuesday that no regional agreements are yet ready, but that cooperation with Israel’s Arab neighbors may be possible in the future.

“From an engineering point of view, of course there is a lot of advantage,” Patel told reporters Monday, according to Reuters. “That information can be shared, like sensors that can be deployed in both countries because we have the same enemies.”

The comments come as Israel’s Defense Ministry hailed the successful completion of a multitiered missile defense exercise that brought Israeli defense officials together with representatives of the US Missile Defense Agency.

The land and sea-based exercise tested the Iron Dome, Israel’s new David’s Sling missile and the radar systems of the Arrow anti-ballistic missile interceptor. The Iron Dome, originally designed to knock out rockets and mortars, successfully intercepted a cruise missile for the first time, the Defense Ministry said, highlighting the system’s adaptability.

“For the first time, [the test] assessed the combined interception capabilities of the multilayered air-defense system of the State of Israel,” Gantz said, according to the Jerusalem Post. “This is one of the most advanced air-defense mechanisms in the world, and it protects the state from threats near and far.”

Patel also reportedly said that proposals were being discussed about potential sales of Israeli missile defense technology to Gulf countries, but that any such deals would require US government approval if American technology is involved.

Raytheon and Israel-based Rafael Defense have worked jointly on all three of Israel’s main missile defense systems. In August the two companies announced a joint venture to build Iron Dome units in the United States.

The Trump administration is pushing regional countries to normalize ties with Israel with an eye to building a collective security structure across the Middle East that can push back on Iran. The United Arab Emirates may be the second country in the region after Israel to obtain Lockheed-Martin’s advanced F-35 Joint Strike Fighter. The Trump administration is also moving forward with plans to sell 18 armed MQ-9B drones to Abu Dhabi.

So far, the governments of Morocco and Sudan have also expressed willingness to normalize ties with Israel, according to the White House, but Saudi Arabia has held out, reportedly because of King Salman bin Abdul-Aziz Al Saud. Oman is also among the countries reportedly eyed for inclusion in the so-called Abraham Accords.

The initiative is seen as an alternative last-minute path toward the Trump administration's yet unrealized goal of bringing Gulf countries together in a cooperative regional alliance to counter Iran's influence in the Middle East.

US officials have accused Iran’s government in recent years of exploiting political vacuums left by regional conflicts in Yemen, Syria and Iraq to support local militias, though the extent of Tehran’s influence over such groups remains a matter of debate.

At the same time, Iran has continued its conventional ballistic missile and space programs, which were not forbidden by the 2015 international nuclear deal with Tehran.

The Trump administration unilaterally walked out of the nuclear deal in 2018 and clamped down on Iran’s economy with a “maximum pressure” campaign of sanctions in hope of forcing Tehran to discontinue its support for regional proxies. US officials have also accused Tehran of passing weapons technology to its proxies in the region.

Iranian President Hassan Rouhani said Monday that Iran would return to the nuclear deal if the United States does, but that Tehran’s conventional ballistic missile program is not up for negotiation.

Iran has the most extensive and advanced missile program after Israel's in the region. It is widely seen as one of the Islamic Republic’s main tools in deterring attacks on its interests, but the United States sees the arsenal as a threat to its own regional partners, including Israel and Saudi Arabia.

Tehran has proven willing to use the missiles, injuring hundreds of US soldiers in Iraq early this year in retaliation for the assassination of the IRGC’s Maj. Gen. Qasem Soleimani in Baghdad early this year. The United States also blamed Tehran for a damaging cruise missile and drone attack on Saudi Arabian oil facilities last year, a charge Iranian officials denied.

Last week, former US special envoy for Syria James Jeffrey expressed confidence to Al-Monitor that US military support for Israel’s air campaign over Syria has stopped Iran from achieving its goal of using Syria to stage advanced systems on the Mediterranean.