Israel and the United States are together developing super-technologies that enable missiles to hit other missiles out of the atmosphere. 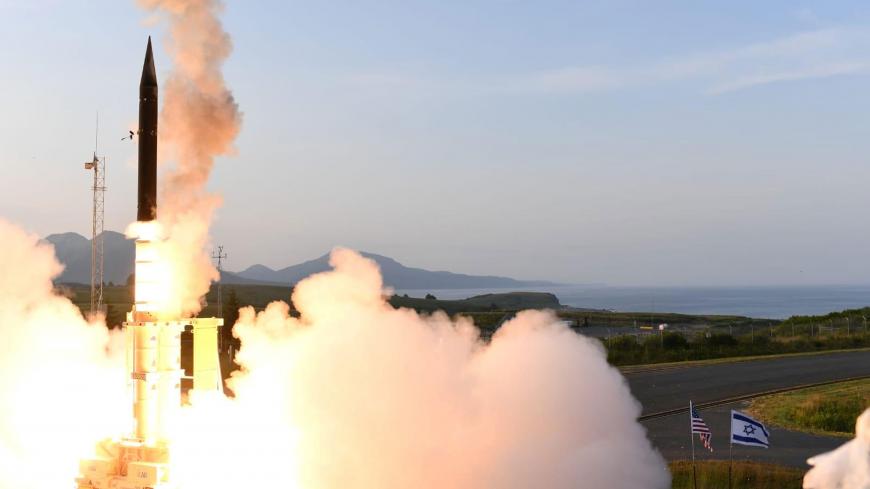 Israel's US-backed Arrow-3 ballistic missile shield is seen during a series of live interception tests over Alaska in this handout picture obtained by Reuters on July 28, 2019. - Courtesy Israel Ministry of Defense via REUTERS

An amusing coincidence last week resulted in perfect timing. Just as Israel and the United States were conducting a test series of the Israeli-American Arrow-3 missile defense system, intercepting three missiles over Alaska (completed on July 28), Iran tested on July 24 a Shahab-3 missile over a distance of nearly 1,000 kilometers (621 miles) from the south of the country toward an area east of Tehran in the north. Within a week, events in the airspace between Tehran and Alaska encapsulated the essence of the accelerated scientific-technological battle between Israel and Iran. The international battle of wits spans two decades, with the Israeli-American side currently in the lead. But the campaign is hardly over.

“We needed Alaska’s airspace to create a real test and put the system’s capabilities to a tough test,” a senior Israeli official involved in development of the Arrow-3 told Al-Monitor on condition of anonymity. “In order to launch a target missile that would simulate a ballistic missile in outer space, we needed the expanses of Alaska,” he said. Israel’s Missile Defense Organization director Moshe Patel explained that it would have been difficult to conduct such tests over the Mediterranean as Israel has in the past. “Arrow-3 intercepted target missiles three times at great altitudes, out of Earth’s atmosphere, during a 10-day period under difficult conditions. The intercepts were perfect and the hits were precise. Due to the great altitude, the missile’s warheads were ground to dust that dissipated. It was unbelievable to watch.”

Although development of the Arrow system technology began in the late 1980s, and the Arrow-3 version was conceived over a decade ago, Israel and the United States issued celebratory statements lauding the tests. Israel’s Ambassador to the US Ron Dermer flew secretly to Alaska to watch the last phase of the tests. At the same time, in an unusual move, US Ambassador to Israel David Friedman sat in on the regular Sunday weekly Cabinet meeting on July 28, at which the ministers were briefed in detail about the tests.

The party may be somewhat over the top due to the approaching Sept. 17 elections in Israel, but the technological achievement must not be underestimated. Israel and the United States now have the ability to intercept to an almost completely precise extent incoming ballistic missiles from outer space at tremendous altitudes. “These types of missiles require absolute interception,” a senior Israeli defense source tells Al-Monitor on condition of anonymity. “We cannot make do with the impressive (80%-90%) interception rates of Iron Dome (Israel’s defense system against short- and medium-range missiles). In this case, we could be dealing with a nuclear threat, unconventional warheads, and Israel cannot afford even a single nuclear rocket.”

This is the reason why the system currently nearing completion is a four-tiered defense. Arrow-3 carries out the interception in outer space. If it misses, Arrow-2 is activated to intercept the missile at high altitudes within Earth’s atmosphere. If that fails too, a lower-altitude interceptor system known as David’s Sling is activated and, as a last resort, Iron Dome is launched to head off the missile. “We sometimes know how to launch more than one interceptor toward a single missile to ensure a kill,” Patel told Al-Monitor. “We cannot reveal at what altitude the interception occurs, but it is truly at tremendous height, an inconceivable achievement. We have overcome many hurdles on the way, and we could not have achieved better results.” Uzi Rubin, considered the father of the Arrow project, told Al-Monitor that the idea for the system originated with two young engineers at Israel Aircraft Industries. “At first, I fell off the chair. I could not believe it would be possible and at a reasonable cost, but then it simply came true. This is a good day for Israel and the Jews — a bad day for Israel’s enemies.”

Not all is perfect, however, and the entire picture is far from being rosy. The Israeli system still has a way to go and is not devoid of shortcomings or weaknesses. That is why most of the effort is focused on the initial interception outside of Earth’s atmosphere. The interception takes place once the incoming ballistic missile reaches the top of its flight path and starts plunging toward its target. Even if the missile carries multiple warheads, it will be intercepted before these start to branch out, giving the interception system a significant advantage. Israel is already dealing with the challenge of confronting salvos of multiple conventional ballistic missiles carrying a half-ton to 1-ton warheads. “Iran has launched such salvos in the past,” a senior Israeli source told Al-Monitor on condition of anonymity, referring to the September 2018 missile attack on Iraq's semi-autonomous Kurdish region. He added, “It resulted in massive destruction. Such an attack would stretch our system to its limits because the damage of 1-ton warheads could be dramatic and wipe out civilian targets. This cannot be taken lightly.”

This may be the reason that even as Israel continues to develop interceptor systems, the clandestine Israel-Iran war continues and was even expanded in recent days into Iraqi territory, according to foreign media reports. Western intelligence sources and foreign media (mostly the media outlet A-Sharq al-Awsat) report that at least two airstrikes were carried out July 30 by F-35 Stealth fighters on bases of Iran’s Revolutionary Guards in Iraq. These bases, according to the same reports, contained infrastructure for Iranian ballistic missile launches. If Israel was indeed the attacker, it would be signaling that it will not accept Iranian entrenchment not only in Syria, but in Iraq too, as long as the missile launchers deployed there are directed to the west. This is a war of attrition in which both sides are displaying significant determination and do not intend to blink. Mysterious aircraft destroy weapons shipments and wipe out bases, infrastructure and missile launchers throughout Syria and now in Iraq too, while Iran continues to send these shipments and seeks alternative routes for their passage, including naval routes recently revealed. Time will tell who will give in first.