The successful testing this week of the Arrow 3 anti-ballistic-missile system is part of IDF preparations against a nuclear-threshold Iran. 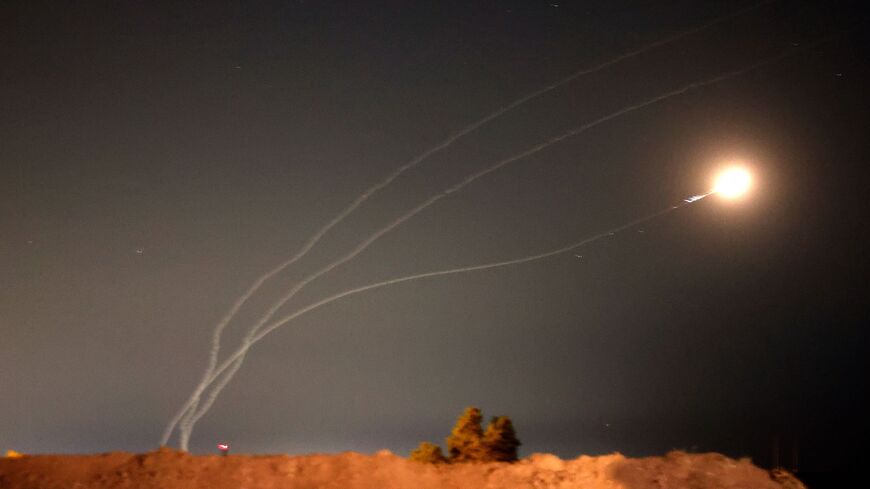 This picture taken from the southern Israeli city of Sderot shows rockets fired from the Gaza Strip being intercepted by the Israeli Iron Dome missile defense system on May 16, 2021. - JACK GUEZ/AFP via Getty Images

Israel tested its Arrow3 missile defense system this week in what was described as a breakthrough for its ability to intercept ballistic missiles outside the earth’s atmosphere. Israeli defense officials used such superlatives as “unprecedented” to describe the achievement, saying it was indicative of “Israel’s technological superiority” and underscoring the system’s innovative capabilities in confronting an array of threats, among them nonconventional ones, before they penetrate the atmosphere.

The experiment was led by the Israel Missile Defense Organization in conjunction with the US Missile Defense Agency and Israeli defense industries. According to the Defense Ministry’s official statement, the test involved detection of an incoming target by the Arrow’s radar, relay of the data to the system’s Shooting Management Center, analysis of the information and preparation of an interception plan, and the launch of two Arrow3 interceptors, each with a different mission, which destroyed the target.

The test was part of a long-term development plan of anti-missile defenses unconnected to the latest developments in the erratic negotiations between the United States and Iran on its nuclear program, but the Arrow3 and similar systems clearly provide Israel with an insurance policy regarding Iran’s nuclear ambitions. Should all diplomatic efforts to block Iran’s ambitions fail, and if Israel does not attack Iran’s nuclear facilities despite threatening to do so, the Arrow system will at least enable Israel to defend itself against Iranian ballistic missiles carrying nuclear warheads.

While nuclear weapons use is an avenue of last resort, some in Israel believe such a scenario could be conceivable under certain circumstances and that Israel must therefore be prepared. Israel is not hopeful that the negotiations will result in an agreement slowing Iran’s race to nuclear breakout capabilities.

The United States has been signaling that only a few weeks are left to reach an agreement, threatening that if the talks appear to be dragging on futilely, it will examine other options. But Washington has not defined what these options are, and at least for now appears unwilling to use them. Israel’s latest assessment is that ahead of their renewed talks in Vienna, the sides will agree on a formula they will present as progress, but it will in fact allow more foot-dragging without tangible results.

On a positive note, Israeli intelligence suggests Iran has slowed its uranium enrichment over the past month or two to avoid angering the Americans after accelerating production in the preceding months and amassing sufficient military grade fissile material to assemble one bomb within weeks. The relative status quo serves both sides, with neither wanting to be accused of torpedoing the negotiations and thwarting prospects of an agreement.

This lack of tangible progress is not good news for Israel, but Israeli officials believe the United States will not allow the talks to drag out much longer and will seek to present concrete progress in the coming months ahead of the November midterm elections expected to be extremely challenging for the Democrats.

According to some reports, Israel is hoping that the administration’s desire to remove the Iran nuclear issue from its foreign policy agenda will prompt renewed pressure on Tehran, whether in the form of new sanctions or a credible military threat, although the “maximum pressure” policy implemented by the Trump administration failed to halt Iran’s nuclear race.

Israel’s position was presented in detail to US national security advisor Jake Sullivan in his late December visit to Israel. Defense Minister Benny Gantz repeatedly laid out Israel’s concerns over Iran’s nuclear plans and expressed to Sullivan his fear of what he described as a greatly flawed deal. According to Israeli sources, Sullivan tried to ease Israel’s concerns, promised that the United States would not let Iran develop nuclear weapons and stressed that if the United States had wanted to sign a bad deal with Iran, it would have done so long ago.

Even as it keeps up its diplomatic efforts with the United States and others in the international arena to thwart Iran’s nuclear program, Israel’s military continues preparations for a possible operation against Iran. It is no secret that Israel had neglected updating and upgrading its military planning in this regard in recent years and therefore, despite its adamant rejection of any agreement, many in Israel’s top political and security echelons would rather see a bad agreement with Iran than no agreement at all in order to buy additional time to prepare for a military strike.

Today, Jan. 22, Israel announced that it had signed an agreement with the German ship builder Thyssenkrupp for three advanced submarines for its navy. While Israel’s naval craft acquisitions from Thyssenkrupp have been overshadowed in recent years by scandal involving suspicions of corruption, the purchase of the new subs would be a significant addition to Israel’s offensive capabilities. According to foreign news reports, these vessels would bolster Israel’s second-strike capabilities in case of a nuclear attack.

In addition to the submarine acquisitions, Israel has in recent months also bought two refueling aircraft from the United States and is trying to move up their supply date as well as an additional F-35 stealth jet squadron and 12 state-of-the-art attack helicopters. It also decided to double the number of Iron Dome missile interceptors in its arsenals. However, it will take months or years until all the items on Israel’s shopping list are delivered, and that is why Israel is trying to do all in its power to buy time allowing it to prepare for a clash with Iran.