Associates of Prime Minister Naftali Bennett emphasize that his traveling to Moscow and Berlin and his contacts with all the parties were conducted with the US administration in the picture and with its blessing. 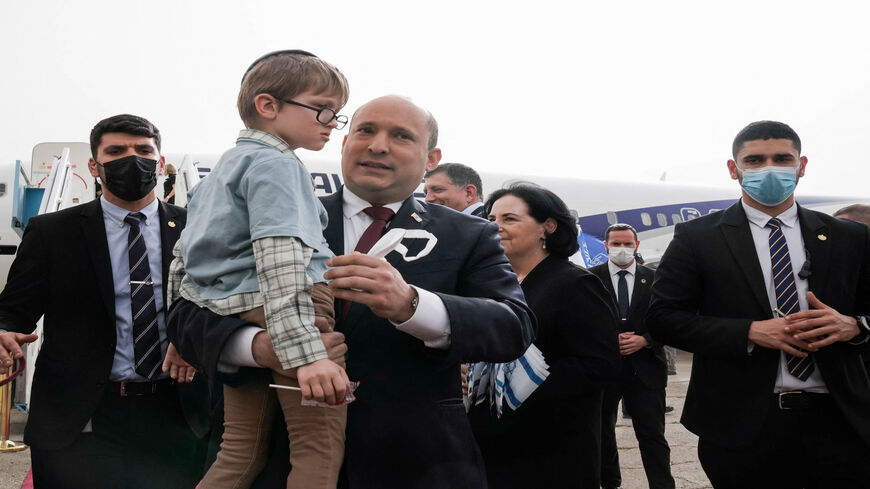 Israeli Prime Minister Naftali Bennett welcomes a group of orphans from the Alumim orphanage in the Ukrainian city of Zhytomyr, on arrival at Ben Gurion Airport, Israel, March 6, 2022. - Maya Alleruzzo/POOL/AFP via Getty Images

German Chancellor Olaf Scholz was the real instigator of the Ukraine-Russia mediation effort undertaken by Prime Minister Naftali Bennett last week, according to sources close to the prime minister. “It all started with a long one-on-one meeting between the chancellor and the prime minister,” a senior diplomatic source in Jerusalem told Al-Monitor on condition of anonymity. “Scholz complained to Bennett that although Europe was experiencing one of the toughest wars in decades, and despite the explosive potential of a speedy deterioration, there are no mediators who will try to understand both sides and meet them to map out their differences and try to lower the flames.”

The newly installed chancellor made a lightning visit to Israel March 3 and his chemistry with Bennett was immediately obvious. Their meeting resulted in the mediation idea, according to the prime minister’s aides. After analyzing the situation between Russia and Ukraine, both men concluded that of all the leaders in the world, Bennett had the required equal access to both sides as well as to both opposing camps. Bennett has been building up his credibility with Russian President Vladimir Putin since taking office last year. Israel also enjoys a special relationship with Ukraine’s Jewish President Volodymyr Zelenskyy. What's more, Israel is a close US ally and also enjoys warm ties with Europe, making Bennett the apparent perfect mediator on all fronts.

Following his meeting with Scholz, Bennett convened a speedy consultation with his closest aides, including his highly regarded national security adviser Eyal Hulata, a former senior Mossad official and his influential foreign policy adviser Shimrit Meir. The team decided to try to “do something.” They agreed that if Bennett’s efforts would not help, they would not hurt, either. Such an endeavor, according to his aides’ assessment, would not expose Bennett to serious risks. On the contrary, a mediation initiative would position him as a leader of international stature and justify Israel’s efforts to avoid alienating Putin by adopting a low-key presence within the Western democratic camp openly allied with Ukraine.

Not everyone on the prime minister’s staff was keen on the idea. His veteran right-wing associates, who have stuck with him throughout the vicissitudes of his political career, believe Bennett’s high-profile involvement in the European conflict is unnecessary and risky. For now, his professional diplomacy and security aides like Hulata and Meir have the upper hand and have proven justified, so far, by the overall positive balance of Bennett’s mission. Everyone is talking about him. The media tracking operation in the prime minister’s office reported March 9 that some 14,000 news reports about Bennett’s diplomacy had been logged around the world. Not bad for a complete unknown stepping into the international arena where his predecessor, former Prime Minister Benjamin Netanyahu enjoyed global recognition.

“It is all down to our policy,” a source close to Bennett told Al-Monitor on condition of anonymity. “We defined a ‘measured’ policy regarding the war in Europe because of our special circumstances vis-a-vis the warring sides.” Asked about the meaning of a “measured” policy, the source responded, “We are in the Western camp. That is clear to everyone. Israel condemned the Russian invasion of Ukraine at the United Nations. But we also have security interests stemming from the significant Russian presence on our northern front [in Syria], and national interests dictated by the fact that hundreds of thousands of Jews live in the combat zone as well as in Russia and Belarus. That is why we have to conduct ourselves responsibly and take measured steps.”

Did Bennett present Putin and Zelenskyy with a concrete mediation offer of any kind? According to the official version, absolutely not. But Israeli and international sources privy to Bennett’s talks with the two leaders portray the Israeli leader as one of the most knowledgeable actors about the conflict. “He is now familiar with the name of every village in [the east Ukrainian separatist region of] Donbas and every tiny detail of Russia’s list of demands,” one of Bennett’s aides told Al-Monitor on condition of anonymity. Asked what Israel gets out of this, the source replied, “For now, not much. Bennett should be regarded as a tool. He has full and quick access to all sides, who also believe him. We can expect many tough moments down the line. It is important to have such a tool in the international toolkit.”

According to the prime minister’s associates, Bennett’s travels and conversations are all coordinated with the relevant parties, including the United States, which have given their blessings. Bennett reported on his impressions of Putin to many Western leaders in great detail, including the Russian president’s red lines and the few options for getting him off his destructive high horse. Some in Bennett’s office claim that as of March 10, both Putin and Zelenskyy have demonstrated a small measure of flexibility compared with their opening positions. “The Russians are no longer demanding Ukraine’s demilitarization, but are talking mostly about the Donbas region,” another senior Israeli diplomatic source said, speaking on condition of anonymity. “They are also not talking at the moment about getting rid of Zelenskyy. The Ukrainian president, for his part, has stated that he is no longer keen on joining NATO.” Will that suffice? As things stand on March 11, probably not.

Meanwhile, Bennett is enjoying the fruit of his labors despite his domestic political travails. After his return from Moscow and Berlin March 6, President Isaac Herzog made a historic visit to Ankara, where Turkish President Recep Tayyip Erdogan laid on a welcome fit for kings. The Chief-of-Staff of the Israel Defense Forces, Lt. Gen. Aviv Kochavi, visited Bahrain March 9-10 for meetings with his counterpart. Alternate Prime Minister and Foreign Minister Yair Lapid “popped over” March 7 to Riga, Latvia, to meet with US Secretary of State Antony Blinken and to Amman, Jordan, March 10 to meet with King Abdullah.

The meetings in Manama and Amman would have been unimaginable just two years ago. The Middle East is undergoing dizzying change and all the actors in this volatile arena are preparing for what they view as a far greater strategic threat than the war in Europe — the imminent signing of the world powers’ agreement with Iran on the future of its nuclear program.