Prime Minister Naftali Bennett's delegation found Russian President Vladimir Putin focused and determined, and neither delusional nor out of control. 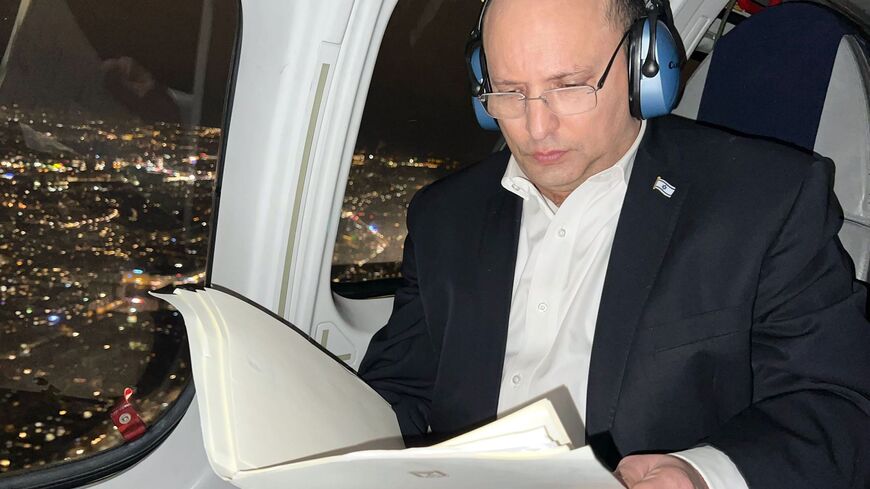 Prime Minister Naftali Bennett reads on his way from Moscow to Berlin, March 5, 2022. - Office of the Israeli Prime Ministry

Just over 24 hours after the dramatic Moscow meeting between Israeli Prime Minister Naftali Bennett and Russian President Vladimir Putin, a weapons depot was bombed south of Damascus. The strike, attributed to the Israeli air force, was the first of its kind since Russia invaded Ukraine two weeks ago. It is unclear whether the raid in the pre-dawn hours of March 7 was directly linked to the March 5 Moscow meeting, but events in this region tend to be intertwined. As of now, Israel's mediation moves, with Bennett a would-be Henry Kissinger, have not yielded tangible results, but they have placed Israel’s relatively inexperienced and politically challenged prime minister in the big leagues.

The trip to Moscow was a clandestine operation. Joining Bennett was Construction and Housing Minister Zeev Elkin, who served as an interpreter, just as he did for former Prime Minister Benjamin Netanyahu at all his meetings with Putin since 2009. Ukraine-born Elkin was a Soviet dissident on the KGB’s radar who moved to Israel with the union's collapse. Elkin is one of Israel and the West's politicians most familiar with Putin after logging many hours, both formal and informal, with him and studying him up close.

One can assume that Western intelligence agencies have obtained the small Israeli delegation’s impressions of Putin following their return to Israel. Immediately upon Bennett’s return, Foreign Minister Yair Lapid made an unscheduled trip to Riga, Latvia, to meet with US Secretary of State Antony Blinken. Lapid is believed to have shared detailed information and impressions from the Moscow visit. “Given the state of global crisis, a war that could turn into a world war and nuclear arsenals placed on alert, receiving firsthand information and direct impressions from people who have met with relevant leaders is of paramount importance,” a former Israeli intelligence official told Al-Monitor on condition of anonymity.

Such an assessment, if delivered, is unlikely to have been optimistic. Putin is thought to be focused and determined and contrary to some speculation, is not delusional or out of control.

“The Russians are entangled in Ukraine, that is already clear," A senior Israeli diplomatic source told Al-Monitor on condition of anonymity. "As of now, we share French President Emmanuel Macron’s impression that the worst is yet to come. Putin’s terms are draconian and he shows no inclination to compromise or any signs of regret or weakness.”

Bennett and Elkin flew to Moscow on a private plane on Saturday morning. Both observant Jews, they violated the travel ban on the Jewish Sabbath that makes few exceptions other than the goal of saving lives. Elkin even drove himself to the airport, multiplying his violation of the Sabbath, surely to avoid any leaks. The meeting was eventually announced by the Kremlin two hours after it began. It lasted some three hours, after which the Israeli delegation returned to its plane and Bennett called Ukraine President Volodymyr Zelenskyy and Macron to update them before taking off for Berlin. Over dinner, Bennett discussed his Kremlin meeting with German Chancellor Olaf Scholz, whom he met just last week when the German leader made a lightning visit to Israel. On Sunday, Bennett spoke again with Zelenskyy and Macron.

Are these diplomatic endeavors harbingers of world peace?  No. Will they bring about a cease-fire or open up effective humanitarian corridors? Probably not. The Russians declared on Monday that they were enabling civilians to leave, but the announcement quickly proved misleading. What, then, did the Bennett-Putin meeting achieve? Perhaps an understanding of sorts. In case of deterioration, Putin and Zelenskyy may find it easy to use Bennett as a go-between. Bennett said Sunday, “There’s a terrible human tragedy … As long as the candle is burning, we need to make every effort.” And indeed he did.

According to reports from the West, the current situation is as follows: The negotiations between Russia and Ukraine in Belarus are real and serious. On the table is a new proposal from the Russians aimed at ending the fighting, awaiting a response by Zelenskyy. The proposal's conditions are reportedly very difficult for Ukraine, but not impossible.

The sides' positions aren't that far apart, say the reports, but Putin does not intend to compromise. Sources say the decision facing Zelenskyy is tough: if he responds positively, he will risk harsh criticism from home, but he could probably ensure Ukraine's independence. If he refuses the offer, Putin could order his forces to resume their advancement and activate the full force of the Russian army.

Zelenskyy could lose everything — Ukraine's sovereignty and possibly his life as well. Bennett's goal in his visit to Putin was not to present a specific mediation proposal, but rather to serve as an observer for Western countries of Putin's mindset and present him with some ideas. Zelenskyy spoke with Bennet over the phone again this afternoon, thanking Israel for its mediation efforts and work to further the negotiation process.

The fighting in Europe has diverse implications for Israel. The refugees are pouring in, with some Ukrainian Jews arriving to take up permanent residence in Israel as immigrants. Ukrainian officials are speaking more harshly about Israel, expressing anger at its refusal to supply them with military equipment. At a March 7 press conference, Ukraine’s Ambassador to Israel Yevgen Korniychuk wore a helmet and asked, “"Please, tell me how you can kill with this thing.”

The Ukrainians need helmets and bulletproof vests, which they insist they will give to civilians and not security forces. Defense Minister Benny Gantz has refused to dispatch any equipment to Ukraine stamped with the acronym of the Israel Defense Forces (IDF). On March 7, Gantz discreetly asked officials to examine whether Israel could supply the Ukrainians the equipment they want from directly from the warehouses before the IDF logo is stamped on the items. “Just like our field hospital operating in Ukraine, which is completely civilian, we will make every effort to supply them with this equipment — just as long as it is not IDF equipment,” a senior Israeli security official told Al-Monitor on condition of anonymity.

Bennett’s diplomatic efforts do not appear to have caused any damage so far. While they have not yielded tangible progress, they have also not provoked any explicit opposition. The Americans are silent, the Europeans have welcomed the moves and Zelenskyy listened attentively. The prime minister’s aides insist he updated the Americans fully before setting out for Moscow and was given their blessing. Israel continues to maintain neutrality with great skill, although it knows this position is not tenable in the long term. As more scenes of despair and destruction from Ukraine emerge, Israel will be forced to pick a side. And the state of the Jewish people persecuted and expelled for centuries will never choose Goliath.