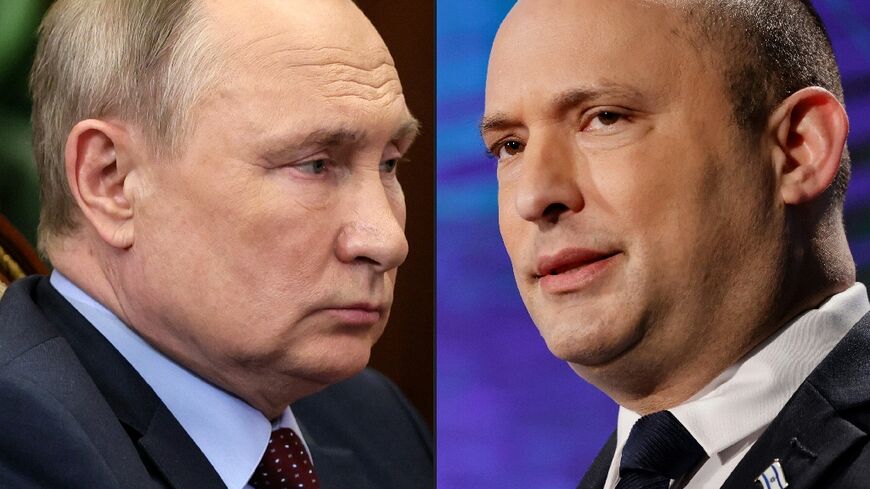 Israel's premier stepped into the role of mediator Saturday as Russia's invasion of Ukraine intensified, holding a three-hour meeting at the Kremlin with Vladimir Putin before calling Ukraine's president and flying to Berlin.

Prime Minister Naftali Bennett's sit-down with Putin was the first by a foreign leader since the day Russian forces invaded Ukraine last week, and came after Kyiv had asked Israel to launch a dialogue with Moscow.

Bennett has so far walked a cautious line on the Ukraine conflict, seeking to preserve delicate security cooperation with Russia, which has a large military presence in Israel's northern neighbour, Syria.

Bennett has not joined Western leaders -- notably key ally the United States -- in forcefully condemning the invasion, instead stressing Israel's strong relations with both Russia and Ukraine.

After his meeting with Chancellor Olaf Scholz, the two agreed their aim was to "end the war in Ukraine as soon as possible", the German's spokesman said in a statement early on Sunday.

At the end of a whirlwind diplomatic tour, Bennett spoke twice with the Ukrainian President Volodymyr Zelensky and once with the French President Emmanuel Macron, the prime minister's office said in a statement.

Ahead of the trip, Bennett had spoken by telephone repeatedly with both Putin and Zelensky -- who is Jewish, has family in Israel and has visited the country many times.

"Bennett's action is bold but also risky. Much will depend on Putin's state of mind," Michael Oren, former Israeli ambassador to Washington, told AFP.

Oren noted that while Putin rebuffed heavyweight diplomatic outreaches before the invasion, "Russia is in a different position today and Putin may be looking for a way out of his predicament. Naftali Bennet just may supply the ladder."

Bennett's office said he left Israel for Moscow early Saturday, itself an extraordinary move for a religious Jew who does not conduct state business on the Jewish sabbath, except in extraordinary circumstances.

Bennett and Putin met for three hours, in a visit that was coordinated with the US, Germany and France, an Israeli official said.

Bennett's delegation included housing minister Zeev Elkin, a fluent Russian speaker who was born in Ukraine when it was part of the Soviet Union.

The Kremlin said "different aspects of the situation in Ukraine" were discussed at the meeting.

The premier's "insistence on attempting the almost impossible -- trying to maintain not neutral but warm relations with both sides in a war -- is threatening to exasperate the US and has the potential to deeply harm Israel's standing in the free world," Horovitz said Saturday.

The Bennett-Putin talks also "touched upon the progress of the (Iran) nuclear talks in Vienna," the Israeli official said.

Iran and the International Atomic Energy Agency said earlier Saturday after talks in Tehran that they agreed on an approach to resolve issues crucial in efforts to revive the country's 2015 nuclear deal.

Bennett is a staunch opponent of global efforts to revive the agreement which gave Iran relief from sanctions in exchange for curbs on its nuclear programme.

The premier has argued that Tehran will use the revenue boost from the lifting of sanctions to buy weapons that can harm Israel, while still pursuing a nuclear weapons capability, an ambition Iran denies.

Russia, which has itself been slapped with Western sanctions over its invasion of Ukraine, said Saturday that it would seek guarantees from Washington before backing any revived agreement, complicating efforts for a rapid deal.

Foreign Minister Sergei Lavrov said Russia had requested that the US give it written guarantees that Ukraine-related sanctions "will not in any way harm our rights to free, fully-fledged trade and economic and investment cooperation, military-technical cooperation with Iran".

There was no immediate comment on any link between the new Russian position and Bennett's visit.