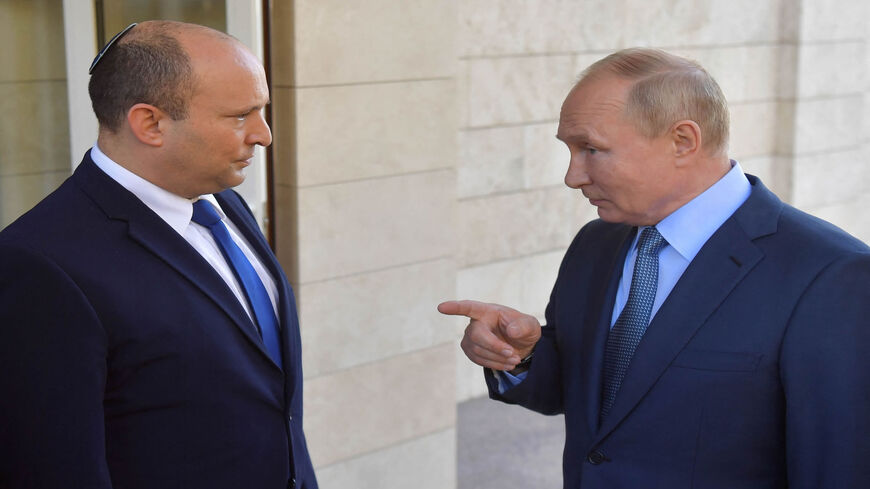 Prime Minister Naftali Bennett flew March 5 to Moscow to meet with Russian President Vladimir Putin, as the first Western leader to sit down with the Russian leader since the Feb. 24 invasion of Ukraine. Bennett was accompanied by Ukrainian-born Housing Minister Zeev Elkin, who had accompanied former Prime Minister Benjamin Netanyahu on several trips to Moscow as an interpreter in talks with Putin.

Before departing to Moscow, Bennett spoke on the phone with French President Emmanuel Macron, who reportedly briefed him on his own conversations with Putin. An unnamed French official was quoted as saying, "They will stay in touch with the aim of obtaining a ceasefire, and this in coordination with German Chancellor Olaf Scholz."

No details were officially provided by the sides over the three-hour long encounter. Still, reports after the Bennett-Putin meeting said the two leaders discussed not only the Ukrainian crisis, but also the ongoing talks in Vienna between world powers, including Russia, and Iran about reviving a 2015 nuclear deal. Syrian media linked today the aerial attack earlier this morning near Damascus, which it attributes to Israel, to Bennett’s talks with Putin and with reports that these talks included also the issue of Israel’s maneuvering margins in Syrian skies.

Bennett then continued to Berlin, where he met with Scholz. The two leaders met over dinner for an hour and a half late Saturday night, during which they reportedly discussed the war in Ukraine and Bennett’s meeting with Putin.

On March 6, Bennett and Putin spoke again, on the phone this time. "A thorough exchange of views was continued on the situation in connection with Russia's special military operation to protect Donbas, including taking into account Naftali Bennett's most recent contacts with the leaders of a number of states," said the Kremlin in a statement. Apparently, Bennett spoke again with Macron, after the phone call with Putin.

Throughout the weekend, Bennett spoke on the phone at least three times with Ukrainian President Volodymyr Zelenskyy. "We continue to dialogue," the Ukrainian leader tweeted after his talks with Bennett.

Bennett tweeted after his trip, "I went there in order to assist the dialogue between the parties, of course with the blessing and encouragement of all the players. As we all know, the situation on the ground is not good. The human suffering is great and may become much greater if things continue on the current trajectory."

Addressing his ministers March 6, during the Cabinet’s weekly meeting, Bennett said that Israel had a moral obligation to broker peace talks between Russia and Ukraine, even if the likelihood for progress was slim. “I returned from Moscow and Berlin a few hours ago. I went there to assist the dialogue between all of the sides,” he noted, adding he could not go into greater detail on the talks he held with Putin or on his phone calls with Zelenskyy.

Foreign Minister Yair Lapid is set to meet briefly this afternoon with US Secretary of State Antony Blinken in Latvia’s capital of Riga, his office said.

Ynet’s Nadav Eyal wrote this morning that according to European sources, Bennett’s current shuttle diplomacy was born following the visit of Scholz to Israel March 2. Scholz, it is said, has a lot to lose on directly contacting Putin, which is why he could consider Bennett as moderator between the West and the Kremlin. Eyal also noted that the Israeli delegation found an especially combative Putin, signaling that he has no intention to compromise.