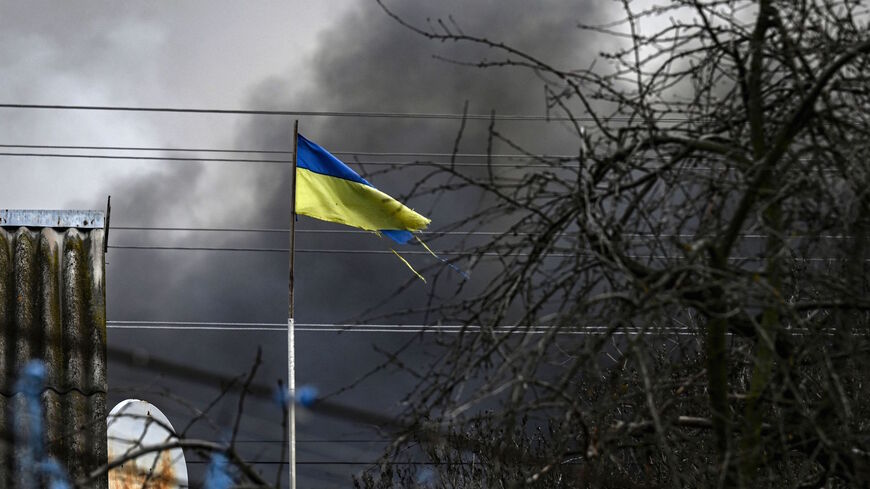 An Ukrainian flag waves in front of smoke rising from a bombed warehouse in the town of Stoyanka, west of Kyiv, on March 4, 2022. - ARIS MESSINIS/AFP via Getty Images

The Biden administration has so far not given much visible priority to negotiations with Russia to end the Ukraine war, leaving the diplomatic lane open for other players.

Most prominent among the interlocutors have been French President Emmanuel Macron and German Chancellor Olaf Scholz, who are also mediators for the Minsk Agreements established in 2014 between Moscow and Kyiv that aim to end hostilities over the Donbas region of Ukraine.

Russian President Vladimir Putin, however, has been cool to the European mediation efforts, because Macron and Scholz have joined the US-led sanctions regime against Russia, and therefore, in Putin’s view, possess limited credibility as impartial brokers, as Dimitri Simes explains in this week’s On the Middle East podcast.

Also stepping into the breach are Israeli President Naftali Bennett and Turkish President Recep Tayyip Erdogan, who have also seized the opportunity to take on an outsized diplomatic role in the crisis.

Scholz has Bennett’s back in diplomatic bid

Ben Caspit breaks the story this week that Scholz was the “real instigator” of the Bennett mediation effort last week, which included meeting with Putin in Moscow, followed up by calls with Ukrainian President Volodymyr Zelenskyy.

Scholz and Bennett had concluded, according to Caspit, “that of all the leaders in the world, Bennett had the required equal access to both sides as well as to both opposing camps,” enjoying good relations with the United States, Russia and Ukraine.

While Israel is in the “Western camp,” as a senior Israeli official close to Bennett told Caspit, and has condemned the Russian invasion of Ukraine, it also has vital security interests with Russia because of Moscow’s role in Syria and because “hundreds of thousands of Jews live in the combat zone” as well as in Russia and Belarus.

While the Biden administration has reportedly “blessed” Bennett’s mediation, it can only go so far unless the United States gets fully behind it.

So far, Ukrainian-Russian meetings to agree even on limited measures such as humanitarian evacuation corridors have been elusive and a cease-fire a nonstarter.

The Bennett effort may have a pulse, however, as the general assessment is that the destruction and killing in Ukraine are only going to get worse.

David Ignatius reports that Bennett is willing to host Putin and Zelenskyy in Jerusalem.

The pieces of diplomatic settlement may be coming together, if still hazy. Putin is now focused on a neutral rather than disarmed Ukraine, perhaps even with Zelenskyy in power, if the Ukrainian president would recognize the annexation of Crimea, the independence of Donetsk and Luhansk, and give up claims to NATO membership. On the latter, Zelenskyy said recently he had “cooled down” regarding NATO.

In addition, Putin will of course want some walk-back on international sanctions, something Zelenskyy can’t deliver. Sanctions relief on Russia depends on the United States.

For Bennett, the moment could be fleeting if he doesn’t feel that Washington gets behind him. Alone, and even with German support, he can only take this so far. While his foray into global diplomacy is groundbreaking, it has yet to give him much of a political bounce in Israel, as Mazal Mualem reports.

Erdogan has also sought to seize diplomatic opportunity in the Ukraine crisis.

His foreign minister, Mevlut Cavusoglu, hosted a meeting between his Ukrainian and Russian counterparts, Dmytro Kuleba and Sergey Lavrov, in the southern town of Antalya on March 10.

That the meeting seemingly made no progress on easing the humanitarian crisis in Ukraine, as Nazlan Ertan reports, the Turkish effort is notable, and probably just a start.

Erdogan is playing a tough diplomatic hand about as well as it can be played. Although Turkey is a NATO member, public opinion on the alliance is low, as Pinar Tremblay reports. Erdogan has cultivated a solid working relationship with Putin, despite differences over Syria and, especially now, Turkey’s provision of armed drones to Ukraine.

Turkey is especially hard hit by the economic disruptions of the war, including the spike in gasoline prices, which comes on top of an already deep, ongoing economic crisis in Turkey, as Mustafa Sonmez reports.

Meanwhile, Turkey is considering options for it to be an alternative bridge for Europe to receive supplies of natural gas, as Muhdan Saglam reports.

There are also reports, as Fehim Tastekin notes, that Turkish-backed armed groups in Syria, including various Islamist factions, could launch a new offensive against Syria, seeking to take advantage of Russia’s preoccupation with Ukraine.

“Erdogan’s dual approach also includes aspects aiming at pleasing Moscow,” Tastekin explains. “Stopping short of joining Western sanctions against Russia, Turkey has been keeping its airspace open to Russia. Ankara’s underscoring of the economic ties between Turkey and Russia indicate that the Turkish government has been encouraging Russia to see Turkish-Russia bilateral ties as an opportunity amid Western sanctions.”

Qatar steps up in US-Iran diplomacy

Qatar has been playing a critical role as a diplomatic complement to the Vienna negotiations on the Joint Comprehensive Plan of Action (JCPOA), or Iran nuclear deal, and in helping facilitate direct US-Iran talks, as we scooped here last month.

With the Vienna negotiations now paused, the role of Qatar as a trusted diplomatic broker is likely to increase.

The Financial Times reported this week that the US-Qatar partnership has surged this past year, as Doha played a critical role in assisting the United States in Afghanistan, including in negotiations with the Taliban, and US President Joe Biden hosted Sheikh Tamim bin Hamad Al Thani at the White House in January when Biden announced Qatar being designated as a major non-NATO ally.

The largest US naval base in the region is in Qatar.