Russia's invasion of Ukraine is having an impact well beyond Europe. Follow along for the latest updates affecting the Mideast region. 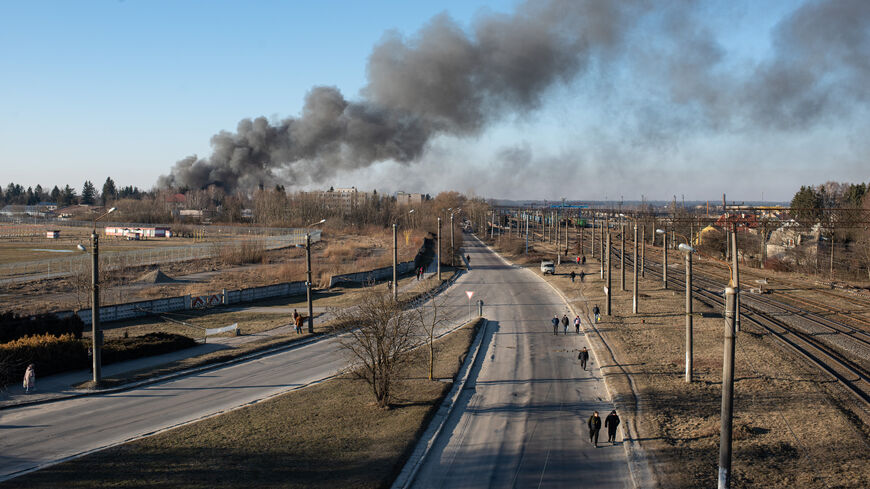 Smoke is seen above buildings close to the airport on March 18, 2022 in Lviv, Ukraine. - Getty Images

Here’s what we’ve seen so far:

More from Al-Monitor: Follow our coverage here and check out this week's Middle East Minute video for a roundup of regional reactions to the conflict.

7:30 a.m., Mar. 15: Jordan: Israeli-Palestinian peace plans should not be affected by Ukraine

In our call, FM @yairlapid assured me Israel won’t be the route for Russia to bypass sanctions. Grateful for Israel’s mediation efforts and humanitarian aid. We discussed ways of ending the war in Ukraine. Agreed that the rights of Ukrainians arriving in Israel will be respected.

Spoke with Iranian FM Hossein Amirabdollahian ahead of his visit to Moscow tomorrow. Iran is against the war in Ukraine, supports a peaceful solution. I asked to convey my message in Moscow: Russia must stop bombing civilians, commit to the ceasefire, and withdraw from Ukraine.

Mar. 12: Russians are trying to liquidate their assets through cryptocurrencies

People continue to flee the war in #Ukraine. As of today:

❗ 2.5 million people have fled to neighboring countries, including 116,000 third-country nationals.

The number of people in need of urgent humanitarian assistance is increasing by the hour. pic.twitter.com/xrNEzZoe7n

Update: Turkey's Foreign Minister said later on Friday that its diplomatic staff would relocate to Chernivsti in western Ukraine.

Constructive and important meeting with @mfa_russia's Sergei Lavrov in Antalya, #Turkey this afternoon. We are making progress on the safety and security of nuclear facilities in #Ukraine. pic.twitter.com/baT9BlSpyD

1:51 p.m., Mar. 9: Lavrov arrives in Turkey ahead of meeting tomorrow with Ukraine FM

Mar. 9: Top Ukrainian diplomat says he has ‘limited expectations’ for talks with Lavrov

Mar. 7: Egyptian official: four and a half months of wheat reserves available

Upon President @RTErdogan’s initiatives & our intensive diplomatic efforts, Foreign Ministers Sergei Lavrov of #Russia & Dmytro Kuleba of #Ukraine have decided to meet with my participation on the margins of @AntalyaDF.

Hope this step will lead to peace and stability.

Talked to @elonmusk. I’m grateful to him for supporting Ukraine with words and deeds. Next week we will receive another batch of Starlink systems for destroyed cities. Discussed possible space projects 🚀. But I’ll talk about this after the war.

4:30 a.m., Mar. 6: Number-two US diplomat praises Turkey over its support to Ukraine

Mar. 5: Turkey, US to continue coordination; Erdogan set to speak with Putin tomorrow

Russia's flagship airline Aeroflot announced it is suspending all of its international flights starting March 8 in the wake of Western sanctions. Domestic flights, as well as flights to Belarus, are set to continue. pic.twitter.com/BHMFqrl3tz

Held regular talks with President @RTErdogan. Grateful to 🇹🇷 for the consistent support. Informed about the ongoing aggression and nuclear terrorism on the part of the Russian Federation. We must achieve an end to hostilities. #StopRussia

Start talking to Russian representatives. The key issues on the agenda:
1. Immediate ceasefire
2. Armistice
3. Humanitarian corridors for the evacuation of civilians from destroyed or constantly shelled villages/cities. pic.twitter.com/Pv0ISNjsod

Had a phone conversation with 🇮🇱 Prime Minister @naftalibennett about Russian aggression.

Mar. 2: DHL announced the suspension of its service to Russia, Belarus

Mar. 2: Israel's Bennett says the situation in Ukraine “can get much worse”

Mar. 1: Ukraine's Zelenskyy gets standing ovation in European Parliament as he vows to fight for freedom

"Nobody will break us, because we are Ukrainians"

The @Europarl_EN #EPlenary meets at 12:30 to discuss Russian invasion of #Ukraine.

President @ZelenskyyUa & Speaker @r_stefanchuk will join & speak to the world.

In our call, @SecBlinken affirmed that the U.S. support for Ukraine remains unfaltering. I underscored that Ukraine craves for peace, but as long as we are under Russia’s assault we need more sanctions and weapons. Secretary assured me of both. We coordinated further steps.

1:52 p.m., Feb. 28: Top US diplomat thanks Turkey for 'continued implementation' of Montreux Convention

There's been a lot of loose talk from smart people about "close air support" and "no fly zones" for Ukraine.

Let's just be clear what that is - the U.S. and Russia at war. It's a bad idea and Congress would never authorize it.

More than 500,000 refugees have now fled from Ukraine into neighbouring countries.

Feb. 28: The Ukrainian delegation arrives at area where talks with Russia will be held

Feb. 27: Israel's Bennett proposes to mediate over Ukraine in call with Russia's Putin

Feb. 27: Egypt's Al-Azhar calls for dialogue between Russia and Ukraine

On the fourth day of the Ukraine war, we repeat President Erdoğan’s call for an immediate halt of Russian attacks and the start of ceasefire negotiations.

We will continue our efforts to help the people of Ukraine and end bloodshed in this unjust and unlawful war.

Ukraine: Numbers are constantly being updated but the latest count of refugee arrivals in neighbouring countries now exceeds 200,000. We aim to have another update later today.

Feb. 27: Ukraine points to Turkey as venue for negotiations to end conflict with Russia

While the world is focused on the tragedy unfolding in #Ukraine, my friend Nikos 🇬🇷 is focused on his sole hobby: Defamation of Türkiye in any condition.

Such dedication and so much effort put on such nonsense. So sad! https://t.co/yqy5C3AmWh

Feb. 26: Lebanon to evacuate its citizens in Ukraine

I thank my friend Mr. President of 🇹🇷 @RTErdogan and the people of 🇹🇷 for their strong support. The ban on the passage of 🇷🇺 warships to the Black Sea and significant military and humanitarian support for 🇺🇦 are extremely important today. The people of 🇺🇦 will never forget that!

Feb. 26: UAE calls for end of hostilities between Russia and Ukraine after fence sitting at UN

6:44 a.m., Feb. 26: Israel urges its citizens fleeing Ukraine to identify themselves with signs

Feb. 26: Third commercial vessel struck in the Black Sea as conflict escalates between Russia and Ukraine