Moscow is likely to welcome a Turkish mediation effort if it serves to restrain Ukraine from a military adventure. 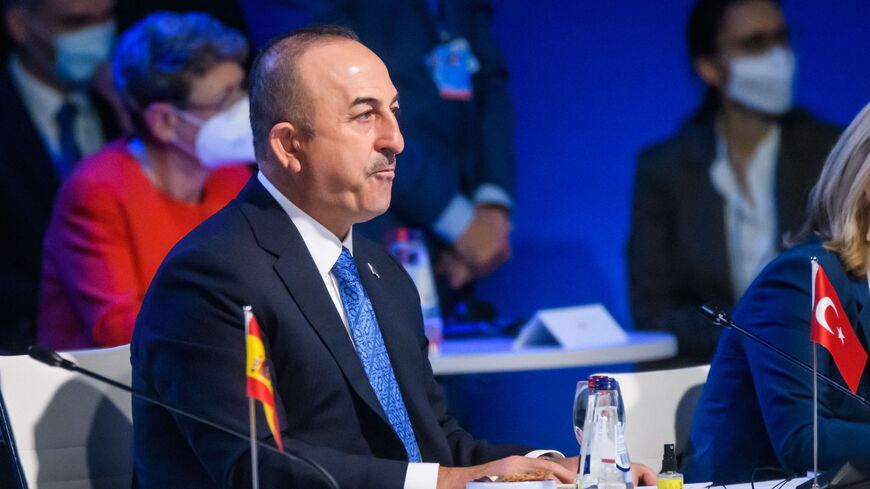 Turkey has offered to mediate in the Ukraine crisis as tensions between NATO and Russia escalate, with fears that Russia might be gearing up to invade eastern Ukraine. The proposal from President Recep Tayyip Erdogan, who has previously passed messages between the Russian and Ukrainian leaders, seems to have generated little enthusiasm in Moscow and Kyiv.

Turkey has followed an inconsistent policy in the NATO-Russia row fueled by the Ukraine crisis. On one hand, it has irked Moscow by supplying Bayraktar TB2 armed drones to Kyiv and rejecting Russia’s annexation of Crimea. Also, it has fervently backed NATO membership for Ukraine and Georgia even as Russian President Vladimir Putin sees NATO’s expansion toward Russian borders as a red line.

On the other hand, Ankara has opposed Western sanctions on Russia. “Turkey does not believe that sanctions will resolve the problems,” Foreign Minister Mevlut Cavusoglu insisted at the NATO meeting in Riga Dec. 1. Furthermore, the TurkStream gas pipeline from Russia to Turkey, inaugurated last year, shows Ankara’s willingness to go along with Russia’s strategy of diversifying energy routes by bypassing Ukraine.

And while Turkey backed the formation of a joint force between Black Sea littoral states in the 1990s, it appears enthusiastic today on US plans for a NATO naval force in the region.

Eager to make a good start with US President Joe Biden, Erdogan has invested much in the anti-Russian camp in recent months, bringing Turkey to a risky threshold that could draw the country into a possible war in the Black Sea. It was under these circumstances that Erdogan said Nov. 29 he was ready to mediate between Putin and Ukrainian President Volodymyr Zelensky, stressing that Ankara wanted “peace to prevail” in the region.

In remarks raising expectations, Russian Foreign Minister Sergey Lavrov said Erdogan and Putin could discuss the mediation offer in an upcoming phone call, which eventually took place Dec. 3. Yet, Foreign Ministry spokesperson Maria Zakharova ruled out any Turkish mediation on Donbass, the eastern Ukrainian region where pro-Russian separatists hold sway, arguing that Russia was not a party to “the domestic conflict” in Ukraine. Instead, she advised, Erdogan could try “to contribute to encouraging the Ukrainian authorities to abandon their belligerent plans for Donbass and finally start implementing the Minsk Agreements through a direct dialogue with representatives of Donetsk and Lugansk.”

In the same vein, Kremlin spokesman Dmitry Peskov suggested Erdogan should talk to Zelensky rather than Putin, saying that his mediation efforts would be welcomed if he could “use his influence to encourage Kiev to begin to comply with its commitments” under existing accords to end the conflict in Donbass.

A similar message was palpable in the Kremlin’s statement after the Erdogan-Putin call Dec. 3. Putin “stressed that Kiev has continued its destructive efforts to sabotage the Minsk agreements, such as provocative activities of the Armed Forces of Ukraine in the conflict zone, including the use of Bayraktar attack drones. It was stressed that Kiev must abandon all attempts to pressure Donbass through force,” according to the statement.

Meanwhile, Ukrainian Foreign Minister Dmytro Kuleba urged NATO to prepare a package of measures to deter a possible invasion by tens of thousands of Russian troops amassed at the Ukrainian border, including steps to boost military cooperation with Kyiv.

Asked about Erdogan’s offer, Kuleba had earlier welcomed “any effort that can help us to put an end to this war.” Yet Zelensky argued for direct talks with Russia in a Dec. 1 speech in parliament. “The war in Donbass has been going on for eight years. Eight years since Russia annexed Crimea. … And we must tell the truth that we will not be able to stop the war without direct talks with Russia,” he said.

Erdogan has previously passed messages between Zelensky and Putin. In September, for instance, Zelensky sought Erdogan’s help for the release of prisoners held by Russia.

Ankara may be offering to mediate, but its policies in support of Kyiv have earned it Russian accusations of fueling “militaristic sentiment” in Ukraine. Thus, Erdogan’s objectives and Putin’s expectations might seriously diverge. Moscow has been urging Ankara to refrain from steps that would embolden Kyiv on a military solution in Donbass, and a Turkish role in keeping Kyiv from a military adventure might please Putin. Yet, Erdogan is unlikely to step back from defense deals with Ukraine, as his unblinking quest for drone sales to conflict zones suggests. Similarly, there is no sign that Erdogan might change his view of Crimea as a Ukrainian territory under Russian occupation.

More importantly, the crisis has to do with NATO’s eastward expansion, meaning that for Russia, the essential bargaining has to be with the Biden administration, which is reportedly weighing sending weaponry to Ukraine, and secondarily, with the heavyweights of the European Union. To NATO’s strategy of expansion in Russia’s vicinity, including the deployment of air defense systems in Romania and Poland, Moscow has responded with military buildups in border regions, repeated military exercises in some 30 areas, including Crimea and the Ukrainian border, and the development of hypersonic missiles.

Zelensky’s recent claim of a Russian-backed coup plot against him could probably be added to the list of Russian ripostes.

Putin’s red line is clearly drawn. A Ukrainian military thrust to reclaim full control of Donbass or a NATO move to admit Ukraine might raise the specter of escalatory scenarios such as Russia sending troops to hold Donbass, making the region into a full-fledged buffer zone between NATO and Russia, recognizing the self-proclaimed Donetsk People’s Republic and Lugansk People’s Republic down the road or even replicating the Crimea scenario by annexing the region.

The Ukraine-Russia tensions have allowed Turkey to solidify its role in NATO’s Black Sea strategy and forge strategic ties with Ukraine and Poland, but not without heightening the risks in its relations with Russia. Erdogan’s game is unlikely to make him a winner in an eventual escalation. Conflict strategies in the Black Sea Basin in the past two decades have resulted in Russia’s territorial or demographic expansion, most recently with the annexation of Crimea in 2014. Earlier, Georgia’s Western-backed attempt to reclaim its breakaway regions of Abkhazia and South Ossetia resulted in Moscow’s recognition of both as independent states in 2008. And the election turmoil in Belarus last year removed the degree of distance that Minsk had created from Moscow in recent years. Belarus is now a menacing neighbor to Ukraine on its northern border.

In sum, Putin could appreciate Erdogan’s mediation offer if it serves to curb Turkish efforts to boost Ukraine’s military capabilities or push Kyiv to comply with the Minsk agreements. Turkey’s foreign minister held talks with his Ukrainian and Russian counterparts on the sidelines of the Dec. 2 gathering of the Organization for Security and Cooperation (OSCE) in Stockholm in a bid to ease the tensions. Notably, he emphasized that “compliance with the Minsk agreements is important.”

Those agreements, however, contain provisions that allow Russia to question Turkey’s role. In October, for instance, Moscow accused Kyiv of violating the Minsk agreements after the Ukrainian army released a video showing one of its Turkish-supplied drones destroying a howitzer used by the separatists in Donbass. The accord in question, reached in September 2014 shortly after a cease-fire deal, includes a ban on flights of military aircraft in the vicinity of the line of contact.

As Lavrov pointed out in Stockholm, Moscow wants assurances that the settlement parameters outlined in the OSCE-led Minsk process since 2014 remain unchanged as well as a security pact that would halt NATO’s eastward expansion. Moscow may value the OSCE role, but Turkey is clearly not a major interlocutor on this issue in its eyes. The dimensions of the crisis call for a new Putin-Biden summit.