Erdogan’s offer to mediate between the Russian and Ukrainian leaders reflects Ankara’s growing fears over the conundrums it could find itself in should war materialize. 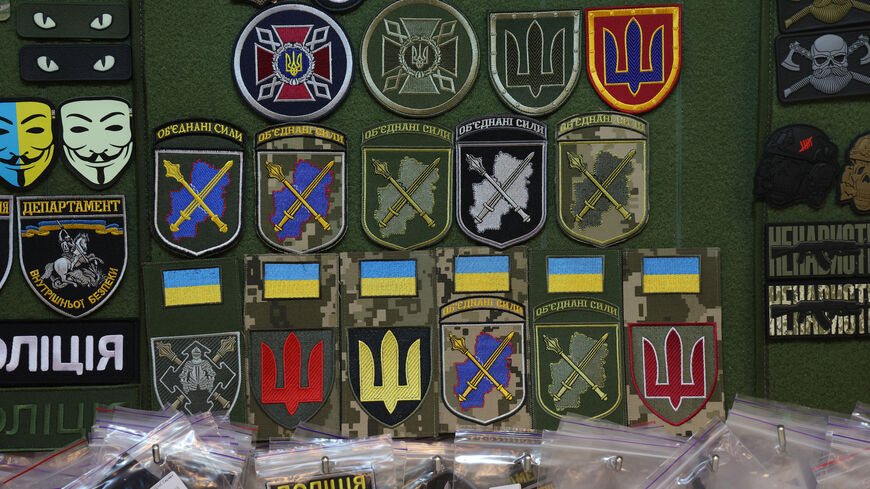 Military patches hang on display at the Militarist clothing and accessories store on Jan. 24, 2022, in Kyiv, Ukraine. - Sean Gallup/Getty Images

Erdogan’s mediation offer reflects Ankara’s fears of the conundrums it could find itself in should war in eastern Ukraine materialize.

Despite his close relationship with Russian President Vladimir Putin, Erdogan has caused anger in Moscow — not only by displaying staunch solidarity with Kyiv, but also by backing NATO’s strategy to expand its presence in the Black Sea region, including through moves that have raised questions over Ankara’s commitment to the 1936 Montreux Convention, which is crucial for Russian interests in the Black Sea. The convention regulates maritime traffic through Turkey’s Bosporus and Dardanelles straits — the maritime link between the Mediterranean and Black seas — and imposes strict limitations on the military ships of non-littoral states, effectively restricting the access of US and NATO naval forces to the Black Sea.

But now that the war drums are beating and Washington expects Ankara to stay steadfast, Erdogan is trying to put Turkey in a neutral position, at least in appearance. In phone calls with Putin and Ukrainian President Volodymyr Zelensky earlier this month, Erdogan invited the two leaders to Turkey. But with Russia shrugging, he now plans to visit Kyiv in early February and hopes to travel on to Moscow.

Kyiv has no objections to mediation by Turkey, a NATO member, though Zelensky has called for direct talks with Putin to end the conflict with pro-Russian separatists in Donbass. Yet, Erdogan’s approach to the crisis — he says the conflict in Donbass should be resolved on the basis of Ukraine’s territorial integrity and rejects Russia’s annexation of Crimea as an occupation — makes him an unlikely mediator in Russian eyes.

On Jan. 19, the Kremlin reiterated it would welcome Turkish efforts to “influence the Ukrainians and persuade them to fulfill [existing] agreements and commitments” — a reference to the so-called Minsk Accords of 2015. In other words, Russia is looking not for mediation but efforts to keep Zelensky from braving a military adventure in Donbass, emboldened by US and British support.

Moreover, Moscow has managed to turn the Ukraine crisis into a broader bargaining issue to stop NATO’s eastward expansion, which again makes Erdogan an unlikely mediator. Turkish Foreign Minister Mevlut Cavusoglu appeared to concede this point when he said last week that “NATO-Russia and US-Russia dialogue will be determining” in how the standoff unfolds.

While Turkey desperately needs to cool the tensions, Ukraine’s occasional use of Turkish-supplied armed drones in Donbass stands out as a potential headache for Ankara. At the weekend, Defense Minister Hulusi Akar sought to defend the drone sales as part of NATO commitments to nonmember partners. “It is up to Ukraine to acquire and use those systems. Turkey, as an exporter, cannot be blamed over them,” he said. “One should also take into account that Ukraine is part of NATO’s Enhanced Opportunities Partners. Therefore, enhancing Ukraine’s defense capabilities constitutes one of the points of NATO’s Individual Partnership Action Plans. Turkey has contributed to boosting Ukraine’s defense capacity, bilaterally and within the NATO framework,” he added.

Akar’s remarks could also be read as a rejection of Western claims that Turkey’s supply of armed drones to Ukraine has provoked Russia.

Turkey’s acquisition of S-400 air defense systems from Russia may be a glaring contradiction, but like many other Western allies, Erdogan appears concerned that Crimea’s annexation might not be the last chapter in Russian efforts to return to former Soviet territories on the grounds of protecting peripheries with considerable Russian populations. Russia has “usurped” Crimea and “things cannot go on with a mentality of occupation,” Erdogan said Jan 17.

At the same time, however, Erdogan feels the need to placate Putin, given the friendship between Ankara and Moscow, which has acquired a strategic orientation. As a result, he has zigzagged between backing the muscular attitude of the United States and Great Britain, backed by Poland, Estonia, Latvia and Lithuania, and the more cautious approach of European countries such as Germany, Austria and Hungary. The European disunity has made it easier for Erdogan to maneuver.

The emergence of new power blocs such as the US-British-Australian security pact to counter China and the Quadrilateral Security Dialogue initiative involving the same trio and Japan as well as controversial developments such as the unilateral US decision to withdraw from Afghanistan and Australia’s cancellation of a massive submarine deal with France shortly after the trilateral pact — have led to misgivings in NATO’s European camp, and Turkey has sought to take advantage of the cracks. But now, with the Ukraine crisis escalating, Turkey might be bracing to pay a price.

The US-British policy against Russia involves arms shipments to prepare Ukraine for a war and threats of sanctions that could sink the Russian economy. But at the same it squeezes Turkey over its ties with Russia, including the S-400s, Germany over its desire to maintain the Nord Stream 2 gas pipeline with Russia, Finland and Sweden over their nonalignment policy that keeps them outside NATO and any NATO member averse to the prospect of Europe becoming the theater a new bipolar influence war akin to the Cold War.

For Ankara, a pivot to moderation appears inevitable, no matter how harsh its rhetoric might be. A case in point is the Turkish attitude during the Georgian-Russian war in 2008, when Western-backed Georgia attempted to reclaim its breakaway region of South Ossetia. Although Ankara was a main backer of a train-and-equip program for the Georgian army in the leadup to the war, it refused to let US warships into the Black Sea as part of American moves to deter Russia, heeding the Montreux Convention. Eventually, Georgia’s plans to reclaim South Ossetia and Abkhazia were blown to smithereens as Russia came to the help of the breakaway regions.

A military escalation in eastern Ukraine might force Ankara to make tough decisions, especially with respect to its responsibility to maintain the navigation route through the Turkish Straits. Avoiding confrontation with Moscow is likely to be Ankara’s essential concern in such situations. Erdogan’s government has a long list of interests to consider, including the stability of the Turkish Straits and the Black Sea, the Akkuyu nuclear power plant that the Russians are building in southern Turkey, the security of gas supplies from its pipelines with Russia, the importance of Russian and Ukrainian holiday-makers for its tourism sector, the Russian markets of Turkish fruit and vegetable exporters, the many projects of Turkish construction companies in Russia, its hopes to expand its influence in the Caucasus after helping Azerbaijan in the Nagorno-Karabakh war in 2020 and its ongoing operations in Syria and Libya. Amid Turkey’s growing economic woes, even wheat imports from Russia are crucial now that bread prices in the country have doubled in a matter of weeks.

Even if Ankara manages to pull off an impartial position, Turkish-Russian ties could hardly emerge unscathed from this turbulence. It is hard to imagine that Putin will ignore Turkey’s sale of armed drones to Ukraine or Erdogan’s description of Crimea as a “usurped” territory. Potential Russian retaliation on issues such as the Cyprus conflict, Turkey’s military presence in Syria, Libya and Iraq or the Kurdish problem cannot be ruled out.