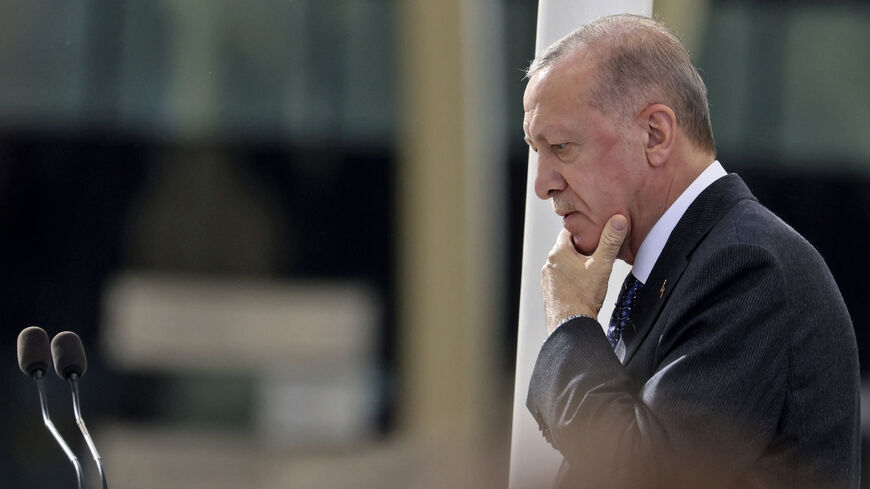 Turkish President Recep Tayyip Erdogan speaks at a national event at the Turkish Pavilion of Expo 2020, in the Gulf emirate of Dubai on Feb. 15, 2022. - KARIM SAHIB/AFP via Getty Images

However, unlike Britain or Germany, Erdogan kept quiet on any possible punitive action against Moscow, which supplies nearly half of Turkey’s natural gas and two-thirds of its wheat imports. Instead, he expressed support for a proposal by Ukraine’s beleaguered President Volodymyr Zelenskyy to put together a summit of the UN Security Council's permanent members and Turkey, Germany and Ukraine. Erdogan will also attend the online NATO leaders summit Wednesday. Earlier this month, Turkey offered to act as a peace broker between Ukraine and Russia, suggesting a top-level trilateral meeting in Turkey.

In one of his sharpest ever statements toward Moscow, Erdogan called the Russian move "unacceptable." “We repeat our call for common sense and respect for international law by all sides," Erdogan told reporters accompanying him during his four-day Africa visit, which he cut short to attend the online NATO summit. In January, the Turkish leader warned Russia against invading Ukraine — a move he said was unlikely — and criticized the West for its failure to deal with the crisis.

A Monday statement from the Turkish Ministry of Foreign Affairs also expressed support for Ukraine's territorial integrity. “The decision of the Russian Federation to recognize the so-called Donetsk and Luhansk Republics, in addition to contradicting the Minsk Agreements [a 2015 blueprint to end the Russia-Ukraine conflict over Donbas], constitutes a clear violation of Ukraine's political unity, sovereignty and territorial integrity,” the ministry statement said. “The Russian Federation’s decision is unacceptable, and we reject it.”

The statement urged “all concerned parties to act with common sense and abide by international law.” In a separate statement Tuesday, the ministry also urged Turkish citizens in eastern Ukraine to leave the region.

NATO member Turkey has been walking a thin line in Ukraine. Erdogan, who paid a visit to Ukraine in early February, has offered to act as a peace broker — an offer Ukraine’s Zelenskyy welcomed. Though Putin did not reject it outright, Moscow played for time, saying Putin could pay a visit to Turkey for further discussions after the Beijing Olympics.

Many analysts consider Turkey’s offer stillborn: Erdogan’s stance on Ukraine's territorial integrity and Ankara’s sale of combat drones to Ukraine as well as his rejection of Russia’s annexation of Crimea as an occupation have made him an unlikely mediator in Moscow’s eyes. Moreover, on Monday, the state-owned television channel Russia1 said Erdogan — along with his French counterpart Emmanuel Macron —  was one of the world leaders who wanted war in Ukraine, claiming that the Turkish leader would use the war to divert attention from the faltering Turkish economy and 50% inflation.

But Erdogan’s call for a summit also found an unlikely supporter: Ekrem Imamoglu, the social democrat mayor who grabbed Istanbul from Erdogan’s clutches in 2019, said that he supported the government’s offer at the Munich Security Conference and would be happy to host the tripartite summit in Istanbul.

A day before Putin’s recognition of the breakaway states, Erdogan’s top foreign policy adviser Ibrahim Kalin insisted in Istanbul that Erdogan’s offer was not only still valid, but “the most important and concrete proposal on the table.”

“A military clash in Ukraine would serve no one. Our expectations, hopes and efforts are all geared toward preventing a clash, military intervention or an invasion,” he said at a book fair in Istanbul. Speaking with Die Welt, Kalin also underlined Turkey’s reluctance on sanctions. "Sanctions against Russia are useless. You only postpone the problems," he said, adding that "new rules and principles" were needed for both Russia and the West to "feel safe.”

Speaking to journalists Tuesday, Erdogan said that if Turkey, if invited, would participate in a special summit bringing together the permanent members of the UN Security Council, Germany and Turkey — a suggestion Zelenskyy made during their phone call. During the call, the Ukrainian leader expressed gratitude for Turkey’s support for his country following Russia's latest “provocative decisions,” Zelenskyy tweeted. He also thanked Erdogan for supporting his summit proposal.

Asked by journalists whether Turkey was prepared for any instability in the Black Sea, Erdogan said that Turkey was ready to do what was necessary as a littoral state. “We are at the same time a Black Sea country. Since we are a Black Sea country, many precautionary packages have to be created. We have already taken these measures and will continue to do so,” he said without elaborating.

“In case of a war in Ukraine, Turkey would be one of the countries worst hit, politically and economically,” Kemal Kilicdaroglu, the chair of main opposition  Republican People’s Party, warned in parliament. “It also shows us how important it is to uphold the Montreux Convention,” a 1936 accord that gives Turkey control of naval passage between the Black Sea and the Mediterranean.

Kilicdaroglu’s words targeted previous statements by Erdogan and other ruling party officials opening the treaty up to discussion in a bid to enlist support for Canal Istanbul, a controversial project that aims to create a new waterway between the Black Sea and the Sea of Marmara.

Under the convention, Turkey is authorized to close the straits to all foreign warships or if it is threatened by aggression in wartime. In 2008, when Russia recognized the independence of the two Georgian regions of Abkhazia and South Ossetia, Ankara rejected US requests to let its warships pass the straits.

"With this status quo, there is balance, security and stability. We have stated at every opportunity that this is of vital importance, and we continue to do so,” he said in reaffirmation of his earlier statements in a video address to the army’s top brass on Jan. 31, right before Erdogan’s visit to Ukraine.