Fiddling with the delicate balance of power in the Black Sea might leave Turkey in a worse squeeze between Russia and the United States. 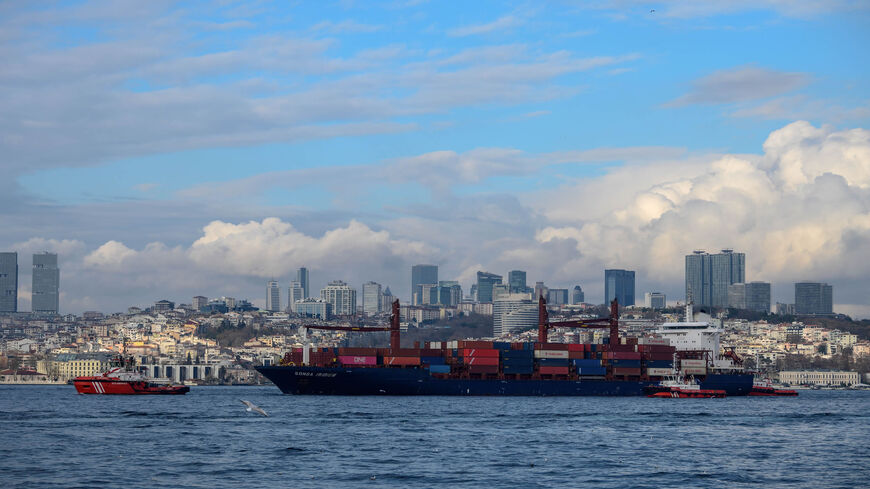 A Liberian-flagged cargo vessel is tugged by a coastal safety boat after it ran ashore in the Bosporus, Istanbul, Turkey, Dec. 27, 2019. - Bulent Kilic/AFP via Getty Images

Is Turkey on course to abandon its traditional balancing act between Russia and NATO in the Black Sea region? Ankara’s posture in the Ukraine-Russia standoff, coupled with its newfound ambivalence on a decadesold regime governing maritime traffic to the Black Sea, throws into question the balanced policy that Turkey has long pursued in the region.

In a rare alignment with Washington amid ongoing frost in bilateral ties, Ankara last week lent unequivocal support to Kiev in the face of mounting tensions on the Ukrainian-Russian border. The show of support for Ukraine coincides with an unprecedented controversy over Ankara’s commitment to the 1936 Montreux Convention, which regulates traffic through Turkey's Bosporus and Dardanelles straits — the maritime link between the Black and Mediterranean seas. The convention gives Turkey full control of the straits, while imposing strict limitations for the military ships of non-littoral states, effectively restricting the access of US and NATO naval forces to the Black Sea.

The decades-long geopolitical equilibrium set by the convention in the Black Sea has come under increasing strain since Russia’s annexation of the Crimean Peninsula in 2014 and the ensuing conflict between Russian-backed separatists and Ukrainian forces in eastern Ukraine. A fresh flareup in the past several weeks has seen a big Russian military buildup on the border with Ukraine, sparking a flurry of diplomacy to defuse the tensions. The United States and NATO have thrown their weight behind Ukraine and are gearing up for massive military drills in the region as part of the Europe Defender-2021 exercises.

After talks with his Ukrainian counterpart Volodymyr Zelensky in Istanbul April 10, Turkish President Recep Tayyip Erdogan called for the continuation of the cease-fire and a peaceful solution of the conflict, while asserting Turkey’s support for Ukraine’s territorial integrity. In a 20-point joint statement, the two sides pledged “to coordinate steps aimed at restoring the territorial integrity of Ukraine within its internationally recognized borders, in particular the de-occupation of the Autonomous Republic of Crimea … as well as the territories in the Donetsk and Luhansk regions.” Turkey also reaffirmed its support for Ukraine’s bid to join NATO.

Ankara’s posture in the Ukraine-Russia tensions will put to a serious test the main geopolitical parameters that it has thus far observed in the Black Sea, namely:

Turkish-Ukrainian cooperation in the military sector has dramatically increased in the past several years, making Ukraine Turkey’s chief partner in a series of crucial military technologies, including turboprop engines and drones.

Despite its deepening ties with Kiev, Ankara has maintained a close partnership with Moscow. Yet the controversy over the Montreux Convention, fueled by Ankara’s plan to build an artificial waterway — Canal Istanbul — as an alternative to the Bosporus, raise questions as to whether Ankara is still committed to its balancing act in the Black Sea.

Russian President Vladimir Putin must have had similar misgivings, for he called Erdogan on the eve of Zelensky’s visit to emphasize the importance of preserving the Montreux Convention.

So, what is driving Ankara into a position that opens the convention to debate and seems to challenge the geopolitical balance in the Black Sea at the expense of annoying Putin at a critical time?

The first has to do with domestic politics. Wary of its sagging support in the polls amid a bruising economic crisis, the government sees the Montreux and Canal Istanbul controversies as a fresh ground to play its hallmark policy of polarization and consolidate its conservative-nationalist base. This became evident earlier this month when it raised a ruckus over an open letter by 104 retired admirals calling for strict adherence to the Montreux Convention. Ankara lambasted the open letter as a tacit coup threat and launched legal proceedings against the retired admirals.

The second reason has to do with the Canal Istanbul project, which is not limited to digging a waterway with the stated aim of easing traffic through the congested Bosporus. The project involves also sprawling development on the banks of the canal, including residential areas for at least half a million people, business plazas, touristic venues, marinas and ports. With groundbreaking expected in the summer, preliminary estimates suggest the project could generate up to $60 billion in revenues for developers. To market the development plan to foreign investors, Ankara needs to call the existing Straits regime into question so as to provide a political cover to what many experts see as an economically unviable venture.

Atilla Yesilada, a well-known Turkish economist, argues that even if the entire Bosporus traffic is rerouted to Canal Istanbul, annual gross revenues from transit fees would total an estimated $1 billion, “meaning that inclusive of interest expenses and a fair return to undertakers of the project, the pay-back period is no less than 30 years.” Such a period, he said, is “extremely long” and makes the project “very risky” for foreign investors. Moreover, Yesilada believes the canal might never be completed as its “only sponsor” Erdogan could lose office before he oversees the completion of the construction, expected to take at least seven years.

Finally, Ankara seems to believe that the US quest for lasting military presence in the Black Sea region gives it leverage to use the Montreux Convention as a bargaining chip in the transactional relationship it seeks with the Joe Biden administration. The restrictive rules of the convention barred the US Navy from the Black Sea during the Russian-Georgian war in 2008. Russia’s annexation of Crimea further spurred US efforts for access to the Black Sea, including possibly through a naval base as part of NATO missions in Romania or Turkey. Similarly, the United States has backed Ukrainian plans to build new naval bases in the Black Sea region, while enhancing military cooperation with both Ukraine and Georgia as well as Romania and Bulgaria, the two NATO members other than Turkey that border the Black Sea.

Yet Ankara has come under harsh criticism at home for allowing any questioning of Turkey’s commitment to the Montreux Convention. In a succinct outline of the objections, Cem Gurdeniz, one of the retired admirals who signed the open letter, makes the following points, “Thanks to Montreux, the six littoral states of the Black Sea … have attained the opportunity to live in peace and tranquility. This balanced situation has continued from 1936 to date. Turkey has nothing to gain from a continuous operational NATO presence in the Black Sea or from pushing the limits of the Montreux Convention, including occasional attempts to breach some of its rules, or bringing about an imbalance … in the Black Sea. The Turkish Straits are the gateway of six nations, including Turkey itself. The greater the instability in the Black Sea, the greater the troubles for the Turkish straits and Turkey’s geopolitics. Therefore, littoral states should not fall for the prodding of NATO, the European Union and the United States in the Black Sea.”

How the Biden administration responds to Erdogan’s calculus remains to be seen. Will it go for a bargain and give Erdogan some concessions in return? Putin must be the most eager to know.