President Recep Tayyip Erdogan believed Russia would provide him leverage against the United States and Europe after Turkey’s ties with the West took a nosedive. 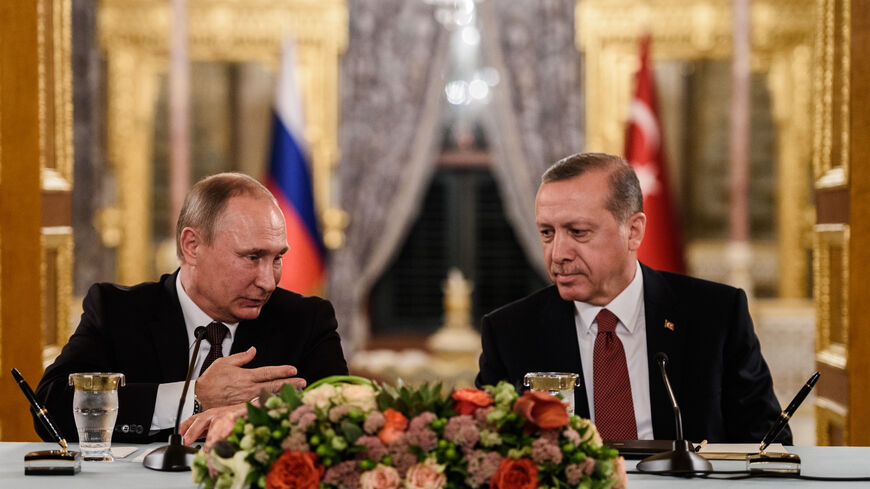 The partnership of convenience — some call it a transactional partnership — between Turkey and Russia is gradually reverting to the traditional rivalry between the two countries over diverging regional interests.

The crisis in Ukraine, which comes on the heels of the war between Azerbaijan and Armenia over Nagorno-Karabakh, has resulted in mutual suspicions surfacing again.

Turkey and Russia back opposing sides in these conflicts. The same is true in Libya and Syria where they are also at odds over a number of issues.

They are not on the same page in the Eastern Mediterranean either, where Turkey, Greece and Cyprus are vying for energy exploration zones.

Prompted by EU and US involvement in this dispute, Moscow is also seeking to protect its interest in the region.

This is a source of added discomfort for Ankara given the history of good ties between Russia and the Greek Cypriot half of the divided Island.

Put another way, the trajectory of current ties between Turkey and Russia is different from what President Recep Tayyip Erdogan had initially hoped for.

He was keen on a wide-ranging relationship, from military cooperation to vast energy projects, in order to counterbalance the losses Turkey had been incurring from its worsening ties with the West.

Many believed the personal relationship Erdogan built with Russian President Vladimir Putin and their shared dislike of the West would help facilitate his vision.

Erdogan even asked Putin in 2016 to help Turkey join the Russian and Chinese-led Shanghai Cooperation Organization (SCO) in order to free his hand with the West.

In the meantime, great strides were made in establishing wide-ranging economic cooperation between Turkey and Russia.

Ankara’s purchase of the multibillion-dollar S-400 air defense system from Russia — a move that remains incompressible for many Turks — also took place in this positive atmosphere.

However, what Erdogan ultimately desired goes against the grain of history given that Turkey and Russia have been in a state of rivalry or conflict over the centuries.

"... Presidents Erdogan and Putin come from the same cloth. They are both keenly aware as to why they collaborate and how far they can be fellow travelers and what separates them,” he told Al-Monitor.

“Turkey and Russia relations are not necessarily governed by a well-defined and institutionally established policy; at least not at its Turkish end,” he added.

“They both explore opportunities and engage for gain. Is this not what is called transactional? Once you are in the market, you gain some, you lose some.”

Nevertheless, Erdogan believed that developing ties with Russia to the maximum degree possible would provide Ankara with leverage against the United States and Europe after Turkey’s ties with them took a nosedive.

What he ended up with, however, is a Russia that ultimately obstructed his plans in Syria and Libya. The limited gains Russia allowed Turkey, especially in Syria, in order to appease it do not alter this fact.

Many associate Erdogan’s current efforts to mend fences not just with the West but also with regional rivals such as Egypt with the collapse of his foreign policy, which relied to a significant degree on ties with Russia.

Russian Foreign Minister Sergey Lavrov set the record straight in October 2020 as differences surfaced between Ankara and Moscow over the Nagorno-Karabakh conflict.

“We have never considered Turkey our strategic ally,” Lavrov said at a meeting with Russian media representatives.

“It is a close partner; that partnership has strategic nature in many areas,” he added for diplomatic good measure. But the key point of his message was clear.

Turkey’s strong backing for Ukraine has ruffled more feathers in Moscow where there are already grumblings over the sale of Turkish-made military drones to Kyiv.

The joint statement issued after the talks stressed Turkey’s commitment to seeing Sevastopol, Donetsk and Luhansk freed from occupation.

The statement openly referred to “the illegal annexation of Crimea by the Russian Federation” and expressed support for US-backed efforts by the “Crimean Platform” to resolve this problem.

Following Zelensky’s Istanbul visit, Lavrov called on all countries — although he went on to name Turkey only — to weigh the situation well and refrain from feeding what he referred to as “militaristic sentiments” in Ukraine.

Coinciding with this was a decision by Moscow to restrict the number of flights to Turkey, ostensibly due to the upsurge in Turkish COVID-19 cases.

Hakan Aksay, Turkey's leading expert on Russia, believes Moscow’s decision was a reaction to the results of the Erdogan-Zelensky talks in Istanbul, as well as Erdogan’s remarks regarding Crimea.

Turkish tour operators, who are relying heavily on tourism from Russia this summer, are recalling with concern the losses they incurred due to punitive sanctions by Moscow after Turkey downed a Russian fighter jet in Syria in 2015.

Erdogan was forced to apologize to Putin over that incident before economic and political ties improved.

“The best course for Turkey is to remain neutral in this dispute,” Aksay told the T24 news portal, underlining the vital importance Russia attaches to its conflict with Ukraine.

Turkey, however, has made its position known, and it is not a neutral one.

Dimitar Bechev, director at the European Policy Institute in Sofia, believes Ankara is leveraging its links to Ukraine in order to engage the United States.

“Rising tensions between Russia and Ukraine offer Turkey an opportunity to reinvigorate its ties with [the United States] and the rest of NATO,” Bechev argued in an article for Al Jazeera.

Another headache for Erdogan in ties with Russia is likely to be his ambitious and equally controversial Canal Istanbul project.

Moscow is closely following this pet project of Erdogan’s, which, if realized, would establish an alternative waterway running parallel to the Bosporus straits and linking the Black Sea with the Sea of Marmara and beyond.

Putin reportedly brought up the matter during a phone conversation he held with Erdogan April 9.

The Kremlin’s statement after the talks referred to the 1936 Montreux Convention, which regulates the passage of ships, especially warships, to the Black Sea. Russia is a signatory of the convention.

“In relation to Turkey’s Canal Istanbul project, the Russian side stressed the importance of maintaining the current regime in the Black Sea straits in order to guarantee regional stability and security, in line with the 1936 Montreux Convention,” the Kremlin said.

The Kremlin’s statement appears to say that canal or no canal, the Montreux regime should apply to all passages into the Black Sea. This is at odds with Erdogan’s desire to have a national canal where passage is regulated exclusively by Turkey.

Moscow, in its turn, has also been ruffling feathers in Ankara over a number of issues of close concern to Turkey.

An example is the bombing missions Russian jets conduct in northern Syria against groups in Idlib province that are either supported by Turkey or have taken refuge in regions under Turkish military control.

Russia’s ambassador in Ankara, Alexei Yerkhov, was summoned to the Foreign Ministry on March 22 to be informed of Turkey’s displeasure over these attacks, which Turkey says also targets hospitals and civilians.

In many ways, the relative benefits to Turkey from cooperating with Russia in Syria have reached their limits.

Russia also continues to have close ties with the People's Protection Units in Syria, which is a source of annoyance for Ankara. Turkey says this group is a Kurdish terrorist organization that poses an existential threat to its security.

Ankara is wary of Moscow’s involvement in Libya too. Russia’s indirect support for the renegade Gen. Khalifa Hifter ultimately stymied Turkey’s political and military efforts to see the internationally recognized Government of National Accord gain control over the whole country.

Ongoing joint economic and military projects provide an incentive to Ankara and Moscow to keep their rivalry in check for now. Nevertheless, it is unclear how long this can be maintained given heightened sensitivities over regional conflicts where they back opposite sides.