A warning by more than 100 retired Turkish admirals against scrapping an 85-year-old maritime treaty restricting foreign military presence in the Black Sea coincides with rising tensions between Russia and Western-backed Ukraine in the region. 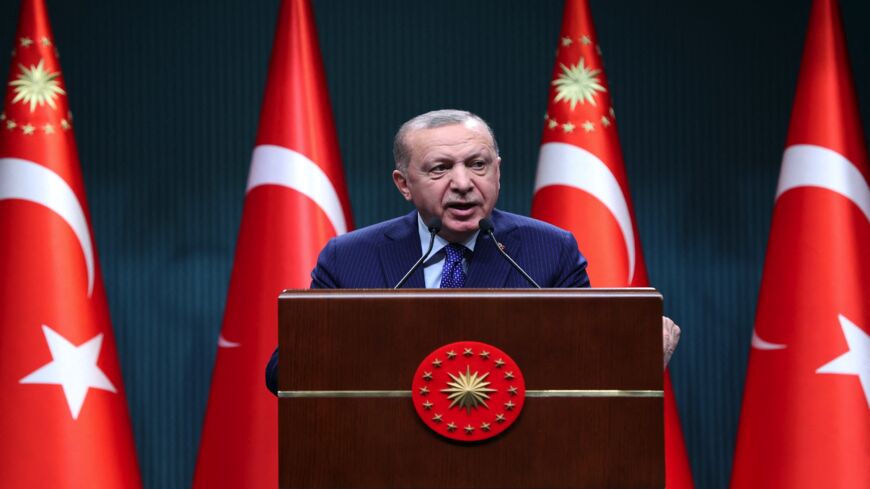 Turkish President Recep Tayyip Erdogan delivers a speech following an evaluation meeting at the Presidential Complex in Ankara on April 5, 2021. Erdogan accused dozens of retired admirals of eyeing a "political coup" by attacking his plans for a canal linking the Black Sea to the Mediterranean. His fury was directed at a letter published by 104 former admirals over the weekend urging him to abide by the terms of the 1936 Montreux Convention. - ADEM ALTAN/AFP via Getty Images

A debate on whether Ankara could scrap a key treaty regulating traffic through the Turkish Straits has been mired in a fresh “coup” clamor in Turkey’s domestic politics, but the issue has far-reaching international implications at a time when the United States and NATO are throwing their weight behind Ukraine in rising tensions with Russia.

On April 4, 104 retired Turkish admirals found themselves under fire for tacitly threatening a coup after they issued an open letter expressing concern over suggestions that Ankara could ditch the 1936 Montreux Convention amid government plans to build an artificial waterway parallel to the Bosporus Strait, which, along with the Dardanelles, forms the link between the Black Sea and the Mediterranean Sea. Though the coup accusations hijacked the debate, the apprehension of top navy officers, whose careers basically rested on the convention, could hardly be dismissed.

Turkish officialdom has firmly upheld the Montreux Convention over the decades as a document that asserts Turkey’s control of the straits, shields the Black Sea from international conflict and gives Turkey a strong hand in balancing Russia and the West. Under the Justice and Development Party, however, this vision has come to erode, especially since President Recep Tayyip Erdogan announced the Canal Istanbul project in 2011.

The United States has often wooed Turkey to flout the convention as it restricts the transit of military ships, with the tightest rules applying to non-Black Sea countries. During the Cold War, the convention precluded US attempts to deploy aircraft carriers, submarines and heavy-tonnage ships in the Black Sea to keep the Soviet Union under pressure. In 2008, Turkey denied permission to large US military vessels to enter the Black Sea, citing the convention, following Russia’s military intervention against Georgia in the South Ossetia conflict. Turkey’s then-President Abdullah Gul would later recount that he told US officials, “The presence of the fleets of two great powers in a small sea like the Black Sea would be dangerous. You’ll realize this in time.” To placate its NATO ally, Turkey stressed that the Montreux Convention was at the same time keeping the Russians from building up a large military presence in the Mediterranean via the Turkish straits, Gul said. According to the former president, the Americans later conceded Ankara was right, but they apparently stuck to their ambitions.

Atilla Kiyat, a retired Turkish admiral who was in charge of the Black Sea and the Turkish straits, recounts a 2009 conversation in which then-US Ambassador to Turkey James Jeffrey gauged the prospect of US-Turkish naval collaboration in the Black Sea. “Of course, but within the principles of the Montreux Convention,” Kiyat responded. The envoy argued that “nobody can do anything” if Turkey and the United States pressed ahead, according to Kiyat. “No, ambassador, this convention is of vital importance for Turkey and we cannot breach it for any reason,” Kiyat responded.

More recently, the US Embassy in Ankara shared a message expressing hope that “the Black Sea will be free [and] open for all nations of the world” following international military drills in the Black Sea in July.

The actual novelty in the Montreux story is the stance of Erdogan, who has questioned and even played down the convention, moving closer to the American position. Commenting on the retired admirals’ letter, Erdogan sought to cool the controversy but held his ground. “We have neither an ongoing work nor an intention to pull out from the Montreux Convention at present, but we’ll not hesitate to review any agreement with a view of securing a better one for our country if such a need arises in the future,” he said April 5. In Erdogan’s thinking, Canal Istanbul would bypass the Montreux Convention, as evidenced by his assertion that “thanks to Canal Istanbul, Turkey will gain an alternative that is fully under its sovereignty and beyond Montreux’s limitations.”

It was Erdogan himself who started the whole debate in 2019 as he argued why Turkey should build an alternative waterway to reroute traffic from the congested Bosphorus. Recalling a disastrous 1979 accident in the Bosporus involving an oil carrier that burned for nearly a month, Erdogan said, “Are you asking yourselves why this happened? And everything aside, what has Turkey gained and lost with the Montreux Convention?”

In an interview in January 2020, Erdogan was asked whether Canal Istanbul would effectively undo the Montreux Convention. “Don’t worry about Montreux,” he replied. “It is binding for the Bosporus only. Canal Istanbul is outside of its scope.” The Foreign Ministry, meanwhile, stuck to the official line, lauding the Montreux Convention as “an essential element in ensuring peace, security and stability in the Black Sea” in a presentation to parliament.

Advocates of the convention worry that the Canal Istanbul project would jeopardize Turkey’s existing rights over the Straits. In an open letter last year, 126 retired ambassadors warned that “Canal Istanbul will open the Montreux Convention up for discussion,” which, in turn, “could lead to Turkey losing its absolute sovereignty over the Bosporus and Dardanelles and the Sea of Marmara.”

The 1923 treaty preceding the Montreux Convention had banned Turkish military deployment along the Bosporus and installed an international commission to regulate maritime traffic. The Montreux Convention undid those provisions and gave Turkey the right to restrict or ban the passage of foreign military ships during wartime, while imposing strict limits on their transit in times of peace. The aggregate tonnage of all foreign naval forces in course of transit through the straits is limited to 15,000 tons, while warships belonging to non-Black Sea states are barred from staying in the Black Sea for more than 21 days. Those are the restrictions the United States would like to circumvent.

Russia, for its part, says Canal Istanbul should in no way affect the Montreux rules. Moscow would consider the project a Turkish matter as long as it does not change the Montreux regime, which not only sets rules for transit through the Bosporus and the Dardanelles, “but also regulates the total tonnage of the ships of coastal and non-coastal states,” Russia’s ambassador to Turkey, Aleksei Erkhov, said in 2019. “The presence of a new artery does not change the regime,” he added.

Recent developments in the Black Sea basin add to the significance of the Montreux controversy. The Joe Biden administration is on a quest to contain Russia and boost the NATO presence in the Black Sea. Amid renewed fighting between Ukrainian forces and Russian-backed separatists in eastern Ukraine, Biden last week asserted “unwavering support” for Ukraine “in the face of Russia’s ongoing aggression in the Donbas and Crimea.”

Erdogan, meanwhile, is seeking to mend fences with Washington, highlighting Turkey’s role in NATO, amid reports that Turkey might be helping Ukraine in plans to reclaim the Donbas and Crimea. Turkey in January assumed the command of the Very High Readiness Joint Task Force, created in 2014 for NATO’s eastern flank following Russia’s annexation of Crimea. Meanwhile, the United States and NATO partners are gearing up for major military drills in the Black Sea region.

Despite his rapprochement with Moscow, Erdogan has repeatedly rejected Crimea’s annexation and forged military cooperation with Ukraine. Turkey’s Bayraktar TB2 drones -- credited for Azerbaijan’s success in the Nagorno-Karabakh war last year – are at the heart of the Turkish-Ukrainian partnership in the military sector. Following the Turkish air force commander’s visit to Kiev in November, TB2 drones reportedly began flying over Donbas and near Crimea, alarming Russia. Such Turkish involvement in an eventual escalation makes the Montreux controversy all the more crucial.

The relations in the Black Sea neighborhood have dramatically changed since the six littoral states — Bulgaria, Georgia, Romania, Russia, Turkey and Ukraine — created a joint naval task force in 2001 to promote stability in the region. In 2002, the United States launched a train-and-equip program with Georgia, stepping into Russia’s backyard. Ensuing “color revolutions” sought to curb Russian influence in Georgia and Ukraine but proved detrimental to both nations. In the new realignment in the region, the issue of the Turkish Straits is emerging as a critical matter.

History teaches us that any change in the status of the straits has come at a hefty price. As Russia’s Nezavisimaya Gazeta notes, “With the construction of Canal Istanbul, the situation in the straits will return to 1913. At the time, the Ottoman Empire could, at its discretion, let or not let any foreign ship into the Black Sea. This was one of the reasons for the numerous Russian-Turkish wars.”