Turkey is reportedly gearing up to partner with China in the construction of an artificial waterway parallel to the Bosporus, a project with likely implications for Russia and the United States in the Black Sea. 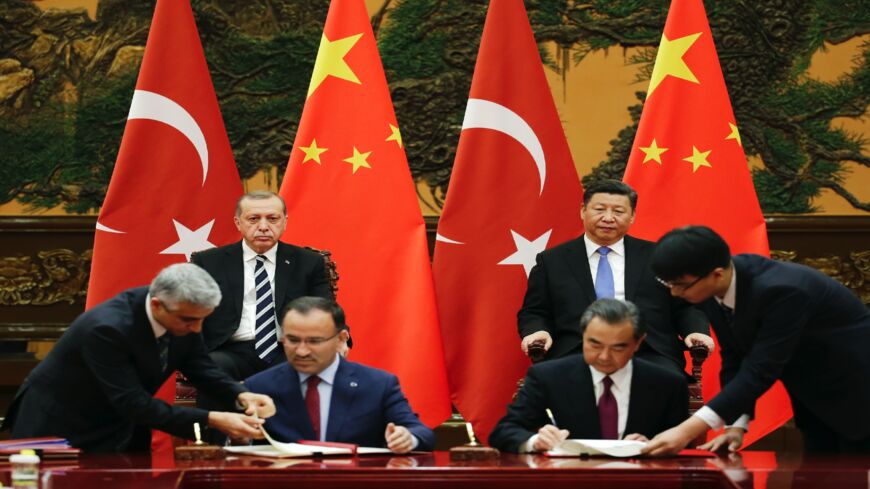 Turkish President Recep Tayyip Erdogan (back-L) and Chinese President Xi Jinping (back-R) attend a signing ceremony ahead of the Belt and Road Forum in Beijing on May 13, 2017. - JASON LEE/AFP via Getty Images

While Turkey remains stuck between the West and Russia on a number of strategic issues, its dilemmas might grow even more complicated with a Chinese addition to the equations, as reports suggest that China could assume a lead role in financing and building a controversial Turkish waterway to the Black Sea.

Turkey’s purchase of Russian air defense systems, US legal proceedings against a Turkish public bank for helping Iran evade US sanctions, rows over the Syrian Kurds and Turkey’s posture in the Eastern Mediterranean have led to unprecedented tensions in Turkish-US ties. In a bid to open itself a wiggle room, Ankara has recently moved to mend fences with its traditional Western partners, seeking to draw on the value of military and economic collaboration.

One way to do that could be through a high-profile Turkish role in NATO efforts to build up deterrence against Russia in its conflict with Ukraine. Turkey has already fostered military cooperation with Ukraine, including the supply of drones to Kyiv, and in January assumed the command of NATO’s Very High Readiness Joint Task Force, created in 2014 to deter Russia.

In another apparent move to woo the West and in conjunction with a Western strategy to distress Russia in the Black Sea, Ankara is seeking to speed up its project to build an artificial alternative to the Bosporus Strait, called Canal Istanbul, with the apparent intention of opening the 1936 Montreux Convention up for discussion or even bypassing it. The convention regulates transit through the Bosporus and the Dardanelles, which form a key maritime route linking the Black and Mediterranean seas. It gives Turkey control of the straits but rests on tight rules for military ships that restrict the entry of non-littoral naval forces to the Black Sea.

Canal Istanbul, dubbed a “crazy project” by President Recep Tayyip Erdogan when he first unveiled it in 2011, has attracted Chinese interest as part of China’s Belt and Road Initiative. Chinese companies are now reportedly eyeing the tender for the waterway, estimated to cost more than $9 billion.

Given Turkey’s economic woes, many had assumed that financing problems would snag the project, but the government came up with surprises. Since March 20, Ankara has announced a legal amendment paving the way for Canal Istanbul’s builders to benefit from state guarantees, the approval of development plans for the project and preparations to invite bids from contractors. Finally, Erdogan announced that construction would kick off in the summer. “Canal Istanbul … will be a new windpipe for the region. We will soon launch the tenders in phases and break the ground in the summer,” he said April 7, adding that a city for half a million people would be erected on the banks of the 45-kilometer (28-mile) waterway.

What led Erdogan to suddenly speed up the process? A financing offer from China, according to Turkish journalist Jale Ozgenturk. “The sought financial support is coming from China. Ankara is busy working on the issue. There are four proposals at present for the upcoming tender, and all of them are from Chinese companies,” Ozgenturk wrote April 9. “Of course, China will not only finance Canal Istanbul, [but] it will also assume the construction, having giants in the construction sector,” she added.

According to another business journalist, Serpil Yilmaz, Chinese lender ICBC and Hong Kong-based British bank HSBC are floated as the prospective financiers of the project. Financial news site Finans365, meanwhile, reported that ICBC was trying to create a consortium to finance the construction of the waterway.

In earlier years, the head of the Bank of China’s Turkey branch had said his bank was eager to finance infrastructure projects in Turkey, while media reports had mentioned China National Machinery and China Communications Construction among Chinese companies interested in Canal Istanbul.

By tendering Canal Istanbul to the Chinese, however, Turkey might face a trap reminiscent of its conundrum over the Russian S-400 systems.

First, there would be risks stemming from the modus operandi of the Chinese. According to Turkish media reports, a Chinese proposal two years ago involved up to $65 billion, including loans to finance the construction of the waterway and other investments as part of the sprawling project.

Though many see China’s purported “debt trap” diplomacy as a myth, opponents of the Chinese option in Turkey point to controversies in Kenya and Sri Lanka, where infrastructure projects have ended up in Chinese hands after failures to repay Chinese loans. In such projects, the Chinese typically issue loans and undertake the construction at the same time, using workers and materials mostly from China.

In December, Ahmet Davutoglu, Erdogan’s former premier and foreign minister who now leads an opposition party, brought up allegations of plans to allocate land to China around Canal Istanbul, warning that such a move would “do away with both national sovereignty and economic viability.”

As for the second risk, Ankara seems to be framing Canal Istanbul as a way to bypass the Montreux Convention, hoping to draw closer to Washington. But by awarding the project to the Chinese it would offer them a geostrategic advantage at the meeting point of Europe and Asia at a time when the United States is trying to contain China. The Chinese, who have already put money in strategic routes such as the railway tunnel under the Bosporus and the third suspension bridge connecting its Asian and European shores, certainly see Canal Istanbul as a precious leg in the Belt and Road project.

Two other potential projects might increase Canal Istanbul’s value for the Belt and Road. The first, which appears a very distant prospect at present, is a canal linking the Black Sea to the Caspian Sea, seen as a gateway to Central Asia. The other is a waterway similar to Canal Istanbul that would offer an alternative to the Dardanelles, running from the northern entry of the Dardanelles to the Gulf of Saros to the north. This proposal was mentioned only in a footnote in the environmental evaluation report for Canal Istanbul. But still, it seems a sign of integrated planning.

The prospect of Chinese financing backing bears on Ankara’s policy on the Uyghur issue. In the face of the Uyghur diaspora’s mounting campaign against China, Ankara’s attitude has stood out as indifferent and even gratifying to China. On March 10, lawmakers of the ruling party voted down a proposal by the opposition Good Party for a parliamentary inquiry into “inhumane practices” against the Uyghurs in China. The Uyghurs share ethnic roots with the Turks, and their region, Xinjiang, is often referred to East Turkestan in Turkey.

Ankara’s policy seems to have emboldened Chinese diplomats to shake fingers at Turkish politicians who are supportive of the Uyghurs. On April 6, the Chinese Embassy in Ankara posted a threatening Twitter message to Good Party leader Meral Aksener and Ankara Mayor Mansur Yavas after the pair commemorated the "Baren massacre” in “East Turkestan” in 1990. “The Chinese side resolutely objects to any person or force challenging China’s sovereignty and territorial integrity. The Chinese side reserves its right for a justified response,” the embassy said.

In a speech in parliament only days before, Aksener recalled that the development plans for Canal Istanbul were approved the day China’s foreign minister was visiting Turkey. Addressing Erdogan, she asked, “Are you hatching up something behind closed doors with China on the Canal Istanbul nonsense in this difficult time for our nation? Are you [giving up on] the rights and honor of the Muslim Turks in East Turkestan for a few billion dollars?”

Almost two years after their delivery, Erdogan has yet to figure out what to do with the S-400s, having bought them to show off to Western partners that Turkey is not without alternatives. Now, could his dream canal project turn into a nightmare tomorrow if he teams up with the Chinese? Nothing is transparent in Ankara these days, and sweet dreams cannot be taken for granted.