Turkish President Recep Tayyip Erdogan has chided NATO for failing to do more for Ukraine but remains averse to antagonizing Russia. 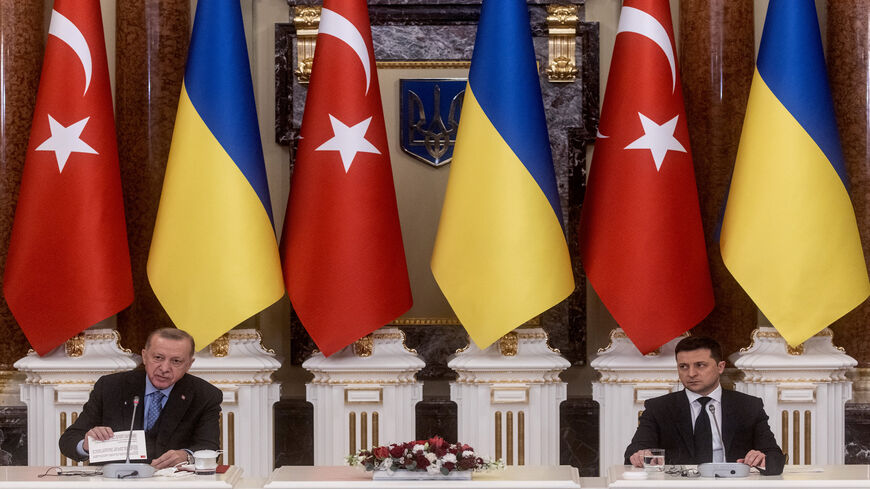 Faced with a tough balancing act, Turkey has been sending mixed signals on its position on Russia's invasion of Ukraine. President Recep Tayyip Erdogan, who has angered Moscow by developing military ties with Kyiv, has called for NATO action on the one hand, while stressing the importance of preserving ties with Russia on the other.

Erdogan’s unusual relationship with Russian President Vladimir Putin and purchase of the Russian S-400 air defense systems have shaken NATO allies’ confidence in Ankara in recent years. In the crisis over Ukraine, Erdogan said from the outset his stance would be in line with NATO decisions, signaling in a sense that he would not be obstructive. Some of his more recent messages, however, have sounded as if he is seeking NATO’s direct involvement in the fray.

“NATO should determine its position and do whatever it will do. As you know, we have not seen any serious [move] like troop deployment to Ukraine thus far. Everyone is just talking, but there is no action,” Erdogan told journalists Feb. 23 on a flight back from Africa, where the escalation of the crisis caught him. At the same time, he stressed that Turkey “cannot give up” on either Russia or Ukraine due to “the advanced level” of ties with both countries. His remarks suggest he wishes to weather the crisis without sacrificing Ukraine to Russia or Russia to Ukraine, yet his promise of solidarity to Ukrainian President Volodymyr Zelenskyy, with whom he has cultivated very close ties, is pushing him to take swipes at NATO for failing to do more.

In a heightened critical tone ahead of the NATO summit Feb. 25, Erdogan said, “This should not turn into an ordinary flurry of condemnations. [NATO] should take a more decisive step. We’ll see the positions of all leaders and declare our own. The pro-Western mindsets have failed to display a serious, resolute attitude thus far. They are all busy preaching Ukraine. No action has been taken. I hope the NATO summit will produce a more resolute stance.”

Despite urging firmer measures, Erdogan was not among the leaders who called the emergency NATO summit and it remains unknown what steps he proposed at the meeting.

First, it abstained from voting on Russia’s suspension from the Council of Europe Feb. 25, signaling a reluctance to be at the forefront against Russia. Turkey’s move might have stemmed also from the prospect of sanctions it faces at the Council of Europe over its failure to heed some rulings of the European Court of Human Rights. Unal Cevikoz, a senior member of Turkey’s main opposition party, slammed the move, tweeting, “History will not forget Turkey’s abstention.”

More importantly, Turkey has faced a dilemma over the Bosporus and Dardanelles straits, which form the maritime link between the Black and Mediterranean seas. Turkey is responsible for managing passage through the straits under the 1936 Montreux Convention, which outlines complex rules for peace and war times. Ukraine expects Turkey to close the straits to Russian ships under Article 19, a request submitted officially to Turkey’s Foreign Ministry by Ukraine’s ambassador to Ankara.

Ankara’s initial reaction was that it should determine whether or not the events in Ukraine amount legally to a war.

Speaking on the second day of the invasion, Foreign Minister Mevlut Cavusoglu stressed Turkey was not a party to a war before offering the following assessment, “Turkey can stop the passage of warships through the straits. Yet the Montreux Convention also stipulates that passage requests should be granted if vessels of belligerent parties request to return to their home bases. Our experts are now studying whether a state of war is underway. … If we acknowledge a state of war, we will ban the passage of warships under Montreux, but even then the Russians will have that right [on return to home bases].”

Article 20 leaves the passage of warships entirely to Turkey’s discretion if it is a party to a war, and Article 21 allows it to shut the straits if it considers itself to be threatened with an imminent danger of war. Warships belonging to non-Black Sea, nonbelligerent states are allowed transit on the condition that they notify Turkey 15 days in advance and stay in the Black Sea no more than 21 days, and that the tonnage of vessels in course of transit through the straits does not exceed 15,000 tons.

According to Riza Turmen, a prominent Turkish jurist, Russia could use two arguments against the closure of the straits — along with the provision on warships returning to home bases, Moscow might claim there is no state of war to invoke Article 19 by arguing that the two separatist regions in Donbas have proclaimed independence and Russian forces have moved in on their invitation.

Following a phone call with Erdogan Feb. 26, Zelenskyy thanked Turkey for its “strong support,” adding, “The ban on the passage of Russian warships to the Black Sea and significant military and humanitarian support for Ukraine are extremely important today. The people of Ukraine will never forget that!”

The message prompted media reports that Turkey had banned Russian warships from entering the Black Sea, but the Russian Embassy in Ankara said it had received no such notification and a Turkish official speaking to Reuters said no decision had been made. Istanbul’s coastal security authorities confirmed the straits remain open to Russian vessels.

Closing the straits to Russia and keeping them open to Ukraine and NATO could plunge Turkey into trouble. A Russian withdrawal from the Montreux Convention might result in Turkey losing an array of advantages on the control of the straits, which it was able to obtain in 1936 but are no longer available in international law. Hence, as a way out, it recalls the exception on the return to home bases without asserting a state of war. In the same vein, Omer Celik, deputy chair and spokesman of the ruling party, said Turkey “will use its discretion in favor of peace and de-escalation.”

Could a closure of the straits sway the course of events? Russia’s Black Sea fleet, based in Sevastopol, is already in the region in full force, and its ships in the Caspian are able to reach the Black Sea via the Volga-Don Canal and the Sea of Azov. In an eventual scenario of naval help to Ukraine, allied ships would be also barred from passing through the straits. Thus, Kyiv’s closure request resonates more as an attempt to push Turkey to take sides.

The Western sanctions on Russia pose another conundrum for Erdogan. When Russia annexed the Crimean Peninsula in 2014, Erdogan was similarly critical of Western inaction but refused to join US and European Union sanctions against Moscow. Asked whether Ankara would join the sanctions this time, Celik said that “no such considerations” were underway.

The NATO summit ended without any measures of the kind that Erdogan had brought up. The decisions focused on enhancing the defenses of member states on the eastern flank, including the deployment of additional ground, air and naval forces.

With US President Joe Biden repeatedly ruling out military action to help non-NATO member Ukraine, it was already obvious that NATO would not go farther as member states arm Ukraine individually in what is shaping up as a sort of a new proxy war. Hence, other motives seem to underlie Erdogan’s rhetoric. Since Biden’s election as president, Erdogan has sought to mend fences with estranged Western partners and the Ukraine crisis has given him an opportunity to evoke Turkey’s importance within NATO. By this means, he hopes to strengthen his hand on thorny issues such as Turkey’s expulsion from the F-35 joint strike fighter program, the upgrade of its existing F-16 jets, the US prosecution of Turkey’s state-owned Halkbank and US support for the Syrian Kurds.

Furthermore, Erdogan is facing conundrums stemming from the extraordinary aspects he has added to Turkey’s ties with Ukraine and Russia. Despite the obvious escalation in Ukraine, he has sold armed drones to Kyiv, angering Moscow. And by purchasing the S-400s from Russia, he has triggered a confidence crisis with the West, illustrated by how little Biden has communicated with Erdogan. And when Russia seized Crimea, Erdogan not only refused to join the sanctions, but eagerly accepted Russia’s TurkStream pipeline proposal, designed to replace an existing gas conduit to Europe via Ukraine.

Last but not least, Erdogan is facing economic considerations, as evidenced by the fact that the already embattled Turkish lira tumbled more than the Russian ruble Feb. 24, when the invasion of Ukraine began. Russia supplies 40% of Turkey’s gas needs and 25% of its oil needs. Some 66% of Turkey’s wheat imports come from Russia and 18.5% from Ukraine. The Russians are building Turkey’s first nuclear power plant, scheduled to become operational in 2023. Erdogan would hate to see that plan going down the drain at a time when Turkey is facing energy woes and household electricity bills have doubled or tripled ahead of elections next year. Turkey stands to take some of the worst blows from a protracted or expanded war in Ukraine.