Ankara "will to use its discretion in favor of peace,” a top ruling party official said on Ukraine's call for​ the Russian navy to be barred from passing into the Black Sea and for sanctions on Moscow. 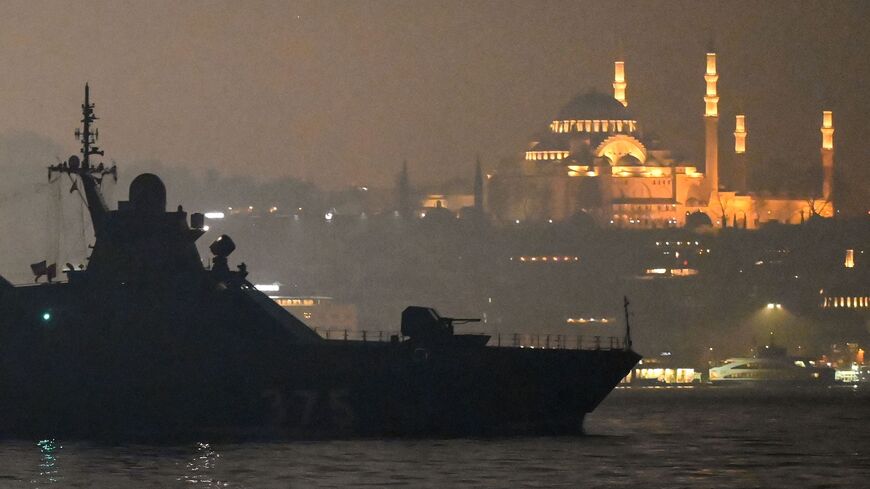 Russian Navy's Project 22160 Patrol Vessel Dmitriy Rogachev 375 sails through the Bosporus Strait on the way to the Black Sea past Istanbul, where Suleymaniye mosque is seen in the background, on Feb. 16, 2022. - OZAN KOSE/AFP via Getty Images

ISTANBUL — Turkey says it is evaluating Ukraine’s request for the closure of the Bosporus and Dardanelles straits to Russian naval vessels following Russia's multi-pronged assault on the country.

Spokesperson for Turkey’s ruling Justice and Development Party Omer Celik said Tuesday that Turkey has “assessed all the scenarios that would come out of the Montreux Convention,” in reference to a crucial treaty that asserts Turkey’s control of the straits linking the Mediterranean to the Black Sea and that it “will use its discretion in favor of peace instead of deepening the conflict.”

“Preparations both legally and diplomatically have been concluded. We will continue to follow the process. We certainly don’t want tensions to escalate further,” Celik said without elaborating.

The government has also assessed the conflict’s possible adverse impact on Turkey, Celik added. The Russian invasion has already taken a toll on the already staggering Turkish economy with the lira dropping more than 5% against the greenback.

The Ukrainian request was officially and personally relayed to the Turkish Foreign Ministry today by Ukraine’s Ambassador to Ankara Vasyl Bodnar.

“We conveyed our official request to the Turkish side regarding the closure of airspace and the Dardanelles and Bosporus for Russian ships.” The ambassador also asked Turkey to impose sanctions on Russia and seize Russian business assets.

Under the 1936 Montreux Convention, Turkey has control of the straits leading from the Mediterranean to the Black Sea. Earlier this month six Russian warships and a submarine passed into the Black Sea.

“Turkey should not remain neutral,” Bodnar said. “The Montreux agreement forms the legal basis for closing the straits.”

He also issued a call for assistance including financial, humanitarian and military aid.

However, in a speech following a security summit of ministers and advisers in Ankara, Turkish President Recep Tayyip Erdogan made no mention of possible sanctions on Russian President Vladimir Putin’s regime or any action to restrict Russian vessels.

Instead, Erdogan described the invasion as “contrary to international law” and a “heavy blow to the peace, tranquillity and stability of the region.”

He added, “I state that we find the military operation launched by Russia against Ukraine unacceptable and we reject it.”

Erdogan said he had spoken to Ukrainian President Volodymyr Zelenskyy by phone earlier to reiterate Turkey’s support for “Ukraine's territorial integrity” and called for dialogue between Russia and Ukraine. He had previously suggested Turkey host the two countries’ leaders for talks, an offer that was ignored by Putin.

The invasion came a day after a phone call between Erdogan and Putin. Erdogan reiterated Turkey’s commitment to Ukraine's territorial integrity, according to a readout from the Turkish presidency. Erdogan also stressed the importance of dialogue between Turkey and Russia.

The Montreux deal allows Black Sea nations such as Ukraine and Russia near unlimited access to the Black Sea but imposes strict limitations on naval vessels from other states. Extending the restrictions to include Russian warships would inevitably lead to Russian demands for the treaty to be renegotiated.

Fatih Ceylan, a former Turkish permanent representative to NATO, said the topic of sanctions against Russia was one Turkey would not want to engage with.

Turkey has close ties to both Ukraine and Russia. Visitors from both countries make up a significant proportion of its vital tourism revenue and it also has major trade deals with both.

Ankara has supplied Ukraine with Bayraktar TB2 drones, to the annoyance of Moscow, with which it cooperates in Syria. Turkey also received a Russian-made air defense system in 2019, alienating it from its NATO allies.

“The scope of the sanctions against Russia may be extended in the near future and a request may come to Turkey in this direction,” Ceylan told the Cumhuriyet newspaper. “Turkey may be stuck in a corner because any sanction to be imposed on Russia will negatively affect the Turkish economy. Therefore, Turkey needs to act very cautiously.”

Ali Oztunc, deputy leader of the opposition Republican People’s Party, said the Montreux Convention should not be altered. “We express the need for Turkey to strictly adhere to the Montreux agreement,” he said. “Turkey is not at war.”

The opposition Iyi Party said in a statement, “Considering the current fragility of our economy, priority should be given to minimizing the possible repercussions of the crisis on our country.”

Meanwhile, the Turkish Foreign Ministry issued a notice to Turkish citizens living in Ukraine asking them to “stay in your homes or in a safe place and avoid travel.” It said the necessary support would be provided for those seeking to leave the country. However, with Ukrainian airspace closed, Turkish students pleaded to be evacuated.

“We can see missiles flying from the windows of our home,” Can Kanak told the Diken news outlet from Kharkov, a city near Ukraine’s Russian border. “We want to return to our country and our families as soon as possible.”

A Turkish cargo ship leaving Ukraine’s Odesa port for Romania was hit by a bomb, according to the Turkish maritime authority. It said there were no casualties aboard the Jupiter.

Ukrainian residents in Istanbul staged a demonstration outside the Russian consulate demanding an end to Russian attacks while others headed to the Ukrainian consulate to try to get their families back home brought to Turkey.

“Everyone is afraid because they could also attack civilians,” Elena İleri told the Demiroren News Agency at the Ukrainian consulate. “I am trying to get my family from [Ukraine] but I don’t know how.”

In the Mediterranean city of Antalya, where some 30,000 Russians and 8,000 Ukrainians live, expats were shocked by the sudden outbreak of war.

“I am very nervous and wondering about the situation,” Ukrainian tourism worker Darya Yildiz said. “I am afraid. My husband offered to bring my family to Turkey. As Russians and Ukrainians, we are brothers. There is nothing [bad] between us.”