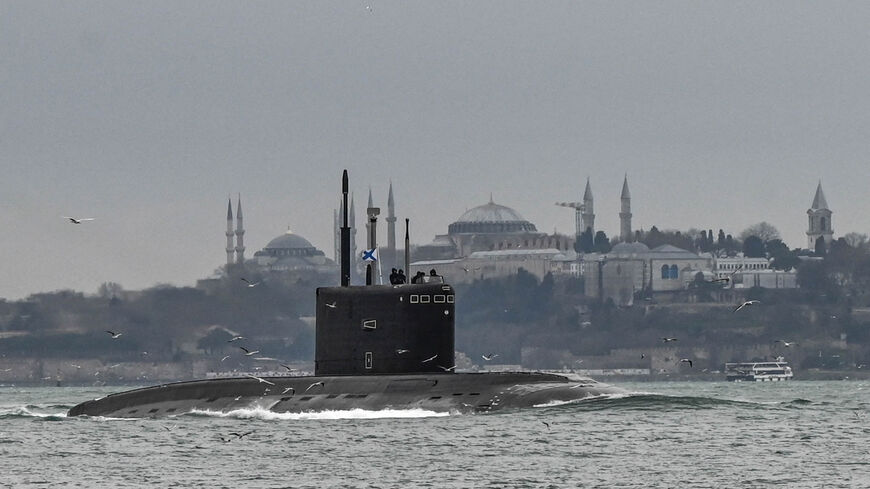 Russian navy's submarine Rostov-on-Don sails with a naval ensign of the Russian Federation through the Bosporus on the way to the Black Sea past the city of Istanbul, Turkey, Feb. 13, 2022. - Ozan Kose/AFP via Getty Images

Turkey will limit the passage of Russian warships through its straits linking the Mediterranean and Black Sea as the Russian invasion of Ukraine continues into its sixth day, in a move that will likely have a larger impact on the Syrian front than the war in Ukraine.

The position became public after Turkey’s top diplomat divulged details yesterday, following Ankara's depiction of the situation as “an unlawful war” on Feb. 27.

“We warned all countries, both littoral and non-littoral [to the Black Sea], not to pass their warships through the straits," Turkey's Foreign Minister Mevlut Cavusoglu said Feb. 28, “We implemented what Montreux says, and we will continue to do so from now on," he added. Turkey has the right to deny warships passage to and from the Black Sea during wartime, under the Montreux Convention, one of the founding treaties of the modern Turkish Republic.

What it means: Cavusoglu’s remarks do not amount to an official closure of the Dardanelles and Bosporus straits, but they indicate that Turkey will block the passage of some Russian warships from entering and leaving the Black Sea.

According to Sinan Ulgen, the chairman of the Istanbul-based Center for Economic and Foreign Policy Studies (EDAM) and a former diplomat, the remarks indicate that Turkey is “getting ready to” close its straits pending a passage request.

Ankara has received no requests for entry into the straits since the start of the war, Cavusoglu said, but signaled that Moscow has been trying to gauge Ankara’s position over the matter.

"The Russians have been asking us whether we were going to enforce Montreux or not if need be. In response we have been telling them that we would strictly enforce the treaty," Turkey’s top diplomat added.

Turkey’s position has earned Ankara a rare praise from Washington. US Secretary of State Antony Blinken thanked Cavusoglu for Ankara’s "continued implementation of the Montreux Convention" in a phone call yesterday, according to a State Department press release. The ties between the two NATO allies have been witnessing a downward trend over several disagreements between the two capitals, particularly due to Turkey’s purchase of the Russian air missile defense system S-400 and ongoing US support of the Kurdish-led Syrian Democratic Forces.

Why it matters: The decision came as a surprise as it was widely expected that Ankara would avoid staking out a position that could provoke the wrath of the Kremlin given the multidimensional cooperation between Turkey and Russia and the Turkish government’s balancing act between Moscow and Western capitals.

According to Ulgen, the move doesn’t reflect a “political decision” as Turkey is “obliged to invoke” the Montreux Convention’s wartime provisions “after deciding that what was happening in Ukraine was war.”

“This should not be seen as a sanction against Russia. This is Turkey's contractual obligation [under the Montreux Convention],” Ulgen said.

The move will unlikely have a “practical impact” on the ground as “Russia’s military elements in the Black Sea are already sufficiently strong,” a defense analyst told Al-Monitor on condition of anonymity. Most of the warships that belong to the Russian army's Black Sea Fleet are already positioned in the Black Sea, the analyst added.

In the run-up to the invasion, Russia transferred at least a dozen warships to the Black Sea including three Russian navy amphibious landing craft amid heightened tensions between Russia and Ukraine, according to the Turkey-based Naval News website.

"Secondly, Russia may assign a warship belonging to another fleet to its Black Sea fleet," the defense analyst added.

What’s next: Russia hasn’t reacted to the statement yet. But if Turkey moves to close the straits, then warships passing the other direction — from the Black Sea to the Mediterranean — will also be restricted.

Should Russia ask Turkey to allow the passage of its warships from the Black Sea to the Mediterranean, Ankara’s move might have ramifications for a Russian military presence in Syria. Russia has been controlling a large naval base in Syria’s northwestern city of Tartus. The base, the sole Russian naval base in the Mediterranean, serves as a major operational hub for Russian military activities in Syria and in the broader Mediterranean.

“Russia has set up a naval corridor between the Black Sea and Syria through which ships and submarines were regularly sailing in between,” Ulgen said. “Now this will be cut off.”

The absence of such liberty “may cause some problems” for Russia’s military presence in the Mediterranean with immediate impacts, Ulgen opined.