With its president set to visit Ukraine, Turkey has reassured Russia by reiterating its commitment for a key maritime treaty safeguarding Russia's rights in the Black Sea. 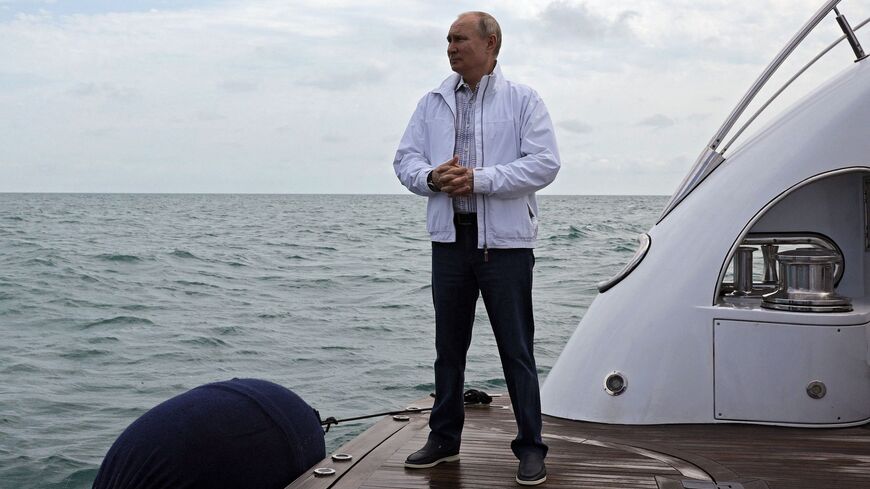 Russian President Vladimir Putin stands on a boat during trip on the Black Sea with his Belarusian counterpart on May 29, 2021, as the close allies met for a second day for informal talks amidst the outcry after Minsk diverted a European plane. - SERGEI ILYIN/Sputnik/AFP via Getty Images

Just days before Turkey's president is set to visit Ukraine, Ankara has reassured Moscow with a rare public display of support to a key maritime treaty safeguarding Russia's rights in the Black Sea, amid fears of a looming war between Russia and Ukraine.

Turkish Defense Minister Hulusi Akar stressed Ankara’s commitment to the 1936 Montreux Convention, one of the founding treaties of the modern Turkish Republic that strictly restricts NATO forces' access to the Black Sea. “We have always maintained that the status provided by Montreux is advantageous for all parties,” Turkey’s defense chief said in his video address to the army’s top brass on Jan. 31. “It is out of the question to give up on [the treaty] under today's conditions.”

Akar’s remarks came only days before President Recep Tayyip Erdogan’s Feb. 3 visit to Ukraine, whose purchase of Turkish combat drones has risked dragging Turkey into another conflict far away from its borders. Kyiv’s use of the drones to strike the Russian-backed separatists in Donetsk last October earned Ankara high-level rebukes from Moscow, with Russian President Vladimir Putin and Foreign Minister Sergey Lavrov telling off their Turkish counterparts in separate phone calls.

Akar’s remarks also represent a shift from previous statements by Erdogan and other ruling party officials opening the treaty up to discussion in a bid to enlist support for the Canal Istanbul project — a plan to build an artificial waterway linking the Black Sea and the Mediterranean. Most recently last year, Erdogan boasted that the waterway would be “entirely under [Turkey’s] sovereignty,” unlike the Montreux Convention that limits the military access of non-littoral states.

Such statements were widely seen as Ankara's attempt to win favors with Washington and other Western capitals in a bid to reverse the course of rapidly deteriorating ties between Turkey and the West over several disagreements, provoking firm opposition from Moscow. In any case, amid Turkey’s crippling economic turmoil, the prospect of concluding the project seems dim if not dark.

Akar’s fresh embrace of Montreux reflects Ankara’s efforts to survive the increasingly risky standoff between Russia and Ukraine with no or at least minimal harm as a potential war threatens Turkey’s balancing act between Moscow and its NATO allies, notably the United States. Despite some significant setbacks including its exclusion from the F-35 program for purchasing Russian-made S-400 air defense systems, Ankara has so far managed to maintain the act as its arms trade with the Kremlin’s regional foes and its ongoing multi-pronged cooperation with Russia indicate.