Turkey urges Russia to moderate demands on NATO over Ukraine

President Recep Tayyip Erdogan is offering to mediate the crisis, but its not clear Turkey has enough leverage to do so effectively. 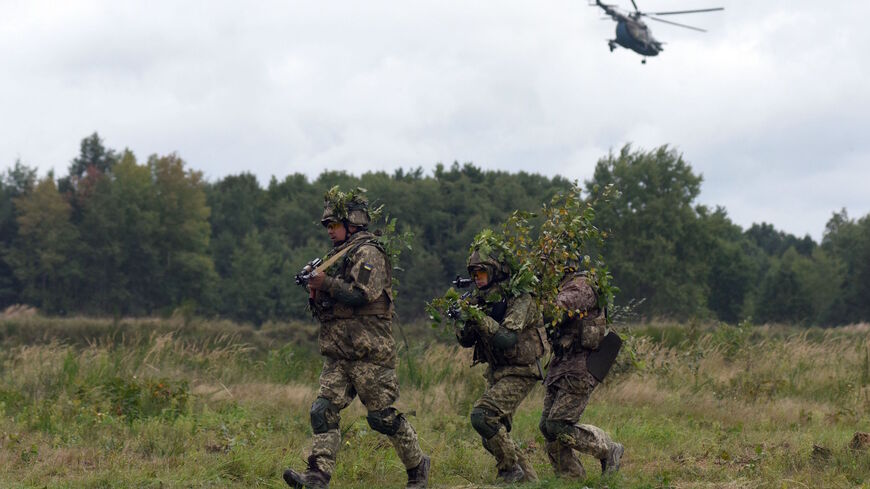 Ukrainian servicemen take part in the joint Rapid Trident military exercises with the United States and other NATO countries nor far from Lviv on Sept. 24, 2021, as tensions with Russia remain high over the Kremlin-backed insurgency in the country's east. - YURIY DYACHYSHYN/AFP via Getty Images

Foreign Minister Mevlut Cavusoglu said Russia should take a moderate approach in its demands with the western alliance.

“For any proposal to be accepted, it should be acceptable by both sides. Russia made some proposals. But maybe NATO seeks the same kind of guarantees from Russia. This is not a one-sided issue,” Cavusoglu told reporters on Monday.

“If the requests are maximalist — I'm not saying that Russia is maximalist in any case — both sides must be constructive," he said, adding, “They should come to the table with proposals that both sides can accept.”

“If Russia has any certain specific expectation or issue from Turkey regarding reducing tensions between Russia and NATO, Turkey will evaluate this positively, because our objective is clear,” the foreign minister stated.

“Everyone would be affected, God forbid, by conflict in the region.”

Cavusolgu’s comments come amid acute tensions over a massive Russian military buildup on its border with Ukraine. The Russian moves have sparked alarm in the western alliance and prompted urgent calls for additional arms transfers by Ukraine’s government.

Russian President Vladimir Putin and US counterpart Joe Biden spoke about the tensions and other issues in a more than two-hour video call earlier this month.

Why it Matters: NATO member Turkey under President Recep Tayyip Erdogan has maintained close ties with both Moscow and Kiev, missing no opportunity to play both sides of the West’s rivalry with Russia.

Yet Ankara’s support for Ukraine’s claim to Crimea, which Russia unilaterally annexed in 2015, and public support for Kiev’s future membership in NATO have proven to be a thorn in Putin’s side.

Ankara’s sale of Bayraktar TB-2 drones to Ukraine over the past year further angered the Kremlin, which sees Kiev’s increased defense transfers from NATO countries and calls by Ukrainian President Voldomyr Zelensky’s to join the alliance as an affront to Moscow’s regional interests.

The Turkish drones played a pivotal role in Azerbaijan’s victory over Armenian forces in the Nagorno-Karabakh war last year.

Meanwhile, the US has sent more than $2.5 billion worth of military aid to Kiev, including advanced Javelin anti-tank missiles, following a popular uprising that toppled Ukraine’s Russia-friendly leader in 2014.

Erdogan has been positioning his government as a mediator in the crisis, seeing Turkey’s interests in the Black Sea region as potentially threatened by any expansion of Russia’s war in Ukraine.

The Turkish president told reporters last month that he was speaking to Putin frequently about the issue.

Moscow’s response has been cool, at least publicly. Earlier this month, Kremlin spokesperson Dmitri Peskov said Erdogan’s mediation would be “welcome” if it convinces Kiev to abide by Russia’s demands regarding the Minsk Agreements.

What’s Next: More western military hardware will almost certainly flow to Kiev if Russia invades, but direct a military response by either the US or Turkey remains unlikely for now.

The Biden administration has offered to re-open talks between the NATO alliance and Moscow to ease Russia’s concerns. A meeting of the NATO-Russia Council has been proposed for January 12, though the Kremlin has not publicly agreed.