Russia’s Turkey policy to "drive a wedge between Turkey and its NATO allies" will not likely bear fruit when it comes to Ukraine. 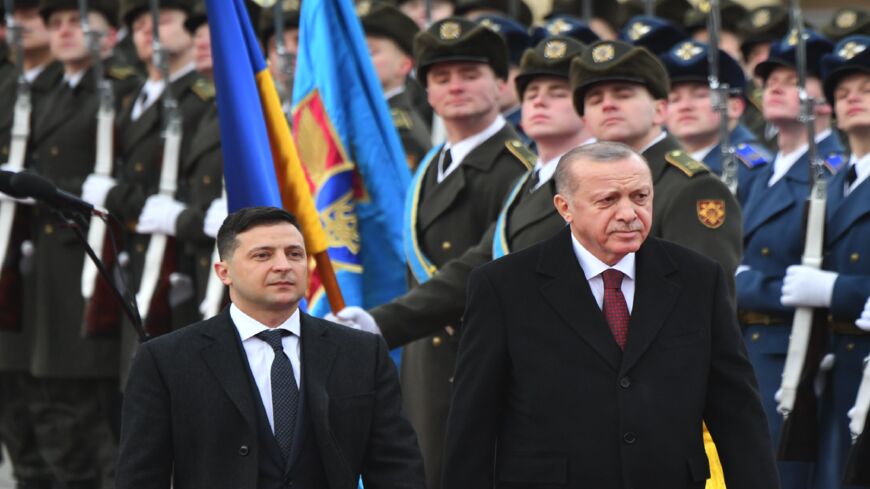 Ukrainian President Volodymyr Zelensky and his Turkish counterpart, Recep Tayyip Erdogan, review an honor guard during a welcoming ceremony prior to their talks in Kyiv on Feb. 3, 2020. - SERGEI SUPINSKY/AFP via Getty Images

KYIV — Turkey’s relationship with the United States is on the rocks, and the most immediate cause is Ankara’s refusal to get rid of its newly acquired, Russian-manufactured S-400 missiles that Washington says threaten NATO’s security. Yet when it comes to Ukraine, Ankara and Washington are in perfect lockstep vis-a-vis Moscow as witnessed by the outcome of Ukrainian President Volodymyr Zelensky’s April 10 meeting in Istanbul with Turkish President Recep Tayyip Erdogan.

A 20-point declaration signed by the two presidents left no doubt as to Turkey’s position. Notably, it called for an end to the “illegal and illegitimate annexation of Crimea, a former Ottoman dominion that is home to the Muslim Tatars, by the Russian Federation” and the “de-occupation” of the Donbas in Ukraine’s east, where Russian-backed Ukrainian separatists prevail. Turkey also reaffirmed its support for Ukraine’s membership in NATO and “its intention to obtain a Membership Action Plan in the near future.”

The show of support comes at a critical time. Over the past month, Russia has been massing troops, tanks and heavy artillery along its eastern border with Ukraine, the biggest build-up since its 2014 assault via Ukrainian proxies in the Donbas. The moves have set off alarm bells in Washington and NATO headquarters in Brussels, as Western leaders try to gauge Russian intentions. Is it about to mount a fresh attack and gobble up more chunks of Ukraine? Is it testing the resolve of the Joe Biden administration, which is taking a tougher stand on Russian misbehavior than Donald Trump did? Is it seeking to intimidate Zelensky, who since coming to power in 2019 in a landslide has been battling to beat back Russian influence, sanctioning pro-Moscow oligarchs and shuttering pro-Moscow news channels? Or is it a tactic to keep the conflict on the boil so as to ensure that Ukraine never joins NATO? The alliance’s rules stipulate that it does not grant membership to countries that are in conflict.

Few believe Russia is about to invade Ukraine, but the threat of an invasion provides leverage over Kyiv. Unlike the annexation of Crimea, a lush and balmy watering hole for freezing Russians, the absorption of war-ravaged Donbas would have little support inside Russia and would trigger a fresh round of debilitating Western sanctions. However, Western diplomats say military action by Moscow cannot be ruled out and needs to be taken seriously.

On April 9, Turkey’s Foreign Ministry confirmed that the United States would be sending a pair of warships to the Black Sea.

Secretary of State Antony Blinken and Secretary of Defense Lloyd Austin flew to Brussels Monday, where they will weigh a common strategy with fellow NATO leaders. The trip follows Ukraine’s call  for an emergency NATO meeting. Ukraine’s foreign minister,  Dmytro Kuleba, was expected to take part.

Turkey’s support for Ukraine is very important because it's “coming from a vital NATO ally which has a strong relationship with Russia,” said a Western diplomat speaking not for attribution to Al-Monitor.

An oft-cited reason for Turkey’s refusal to get rid of the S-400s — it's poised to take delivery of a second batch — is its “fear of Putin,” the concern that the Russian leader would in retaliation hit Turkey where it hurts the most in places like Syria’s Idlib or by banning charter flights carrying Russian tourists to Turkey as he did in November 2015 when Turkey downed a Russian fighter jet in Syria. (Russia announced today that it was suspending charter flights to Turkey from April 15 till June 1, but this was due to the sharp rise in COVID-19 cases in Turkey.) The stakes for Russia are far higher in Ukraine than either Syria or Libya where Ankara and Moscow are on opposing sides but manage their differences in ways that preserve their relationship and advance their respective interests. Therefore, it came as no surprise that a day before Zelensky’s arrival, Erdogan received a phone call from Putin.

Whatever the Russian leader had to say about Ukraine, the unequivocal wording of Saturday’s joint declaration placed Turkey firmly within the NATO camp, with its geostrategic value once again cast into sharp relief.

Ankara emerged even more forward-leaning than Germany, which is opposed to granting Ukraine a NATO “Membership Action Plan” because it doesn’t want to antagonize the Russians.

So what is driving Turkish bravura? And how will Russia likely respond?

Dimitar Bechev, a fellow at the Atlantic Council who follows Russia and Turkey, noted that Turkey has always been supportive of Ukraine “because it needs to counterbalance Russia” in the Black Sea and particularly since Moscow’s annexation of Crimea where it’s been bulking up its forces, including the deployment of S-400 missiles.

Unsurprisingly, Turkey and Ukraine have been deepening their military ties ever since. Ukraine produces engines for Turkey’s armed Bayraktar drones, which have tipped the balance of power in favor of Turkey’s allies in Libya and Nagorno-Karabakh. Ukrainian parts allow Turkey to export its own military goods without the worry of securing export licenses that it can no longer obtain from the United States, since being slapped with sanctions under the Countering America’s Adversaries Through Sanctions Act over its acquisition of the S-400s.

In 2018, Ukraine bought 12 Bayraktars and plans to acquire more, prompting excited chatter about how Zelensky hopes to “replicate” Azerbaijan’s victory against Armenia in Nagorno-Karabakh with the help of Turkish drones. This is overblown. Zelensky rose to power pledging a diplomatic solution to end the Donbas conflict and is well aware that Turkish drones will have little effect against Russia. The last thing he wants for Ukraine is another full-blown conflict with devastating effects. “They are not the ones moving troops, they are not the ones massing on borders,” the Western diplomat said. In a joint news conference with Zelensky, Erdogan also called for de-escalation. "We believe that the current crisis must be resolved through peaceful and diplomatic means, based on the territorial integrity of Ukraine and international law," he said.

When push comes to shove, Erdogan won’t take risks either. “Look what happened in 2014. Turkey denounced the annexation of Crimea but then refused to join Western sanctions,” Bechev recalled. “Bottom line, Turkey will be helping out by selling military hardware to Kyiv, providing assistance to Crimean Tatars in provinces outside the peninsula” and will remain “consistently supportive of NATO enlargement both in the Black Sea and in the Western Balkans, because this allows it to develop good relations with those countries at no cost.” Against this backdrop, “From the Russian perspective, Turkey does not make a crucial difference in Ukraine,” he said.

Certainly not in military terms. But “if we posit that Russia’s Turkey policy is intended to drive a wedge between Turkey and its NATO allies, strong support for Ukraine is a setback for that policy,” the Western diplomat said.