A diplomatic crisis between Israel and Russia has eased as Russia's leader apologized for his foreign minister's offensive remark and the world celebrates Victory Day over the Nazis. 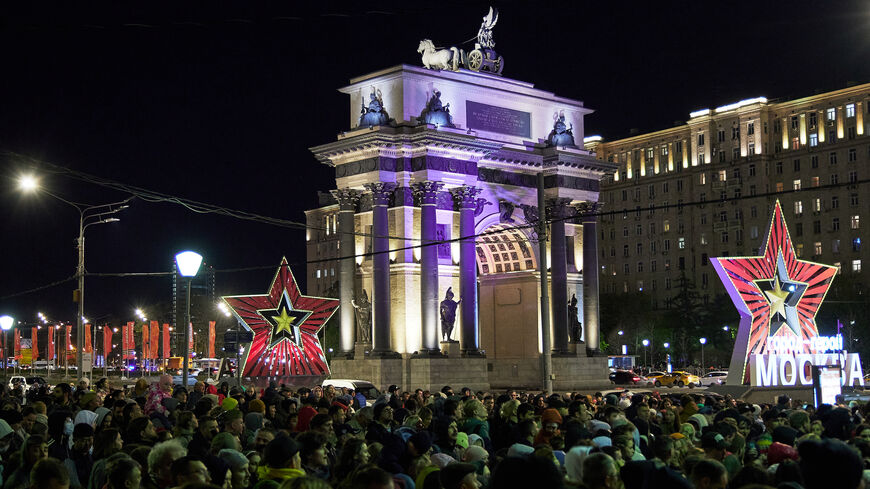 People go past the Triumphal Arch from the memorial museum of WWII at Poklonnaya Gora on May 9, 2022, in Moscow, Russia. - Oleg Nikishin/Getty Images

It was a call between the leader of a country celebrating its independence and the leader of a nation fighting for independence against a mighty power. As Israelis were celebrating their 74th Independence Day, Ukrainian President Volodymyr Zelenskyy surprised Israeli Prime Minister Naftali Bennett with a phone call in the late evening hours of May 4. Bennett was at home with his family in the suburban Tel Aviv town of Raanana. Kyiv-born Housing Minister Ze’ev Elkin, who was out celebrating with his wife at an event in Tel Aviv, was patched into the call to serve as interpreter. Zelenskyy could hear the partying in the background through Elkin’s cell phone. Elkin took a selfie of himself with his wife as he held the phone to his ear.

Zelenskyy asked Bennett to contact Russian President Vladimir Putin and ask him to approve the evacuation of the women and children besieged in the Azovstal steel factory in the destroyed city of Mariupol. The two men discussed how Putin could be persuaded to also allow the evacuation of wounded combatants from the site. Bennett promised to help.

A few days previously, a diplomatic crisis erupted between Israel and Russia over claims by Russian Foreign Minister Sergey Lavrov that Hitler was partly Jewish as were some of the world’s greatest anti-Semites, a reference to Zelenskyy’s alleged Nazi ideology despite his Jewish roots.

The following morning, May 5, Bennett called the Kremlin. Despite the diplomatic crisis between the sides and the harsh condemnations of Lavrov by Bennett himself, Foreign Minister Yair Lapid, Finance Minister Avigdor Liberman and many others, Putin called back within a few hours. He agreed to allow the evacuation of civilians but not combatants, even wounded ones trapped in the plant.

As the conversation neared its end, Putin apologized for Lavrov’s remarks. It surprised both Bennett and Elkin, who had planned to raise the issue themselves toward the end of the call with a request to Putin couched in diplomatic language about correcting distorted comments. But Putin got there first. After congratulating Israel on its national day, the Russian leader reportedly added that he would like to apologize for the things that were said. Putin reminded them of his attitude toward the Holocaust. Lavrov's comments, he said, were unfortunate, made in the midst of a fierce clash with the Ukrainians and do not reflect views in Russia regarding the things that happened to the Jews during the Holocaust. Israel, like Russia, also celebrates victory over the Nazis on May 9.

Bennett thanked Putin heartily and Elkin subsequently told Al-Monitor that the Russian leader’s apology “attests to the nature of the relationship between Israel and Russia.” Elkin added, “Contrary to what many people think, it is not a relationship based on interests, but on a solid infrastructure and mutual respect. We know Putin has a very warm spot for the Jews and for what they went through during the Holocaust, as was expressed in this phone call.”

An interesting exchange has since emerged from the phone call between Bennett and Zelenskyy. The Ukrainian president asked for Israel's May 9 celebrations of the victory over the Nazis not to take place this year. Bennett left it to Elkin to turn down Zelenskyy’s request. Elkin reportedly told Zelenskyy that the idea was unacceptable, saying that there are many Russian veterans living in Israel who were part of the victory over the Nazis and that Israel has no intention of preventing them from marking the date as they do every year.

Bennett's effort to mediate on Mariupol was a one-off. Bennett is not expected to resume the mediation efforts he made in the early weeks of the war. “That mediation has died out,” one of the prime minister’s senior aides told Al-Monitor on condition of anonymity. “Putin has not expressed an interest in continued mediation and Zelenskyy was not keen, either.” Meanwhile, noted the source, the mediation initiative has been overtaken by other urgent events: a wave of terrorism attacks within Israel and a coalition crisis endangering Bennett’s government. “Bennett is not really available right now,” the source said.

According to Israeli security assessments, the Ukrainians are no longer as desperate as they were at the outset. “Ukraine is being armed at a tremendous and unprecedented pace,” a senior Israeli security source told Al-Monitor on condition of anonymity. “The West has been channeling big money, weapons and ammunition there, Zelenskyy knows that his country will not be occupied and Kyiv is not under threat. Right now, neither side has an incentive to demonstrate flexibility and agree to end the war.”

Israel’s concerns that a clear stand alongside Ukraine would take a heavy toll on its freedom to attack Iranian targets in Syria have also been allayed to a large extent. According to several military sources with whom Al-Monitor spoke in recent weeks, Israel has no choice but to take a clearer stand on the invasion of Ukraine. “If this means we have to pay a price, we will pay. Maintaining neutrality at this stage is a burden we cannot bear, neither morally nor historically,” said one security official on condition of anonymity.