Jerusalem and Moscow continue to exchange accusations following the Sunday statement by Russian Foreign Minister Sergey Lavrov that Hitler was of Jewish descent. 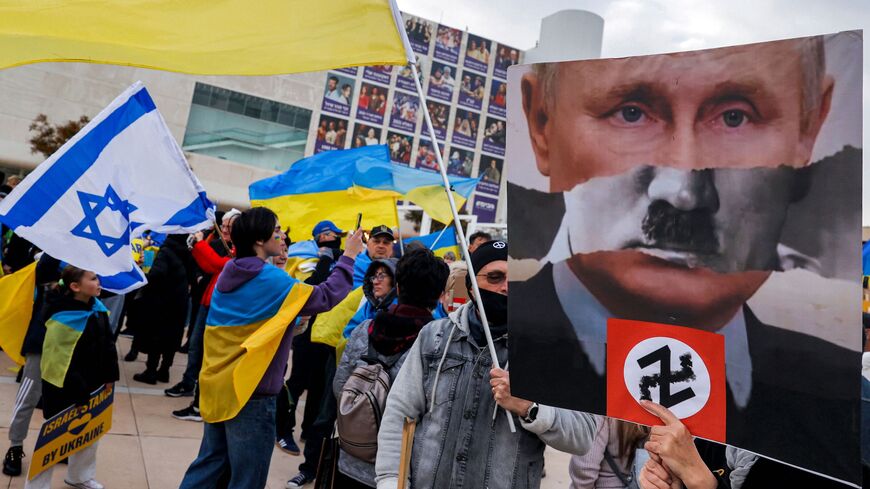 A demonstrator holds up a sign depicting the superimposed face of Russian President Vladimir Putin atop the signature toothbrush mustache of Nazi Germany's leader Adolf Hitler during a protest against Russia's invasion of Ukraine on March 20, 2022. - JACK GUEZ/AFP via Getty Images

Russian and Israeli foreign ministries have been entangled since Sunday in a Twitter war over a statement by Foreign Minister Sergey Lavrov comparing Ukraine to the Nazi regime. More accusations were traded between Moscow and Jerusalem this morning.

Since the beginning of the Russian invasion of Ukraine, Moscow has tried to link it to World War II. Russian President Vladimir Putin said, for instance, "The purpose of this operation is to protect people who for eight years now have been facing humiliation and genocide perpetrated by the Kyiv regime. To this end, we will seek to demilitarize and denazify Ukraine." In an interview May 1 with the Rete Italian television, Lavrov was asked how can Russia accuse Ukraine, with its Jewish President Volodymyr Zelenskyy, of being antisemitic. "When they say 'What sort of Nazification is this if we are Jews,' well I think that Hitler also had Jewish origins, so it means nothing. … For a long time now we've been hearing the wise Jewish people say that the biggest anti-Semites are the Jews themselves," responded Lavrov.

Israeli Foreign Minister Yair Lapid said after the interview that the Russian ambassador in Israel, Anatoly Viktorov, would be summoned for "a tough talk." Lapid called Lavrov's statement "unforgivable and scandalous and a horrible historical error,” adding, “The Jews did not murder themselves in the Holocaust. The lowest racism against Jews is to blame Jews themselves for anti-Semitism.”

Prime Minister Naftali Bennett said, "Such lies are meant to blame the Jews themselves for the most terrible crimes in history and thus free the oppressors of the Jews from their responsibility. No war today is the Holocaust or is like the Holocaust."

The head of Israel’s Yad Vashem World Holocaust Remembrance Center, Dani Dayan, also condemned Lavrov’s remarks, calling his words “false, delusional and dangerous and worthy of all condemnation.” Dayan tweeted, “Lavrov is propagating the inversion of the Holocaust — turning the victims into the criminals on the basis of promoting a completely unfounded claim that Hitler was of Jewish descent. Equally serious is calling the Ukrainians in general, and President Zelenskyy in particular, Nazis. This, among other things, is a complete distortion of the history and a serious affront to the victims of Nazism.” Interviewed by Israel’s public broadcaster Kan, Dayan said Lavrov was spreading an "anti-Semitic conspiracy theory with no basis in fact."

This morning, the Kremlin reacted to Lapid's statement, accusing him of making “anti-historical statements” that “largely explain why the current Israeli government supports the neo-Nazi regime in Kyiv.” The statement cited “cooperation between Jews and the Nazis” during World War II, giving as example the members of the Judenrat councils formed in several ghettoes, “some of whom are remembered for absolutely monstrous deeds.” The statement read that during World War II, some Jews were forced to participate in crimes, arguing that Zelenskyy, who is Jewish, “does this quite consciously and quite voluntarily.”

Lapid said this morning that Viktorov was subjected to a “tough conversation” but offered no more details. He added that Israeli diplomats in Russia “throughout the fighting in Ukraine have been summoned more than once by the Russian Foreign Ministry, and they don’t detail the conversation — that’s the protocol.”

Still, Lapid repeated his criticism of Lavrov’s original statement, saying it was “unforgivable to blame Jews for their own Holocaust. Hitler was not Jewish and Jews did not murder my grandfather in Mauthausen. The Nazis did it, and all of these comparisons to the Nazis are unforgivable and infuriating.”

Reports this afternoon in the Israeli press quote unnamed Israeli diplomatic sources as estimating that Lavrov's Sunday statement was a slip of the tongue. They said they believe Moscow had no intention of directly accusing Israel. As such, they said Moscow will probably not apologize for it. The sources estimated that the incident could soon come to its end.

When Russia invaded Ukraine, Jerusalem was hesitant to criticize Moscow and Putin openly on account of the Russian military presence in Syria and its involvement in talks with Iran, two top security concerns for Israel. Still, Lapid did condemn Russian aggression and again more harshly after the Bucha massacre.

Since the beginning of the invasion, the Ukrainians have been asking Israel to supply them with arms, but it was only recently, in an apparent shift in policy, that Defense Minister Benny Gantz said Israel will supply Ukraine with defensive equipment such as helmets. Visiting Israel yesterday, Estonian Foreign Minister Eva-Maria Liimets said Jerusalem has not blocked Tallinn from giving Israeli-produced weapons to Ukraine. Some defense export contracts have set limits on transferring Israeli know-how and arms to third parties.

Estonia reportedly purchased a considerable amount of weapons from Israel in the past year, including some 500 Spike anti-tank missiles and the Blue Spear missile system for coastal defense. On transferring weapons to Ukraine, said Liimets, “I am not aware of any obstacles at the moment.”