Prime Minister Naftali Bennett learned from the mistakes of his predecessor, former Prime Minister Benjamin Netanyahu, and is investing tremendous efforts into developing an intimate relationship with President Joe Biden. 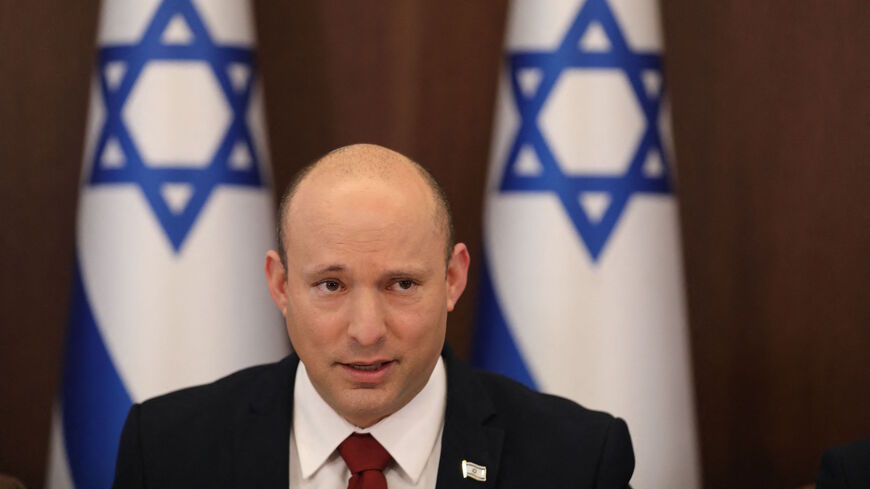 This week’s meetings between CIA director William Burns and his Israeli hosts have been described by insiders as excellent. Burns met with Prime Minister Naftali Bennett, Defense Minister Benny Gantz and new Mossad chief David Barnea to exchange views on Iran and prepare Bennett’s White House meeting with President Joe Biden later this month. According to senior Israeli officials privy to the discussions, Burns' goals for the meetings were realized in full.

Bennett presented Burns with the pillars of the new government’s policy on Iran, explaining that while Israel opposes a return to the original version of the nuclear agreement with Tehran, it would coordinate with the Biden administration and avoid going behind its back to thwart the deal.

Bennett also explained that Israel strives to agree on a joint strategy with the United States in the event that negotiations with Iran fail, dealing with all types of Iranian aggression, including its nuclear project and spread of terrorism, destabilization of regimes in the Middle East and proliferation of rockets and missiles.

The third item on the agenda concerns the Palestinian issue, with each side “recognizing the sensitivities of the other” on the matter. According to Israeli security sources, Israel plans to make substantive, tangible goodwill gestures toward the Palestinians in order to portray Biden in a positive light as delivering the goods to the Palestinian Authority and thereby gain his trust on Iran-related issues.

Bennett is trying to learn from the mistakes of his predecessor, former Prime Minister Benjamin Netanyahu. Rather than facing off against the president, as Netanyahu did against President Barack Obama and his sponsorship of the Iran deal, Bennett is investing tremendous efforts in developing an intimate relationship with him.

Bennett associates describe this tactic as “creating Biden-Bennett warmth, a special relationship of closeness, trust and cooperation.” They refer to the type of relations maintained by President George W. Bush with Prime Ministers Ariel Sharon and Ehud Olmert, a goal Bennett is unlikely to reach but feels it is worth trying.

Israeli intelligence tends to doubt that Iran under its new President Ebrahim Raisi will return to the nuclear deal and pursue the negotiations with the United States conducted by his predecessor earlier this year. In that case, Israel would seek to restore the military option as a last resort to prevent the Iranians from reaching military-grade nuclear capability. But Israel believes it should be an American option, too, and hopes it can convince Biden and his team to portray a military option as a realistic path.

Obama did so when he ordered the development of powerful bunker-busting munitions capable of penetrating Iran’s underground facilities, but Israel rued Obama’s failure to use them. The current Israeli government hopes Biden is made of sterner stuff given the assessment that only the existence of a powerful American military threat and Iranian belief in the United States' ability to carry it out would block the ayatollahs’ rush to a bomb.

Reportedly, Burns’ discussion with Bennett focused mainly on the Iranian nuclear issue. Gantz and Barnea presented Burns with detailed information about Iran’s activity throughout the region, including its alleged July 29 attack on the Israeli-managed Mercer Street oil tanker and the strange takeover of merchant ships in the Gulf.

As far as Israel knows, the Americans are also uncertain that Iran intends to return to the nuclear agreement. But while the Americans are seeking ways to get Iran to accept that an agreement is its best option, Israel hopes Iran does not go back to the agreement, leaving it and the United States free to discuss the best way to deflect the Iranian threat.

“We must work together,” a senior Israeli diplomatic source in Jerusalem told Al-Monitor on condition of anonymity. “Both of us together, and each side separately from its perspective, is the only way this can work.”

For now, senior officials working with Bennett are very pleased with the progress in the working relations between Jerusalem and Washington and the mutual understanding of the other’s needs. The intentions are sincere, but the tough question is how to create robust chemistry between a liberal, 78-year-old American Democrat and a religious, right-wing 49-year-old Israeli. Bennett’s fluent English gives him an edge, as does his American parentage. His aides have no doubt he can make inroads with Biden, who is perhaps the last Democratic leader to still harbor authentic and emotional sympathy for Israel.

However, Bennett faces a problem. If his Washington visit is all smiles, Netanyahu is waiting in the wings to claim that Bennett has sold out Israeli security in return for a pointless American embrace. Bennett will have to find a way to demonstrate determination and opposition to the Iran nuclear deal without risking bad blood with the Biden administration. The two sides likely discussed this dilemma at their preparatory meetings, including those that Bennett’s top adviser Shimrit Meir (who was recently interviewed on Al-Monitor’s “On Israel” podcast) and Israel’s new national security adviser Eyal Houlata held in Washington last week.

Israel’s new policy on the Palestinian issue was already evident this week. While the Bennett government approved the construction of hundreds of housing units for Jews in the settlements, for the first time since its inauguration in June, it also approved Palestinian construction in Area C of the West Bank. The trade-off went smoothly without generating US condemnation and a Middle Eastern storm.

According to Israeli diplomatic sources, Bennett and Burns took time out from Iran-related matters to discuss the fight against the coronavirus. Tell the president, Bennett asked Burns, in my name and in the name of Israel’s health care system, to move full steam ahead on a third vaccine jab, a booster. We are fully invested in this move and the results are excellent. Tell the president to advance at full speed toward the third vaccine. Burns promised to convey the forceful message.