Israel treads cautiously as fire exchanged on border with Lebanon

Israel’s border with Lebanon is increasingly volatile like the roiling Gaza front in the south. 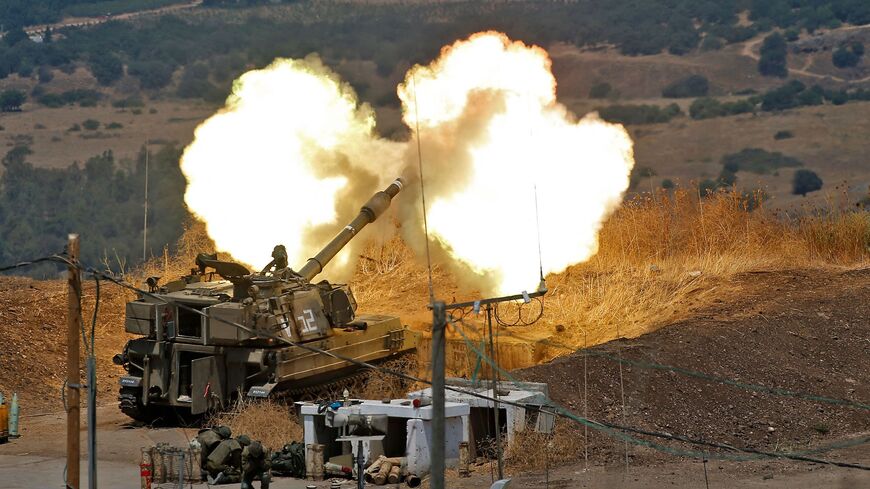 Israeli self-propelled howitzers fire toward Lebanon from a position near the northern Israeli town of Kiryat Shmona following rocket fire from the Lebanese side of the border, on Aug. 6, 2021. - JALAA MAREY/AFP via Getty Images

Israel is going out of its way to prove that Hezbollah did not know in advance about the three rockets fired Aug. 4 at the northern border town of Kiryat Shmona. Military sources attributed the attack to an ad hoc local group of Palestinians from the refugee camps dotting the south Lebanon. According to the Israeli army, Hezbollah was not involved in the incident and did not greenlight the attack as it lacks the time, energy and resources for such an initiative. According to a senior military source, the hold of the pro-Iran Shiite organization on southern Lebanon is weaker today than it was in the past due to the rapidly deteriorating situation in Beirut and the resulting domestic pressure on Secretary General Hassan Nasrallah, meaning he may not necessarily be apprised such activity.

Still, it is hard to ignore the facts. Katyusha rockets were fired from southern Lebanon into the Galilee panhandle five times in recent months. At this rate, the children of Kiryat Shmona and its surroundings along the Lebanon border will share the experience of those living in the communities on Israel’s southern border with Gaza. Israel has often stressed that the occasional rocket firing from Gaza, euphemistically known as “spillover” or “drip,” was the work of rogue Palestinian groups operating without Hamas approval. That concept lost credence a long time ago.

“There is no way that anything can happen in southern Lebanon without Hezbollah’s okay,” a former senior intelligence official told Al-Monitor on condition of anonymity. “We are deluding ourselves.” Despite the crisis in Lebanon and the pressure on Nasrallah, he added, southern Lebanon is his bailiwick “and nothing happens there against his will.” Israel is busy ramping up international diplomatic pressure on Iran following the July 29 drone attack on the Israeli-managed Mercer Street tanker and it does not want to be diverted by clashes on its northern border and risk igniting the entire front.

Out of the three rockets fired at Israel on Aug. 4, two landed in uninhabited areas of Kiryat Shmona, setting brush fires. The Israel Defense Forces responded with an unusual barrage of some 100 artillery shells toward what it calls the “launch site,” which is a way of saying that the Israelis, too, were firing at uninhabited areas to avoid hitting local Lebanese residents. But the shelling was only the start. A few hours later, Israel's air force struck targets in southern Lebanon for the first time in seven years. This attack did not produce casualties, either.

Israel is trying to have its cake and eat it, too — to retaliate aggressively without escalating things just weeks ahead of Prime Minister Naftali Bennett’s visit to Washington, before it has fully exploited the global diplomatic campaign it is waging against Iran, Hezbollah’s patron, funder and operator.

That being said, a much more significant barrage of Katyusha rockets was fired this morning, Aug. 6, from southern Lebanon at Israel. At the latest count, the barrage included 19 rockets. The Iron Dome missile defense system intercepted 10 of them. Three more fell in Lebanese territory and the rest in open areas. This time, Hezbollah claimed responsibility, calling it a response to the airstrike in southern Lebanon one day earlier.

As this article is penned, Israel's military and political leadership is discussing how to respond. The first signs indicate a desire to contain the event. Hezbollah deliberately fired at open areas, which proves its intentions were deterrent, said the IDF.

The question now is whose deterrence is stronger.

Israel is trying to formulate a coherent policy on its complex northern front that addresses not only Hezbollah and other pro-Iran militias operating out of Syria, but also Iran’s nuclear weapons ambitions, Iran’s entrenchment in Syria and the Iran-sponsored project to upgrade Hezbollah’s rockets into a precision missile arsenal of hundreds of rockets. Such an arsenal would be a tie-breaker.

Bennett has reiterated the concept of quid-pro-quo retaliation against Iran whenever one of its proxies strikes Israel. Following the Mercer Street attack, Bennett said, “Iran knows the price we will exact from those threatening our security.” He traveled to the underground headquarters of the Northern Command and met with IDF Chief of Staff Lt. Gen. Aviv Kochavi, Northern Command Chief Maj. Gen. Amir Baram and other top brass. “We are working to enlist the whole world, but when the time comes, we know how to act alone,” the premier said. “They can’t sit calmly in Tehran while igniting the entire Middle East — that’s over.”

Is it? Bennett is now learning the difference between giving advice from the Knesset opposition benches or even from the office of the defense minister, which he occupied briefly in 2020, and being in the hot seat where the ultimate decisions are made. Israel has an almost inexhaustible list of direct or indirect means to hurt Iran, such as a clandestine operation within Iran by Mossad agents, a remote cyber-attack on strategic installations or a direct aerial strike in Iran or on Iranian forces in Syria utilizing the full power of Israel's air force.

Still, the attack on the Mercer Street, which took place even as Ebrahim Raisi, who Bennett has called the “hangman” of Tehran, was being sworn in as president of Iran, provides Israel with leverage in its ongoing efforts to block Iran. Despite his militant views, Bennett will have a hard time abandoning such a diplomatic goldmine in favor of military retaliation. The time for such an attack could come down the line, after his visit to Washington and after the diplomatic campaign has run its course.

Bennett’s aides, policy adviser Shimrit Meir (who was a guest on Al-Monitor’s "On Israel" podcast) and national security adviser Eyal Hulata, visited Washington this week for talks with senior administration officials, including national security adviser Jake Sullivan, to prepare for Bennett’s meeting with President Joe Biden later this month. This visit is expected to be decisive in shaping the relationship between the two men and cooperation between today's Israel and Biden’s America.

Iran 10 weeks away from having sufficient fissionable material for a nuclear bomb, according to a briefing by Defense Minister Benny Gantz and Foreign Minister Yair Lapid to foreign ambassadors in Israel. Against this sensitive and dramatic backdrop, Bennett cannot afford unnecessary gambles. True, Gantz issued several particularly militant statements against Iran this week, saying Israel has the capability and option of a military strike against Iran’s nuclear program, but talk is cheap.

Former Prime Minister Benjamin Netanyahu left Israel unprepared for an offensive against Iran and at the mercy of the Biden administration. The new state budget approved this week by the government includes an emergency allocation of 7 billion shekels ($2.17 billion) for the IDF, some of it intended to update the military option. But such preparations take time, and the overall sense is that neither side has much of that resource left.