Meanwhile, Israeli prime minister is ready to "send a message" to Iran in response to drone attack on Israeli-managed ship that killed two. 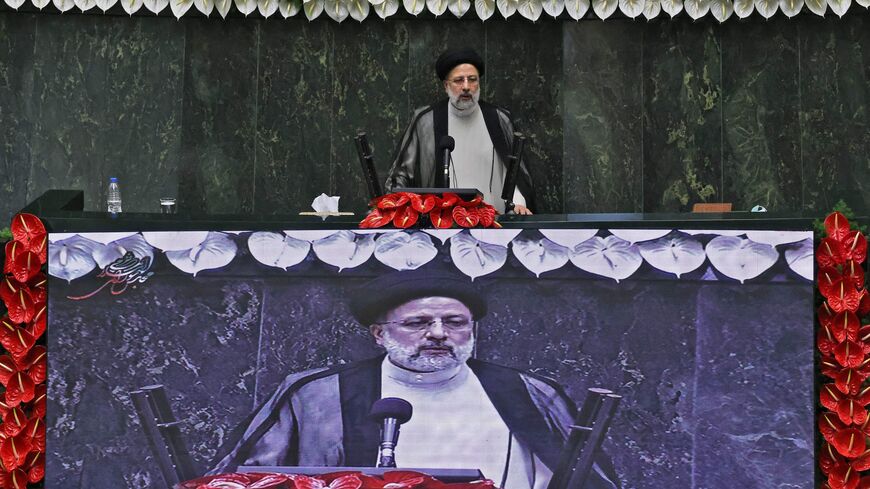 Iranian President Ebrahim Raisi speaks at his swearing-in ceremony at the Iranian parliament in the capital, Tehran, on Aug. 5, 2021. - ATTA KENARE/AFP via Getty Images

Iran’s new president, Ebrahim Raisi, offered some mixed messages to those looking for clues as to how he will conduct his foreign policy.

To those hoping for a hint of pragmatism, Raisi, speaking at his swearing-in ceremony at the Islamic Consultative Assembly (or parliament) Aug. 5, said the "crises of the region must be resolved through real intra-regional dialogue and on the basis of ensuring the rights of nations," adding, "I extend a hand of friendship and brotherhood to all countries in the region, especially neighbors, and I warmly shake their hands."

For those looking for signs of the hard-line revolutionary, Raisi lauded Iran’s model of "religious democracy" and committed his country to resisting "the extravagance of the arrogant and oppressive powers," including in Syria, Yemen and Palestine, adding, "The people want the Islamic Revolution to be realized in the true sense of the word, and all the features of the Islamic Revolution to be visible in the structures, processes and beliefs of the statesmen."

"Listening to those words were delegates from the Palestinian movements Hamas and the Islamic Jihad as well as Lebanon's Hezbollah, groups Iran backs and funds for what it calls legitimate causes," our correspondent reports.

The presence of a European Union representative at the inaugural ceremony sparked condemnation from Israel, human rights groups and others.

Iran will "support any diplomatic plan" to lift sanctions

With regard to the Iran nuclear talks, Raisi sent a flare to Washington and the EU that a deal may still be possible.

Raisi repeated the fatwa of Supreme Leader Ayatollah Ali Khamenei that nuclear "weapons have no place in the defense strategy of the Islamic Republic," adding, "Sanctions against Iran must be lifted and we will support any diplomatic plan that achieves this goal."

The Biden administration responded Aug. 5 by urging Iran to return to the talks on the Joint Comprehensive Plan of Action (JCPOA) that were suspended in June.

State Department spokesman Ned Price told reporters that the nuclear talks are an "urgent priority" and that "this process cannot go on indefinitely."

“If President Raisi is genuine in his determination to see the sanctions lifted, well, that is precisely what’s on the table in Vienna,” Price added.

As we have written here and here, there are four reasons why Raisi may consider closing on the nuclear deal negotiations: The Iranian economy needs relief from US oil and financial sanctions, especially because of the COVID-19 pandemic; the JCPOA was popular, and Raisi’s victory as president was marked by voter apathy and the lowest turnout ever for an Iranian presidential election; Raisi did not oppose the JCPOA during his presidential campaign; Iranian Foreign Minister Mohammad Javad Zarif, in his "final report" on the JCPOA, wrote that he leaves with a "framework for a possible deal" in place.

Closing the deal is not simply about showing up in Vienna for the seventh round of the talks. Differences remain, as we report here, over "Iran’s willingness to come back into compliance, the sanctions relief offered by the United States and the sequencing of a mutual return to the deal." And Iran has no interest in expanding the talks beyond the nuclear file to address regional issues and Iran’s missile programs, as the Biden administration has proposed.

Bennett: Israel knows "how to send a message to Iran in our own way"

In Israel, Prime Minister Naftali Bennett has put down his marker on Iran, after claiming that his predecessor, Benjamin Netanyahu, was more talk than action.

The United States, Israel and the EU have blamed Iran for a drone attack on an Israeli-linked tanker in the Gulf of Oman on July 29 that killed two — a Romanian and a British citizen. Iran denies the charge. The Pentagon has not ruled out a role in a “collective response” to the attack promised by the Biden administration, Jared Szuba reports.

Bennett, addressing the Cabinet on Aug. 1, said, "We expect the international community will make it clear to the Iranian regime that they have made a serious mistake."

"In any case," he added, "we know how to send a message to Iran in our own way."

"Expectations of an Israeli response are high," writes Mazal Mualem. "Bennett knows that the eyes of the world, especially regional leaders and the United States, are looking to him and his policy now. He understands that he faces a test not just before the Israeli public, but before Israel’s enemies, foremost among them Iran, Hamas and Hezbollah, who are now testing the limits of the new government he heads."

Bennett is also being tested on its northern border, where rockets fired into Israel from Lebanon in recent days has led to retaliatory airstrikes, as we report here.

Although some Israeli military and security sources blamed Palestinian groups for the attacks this week, Hezbollah took credit for the rockets launched into Israel on Aug. 6.

"Israel is trying to formulate a coherent policy on its complex northern front that addresses not only Hezbollah and other pro-Iran militias operating out of Syria, but also Iran’s nuclear weapons ambitions, Iran’s entrenchment in Syria and the Iran-sponsored project to upgrade Hezbollah’s rockets into a precision missile arsenal of hundreds of rockets. Such an arsenal would be a tie-breaker," writes Ben Caspit.

"Bennett is also hearing from voices calling for strikes against Hezbollah precision rockets, given the recent attacks," said Micky Aharonson, who served on Israel’s National Security Council and is now an international relations expert at the Jerusalem Institute for Strategy and Security.

"In doing so, Bennett will have to consider timing and proportionality," she added, as any military response would only be a temporary fix and not solve the problem of Hezbollah. Israel’s response, if not carefully considered, could also play to Iran’s public relations advantage, and the motivation would remain for further action.

"Israel is trying to have its cake and eat it, too — to retaliate aggressively without escalating things just weeks ahead of Bennett’s visit to Washington, before it has fully exploited the global diplomatic campaign it is waging against Iran, Hezbollah’s patron, funder and operator," writes Caspit.