The new head of state reiterated Iran's controversial regional policy, even as it has been at the very core of tensions between the Islamic Republic's hard-line establishment and the West. 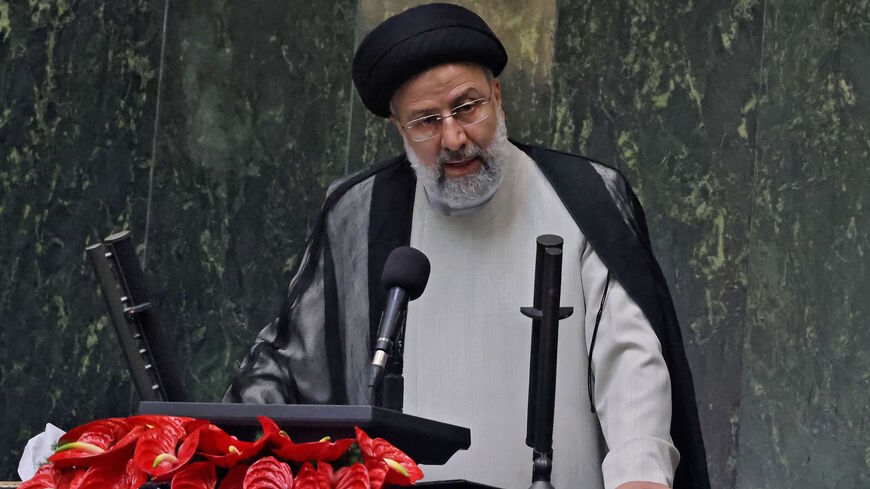 New Iranian President Ebrahim Raisi speaks during his swearing-in ceremony at the Iranian parliament in the capital, Tehran, on Aug. 5, 2021. - ATTA KENARE/AFP via Getty Images

Iran's new president, Ebrahim Raisi said the Islamic Republic's regional policy is "a source of security," in a message of defiance to the West, which has been worried about Iran's regional influence as a destabilizing factor.

Raisi made the comments during his inauguration ceremony in the Iranian parliament Aug. 5. According to Iranian media, the event was attended by representatives from over 70 countries, among them Afghan leader Ashraf Ghani and Iraqi President Barham Salih.

"We will stand by the oppressed, whether they are in Europe or the US, in Yemen, Syria or Palestine," Raisi said after taking his oath of office. Listening to those words were delegates from the Palestinian movements Hamas and the Islamic Jihad as well as Lebanon's Hezbollah, groups Iran backs and funds for what it calls legitimate causes. Much of the West, however, has branded those groups as terrorist entities.

While stressing the need for the removal of US sanctions, which have brought Iran's economy to its knees, Raisi did not present a clear road map on how his government will resume stalled talks with Washington over the revival of the Iran nuclear deal. Prospects of those talks have turned increasingly dim in recent weeks as negotiating team members who represented President Hassan Rouhani's moderate government are being replaced with less accommodating diplomats. Kayhan, the hard-line daily linked to the office of Iranian Supreme Leader Ayatollah Ali Khamenei, suggested in an editorial Aug. 5 that the Raisi administration will simply walk away from the nuclear deal if Washington refuses to give in to Iran's demands.

Despite the bleak prospects, the European Union, which has been pushing for the accord's reinstatement, sent its own representative, Enrique Mora, to the Raisi inauguration ceremony. The move invited sharp criticism from a plethora of rights groups, political dissidents and opposition leaders.

It was "almost like a slap in the face, to say the least," said Reza Pahlavi, the exiled son of Iran's last king, the Shah, who was overthrown in the 1979 revolution. In an interview with AFP, Pahlavi accused Western democracies of "stabbing" Iranians in the back by "legitimizing" Raisi.

Raisi is accused of involvement in the execution of thousands of Iranian political prisoners in 1988 when he was a deputy prosecutor and allegedly issued verdicts as a member of a notorious "death panel." Ever since his victory in the contentious, one-sided presidential election in June, international advocacy groups have been calling for Raisi to be held accountable for his rights record.

Before the inauguration ceremony, Iran's security officials said the airspace in the capital, Tehran, and in two adjacent provinces was closed off for three hours for security purposes. The order appeared to have opened up wounds and served as a tragic reminder to families of the passengers of a Ukrainian International Airlines flight who lost their lives when their plane was shot down by Iran's Islamic Revolutionary Guard Corps in January 2020. The families have accused Iranian officials of using that plane as a human shield of sorts by intentionally keeping the country's airspace open at a moment of anticipation of US retaliation following an Iranian attack on a US base in neighboring Iraq, which was in turn a measure of revenge for the US killing of top Iranian commander Qasem Soleimani.

"They close off the airspace on the day of appointing the dictator's apprentice [Raisi's inauguration] but not on the day of war, so that they could live long and safe enough to continue their plunder of the country," tweeted Hamed Esmaeilion, a dentist in Canada who lost his wife and daughter, who were passengers on the downed aircraft.