Apart from the controversy over an EU representative's presence at the event, the absence of once powerful politicians laid bare divisions in Iran's upper echelons. 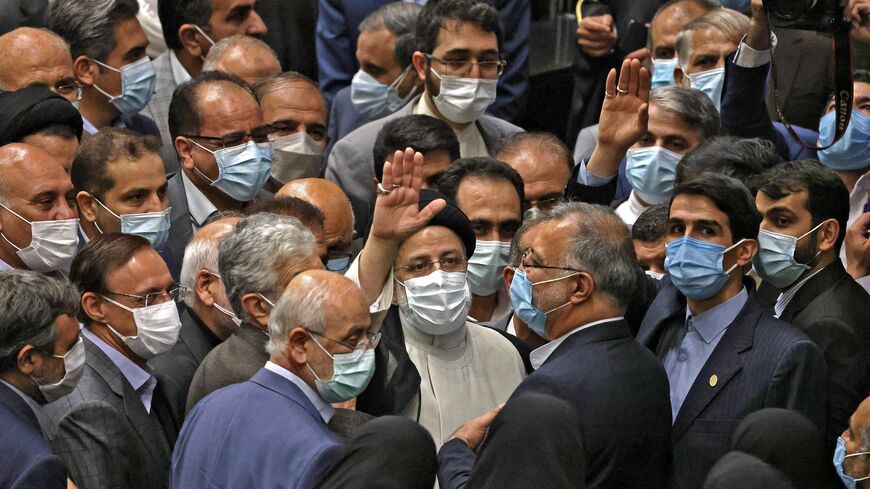 A week after Ebrahim Raisi's inauguration as Iran's new president, questions are lingering and speculation growing over the absence of certain figures from the ceremony. Were they not invited or did they decline to attend? Either way, the visible absences speak volumes about widening cracks in the corridors of power in Tehran.

Ahead of the Aug. 5 swearing-in ceremony, Iranian news outlets reported that invitees from 73 countries were to attend, including 10 heads of state. Of them, only the Iraqi and Afghan presidents made it. Next in seniority were the prime ministers of Syria and Armenia.

Notably, there was a marked presence of representatives of the regional militant groups Iran is funding to strengthen an anti-Israeli "axis of resistance" and advance its controversial regional influence. The state TV's live broadcast repeatedly panned the camera over those guests: leaders of the Palestinian movements Hamas and Islamic Jihad, the deputy chief of Lebanon's Hezbollah and the spokesperson for Yemen's Houthi rebels, all seated in the first row next to the Afghan and Iraqi presidents.

The day before the inauguration, the state broadcaster's website reported that a delegation from Iran's regional foe Saudi Arabia was set to join the event. There was later no explanation given for the group's absence.

The only senior Western official attending the ceremony was Enrique Mora, a top European Union diplomat who has also represented the bloc in the stalled talks between Tehran and major powers over the revival of the Iran nuclear deal. Unsurprisingly, Mora's presence invited widespread criticism before and after the ceremony rooted in accusations of human rights violations by Raisi.

Narges Mohammadi, an internationally renowned and outspoken lawyer who has been repeatedly jailed by Iranian authorities, reminded the European diplomat in a public letter of the Islamic Republic's "brutal and merciless crackdown against the defenseless people … whose blood reddened the streets." Mohammadi was referring to the nationwide protests in November 2019 sparked by fuel price hikes and the ensuing government response that left hundreds of Iranians dead. "My people and I will keep in our minds the day you attended" the inauguration, he warned.

Exiled Iranian rights activist Masih Alinejad also challenged Mora for endorsing "this mass murderer’s reign," asking the European diplomat if he was equally "ready to listen to the families" of the November 2019 victims.

Ironically, Raisi described himself during his swearing-in speech as a defender of human rights, saying his government will stand up for the oppressed, but did not address his alleged role in the execution of thousands of political prisoners in the 1980s.

Iran's hard-line ruling establishment has also declined to clarify ambiguities regarding the absence of several senior figures who would have traditionally been part of the ceremony. Former Presidents Mahmoud Ahmadinejad (2005-2013) and Mohammad Khatami (1997-2005) were nowhere to be found. Both have been gradually isolated over their open criticism of the government. And the once hard-line Ahmadinejad, who was the apple of Supreme Leader Ayatollah Ali Khamenei's eye, was barred from running for president in the past two elections.

The case of the Larijani brothers was even more shocking. As chairman of the Expediency Council and member of the Guardian Council, Sadeq Larijani's absence should have been out of the question. The same holds true for his brother, Ali Larijani, who is the longest-serving parliament speaker and a Khamenei adviser. Yet neither of the two were seen at the swearing-in ceremony.

A close associate of Ali Larijani told the Reformist outlet Etemad Online that the veteran nuclear negotiator might have been excluded only because of COVID-19 pandemic-related restriction and the limited space in the event. Still, amid no official explanation, it was not immediately clear if the Larijanis had shunned the event to send a message of discontent or it was the establishment that blocked them from it.

While they still hold important positions, it is an open secret that the once powerful brothers have fallen from grace, gradually and effectively being excluded from the inner workings of Iranian politics. For all his long service and loyalty, Ali Larijani, a centrist, was disqualified from the June presidential race. His brother, Sadeq, despite being an ultraconservative cleric, has on various occasions spoken out against the ruling elite and the powerful Islamic Revolutionary Guard Corps. Most notably, he revealed how the corps manipulated the vetting process at the Guardian Council — of which he is a member — the very council that voted to crush his brother's bid for presidency.

Under Iran's constitution, the presidency require approval by the Guardian Council members. In an extremely rare move, Sadeq Larijani did not show up at the council's signing session on Raisi's approval ahead of inauguration day.

Having won Iran's presidency in an election marred by the lowest turnout recorded in Iran's history, Raisi is by all accounts facing a crisis of legitimacy. Perhaps the ruling hard-liners went out of their way to make his inauguration a glorious event that would overshadow questions about his legitimacy, popularity and rights record.

With all the backlash, they appeared to have done the new president more harm than good. The ceremony also publicly unveiled new outcasts from the Islamic Republic's fast-shrinking inner circle.