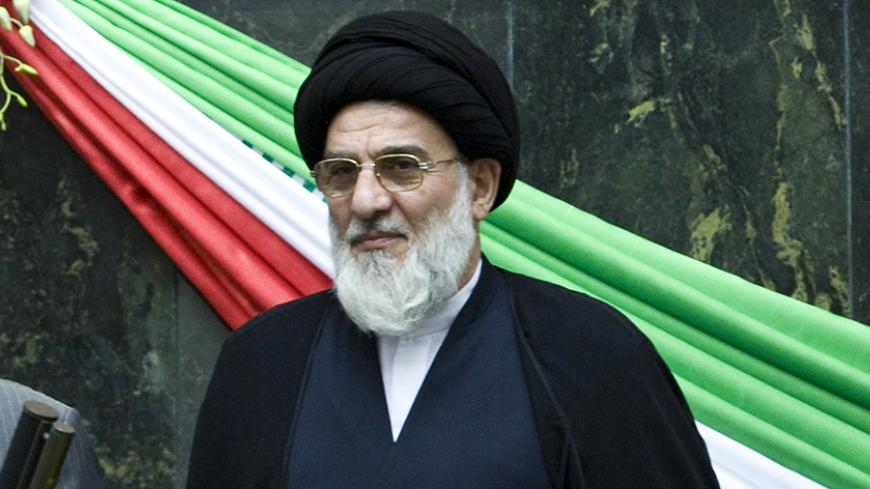 On Aug. 14, Iran’s supreme leader, Ayatollah Ali Khamenei, appointed Ayatollah Mahmoud Hashemi Shahroudi as the new chairman of the Expediency Council. Ayatollah Akbar Hashemi Rafsanjani had headed the council for decades, until his death in January.

The Expediency Council was established in 1988 to resolve differences or conflicts between the parliament and the Guardian Council, which is tasked with assessing and approving parliament bills based on their adherence to Islamic law.

Prior to Khamenei announcing the council's new leader, rumors had circulated about the possible appointment of conservative Ayatollah Mohammad Ali Movahedi Kermani, who temporarily chaired council sessions after Rafsanjani's death, of Ebrahim Raisi, the conservative cleric defeated in the May presidential elections by moderate incumbent Hassan Rouhani.

The eventual appointee, Hashemi Shahroudi, headed the judiciary from 2001 to 2009 and is a member of the Assembly of Experts, which chooses and supervises the supreme leader. In the Iranian political arena, Shahroudi is considered a moderate ayatollah and has views close to those of Rafsanjani, who also served as Iran's president for two terms (1989-1997) and led the moderate camp.

In remarks suggestive of the Reformists being content with Shahroudi’s appointment, Nemat Ahmadi, a Reformist analyst, told the daily Arman on Aug. 15, “Given the national position and moderate attitude of Ayatollah Shahroudi, there is hope that we will see the Expediency Council reaching the goals that have been set and see effective decisions taken like those [by] Ayatollah Rafsanjani.”

Meanwhile, former hard-line President Mahmoud Ahmadinejad, who was disqualified from running in the May elections, had his membership on the Expediency Council renewed. His reappointment surprised observers given that he had ignored Khamenei’s public advice to him that he not run for the presidency.

Faridoldin Haddad-Adel, an influential conservative figure and son of former parliament Speaker Gholam-Ali Haddad-Adel, tweeted Aug. 14, “Appointing Mr. Ahmadinejad [to] the Expediency Council is his last chance in his political life.” He added that Ahmadinejad’s reinstatement doesn’t mean that his “irreparable mistake” of bucking the supreme leader would be ignored.

The other new members on the Expediency Council are Mohammad-Bagher Ghalibaf, the conservative presidential candidate who withdrew in favor of Raisi in the last election; Raisi, custodian of the holy shrine of the eighth imam of Shiites in Mashhad; Ahmad Tavakoli, a former conservative parliamentarian; Seyyed Mohammad Sadr, a former Reformist diplomat; Ayatollah Mohsen Mojtahed Shabestari, former prayer leader of Tabriz; and Seyyed Mohammad Mir-Mohammadi, the chief of staff for Ayatollah Khamenei during his presidency between 1981 and 1989.

According to the Aug. 15 edition of the Reformist daily Shargh, Rouhani and parliament Speaker Ali Larijani, previously members of the Expediency Council, have not been reappointed and will only attend the sessions in their roles as president and speaker.

Based on an Aug. 15 report by the Reformist Etemaad, the supreme leader has asked the new chairman and members of the Expediency Council to better organize the council to improve its effectiveness.