The appointment of Sadegh Amoli Larijani as chairman of Iran’s Expediency Council has fueled speculation that conservative former presidential candidate Ebrahim Raisi is poised to succeed him as judiciary chief. 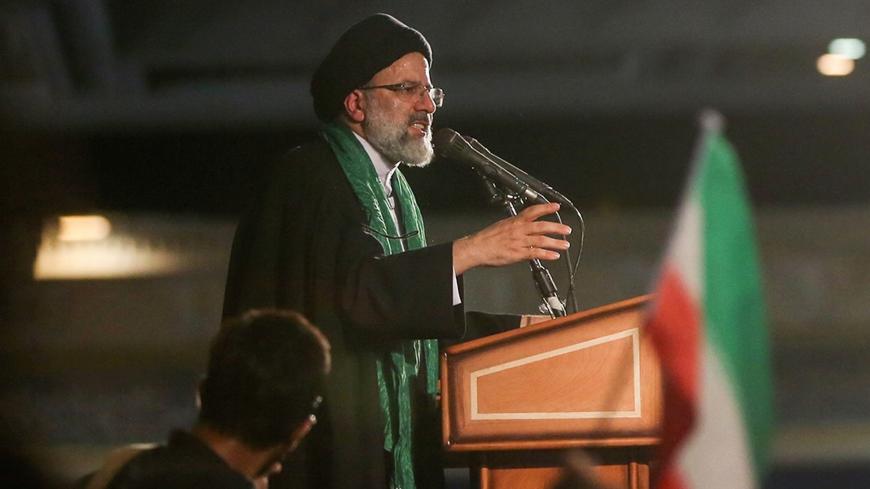 Iranian presidential candidate Ebrahim Raisi speaks during a campaign rally at the Mosalla Mosque in Tehran, Iran, May 16, 2017. - TIMA via REUTERS

Iran's Supreme Leader Ayatollah Ali Khamenei has appointed Ayatollah Sadegh Amoli Larijani as chairman of the influential Expediency Council amid heavy speculation about who will succeed Larijani as head of the powerful judiciary. One top name circulated for the post is Ebrahim Raisi, the conservative who lost the 2017 presidential election.

The conservative Larijani was named to head the Expediency Council on Dec. 30 after its chairman, Ayatollah Mahmoud Hashemi Shahroudi, died Dec. 24. Shahroudi had rarely attended council meetings since his appointment in 2017 as he was dealing with intestinal cancer. The Expediency Council has the final say when a disagreement erupts between the Guardian Council and parliament over a bill. The Guardian Council is tasked with studying bills to see if they are in accordance with Islamic law and the Iranian Constitution.

Before Shahroudi, moderate Ayatollah Akbar Hashemi Rafsanjani had chaired the council for 22 years. The announcement of his successor took more than seven months. In contrast, Amoli Larijani was chosen to succeed Shahroudi less than a week after his demise.

The behind-the-curtain importance of this urgent appointment may be rooted in recent tensions between the parliament and the Expediency Council over several bills aimed at bringing Iran in line with the standards set out by the Financial Action Task Force.

The FATF is an international, intergovernmental organization created in 1989 to combat money laundering and terrorism financing. Iran's presence on the FATF blacklist was suspended in 2016 with the implementation of the Joint Comprehensive Plan of Action. At its latest meeting in October, FATF gave Iran until February to undertake reforms that will bring it in line with global banking norms.

To meet the requests of the FATF, Iran's government submitted four motions to the parliament that were passed by lawmakers but rejected by the Guardian Council. Simultaneously, in an unusual development, the Expediency Council's new monitoring group — tasked with assessing whether the bills are in line with the macro policies of the establishment — entered the field and rejected the bills. The reaction of the monitoring group triggered irritation among lawmakers, leading parliament Speaker Ali Larijani, who indirectly said he doesn’t recognize the Expediency Council subcommittee’s objections.

He is the younger brother of Amoli Larijani.

Against this backdrop, the appointment of Amoli Larijani as Expediency Council chairman may be good news for the administration of President Hassan Rouhani as he is rumored to be likely to take the side of the government and members of parliament on the FATF-related bills. In this vein, it ought to be noted that on Oct. 19, First Vice President Eshaq Jahangiri said the judiciary chief, parliament speaker and president have agreed that passage of the four FATF-related bills is a necessity for the country.

It should be noted that Ali Larijani is considered a moderate figure who has maintained friendly ties with Rouhani.

Meanwhile, speculation has reached a peak about who will replace Amoli Larijani in the judiciary, as his second five-year term will end in August.

Reports have emerged about Raisi taking over the judicial branch of power. Raisi, the conservative candidate in the 2017 presidential elections that landed Rouhani a second term, has spent most of his career within the judiciary. While his appointment as judiciary chief might at first glance appear unlikely as it was just two years ago that Khamenei named Raisi to be custodian of the holy shrine of Imam Reza, various reports indicate he is very close to being selected. Of further note, Raisi has been also described by some observers as a candidate to become Iran’s next supreme leader.

It should be noted that Raisi has not denied the many rumors about his next potential career move. On Jan. 1, responding to a question about his possible appointment as judiciary chief, Raisi didn’t didn't reject it and merely said, “Go ask those who published these reports.”

Mohammad Jafar Montazeri, the prosecutor general, recently reacted to reports that Raisi might be appointed to head the judiciary by saying, “It is still [circulated] in cyberspace, [but] it will take a while to be turned into reality.”

According to a text published on Khamenei's website, the supreme leader has apparently asked Amoli Larijani to settle the remaining issues in the judiciary and to start focusing fully on his new positions in the Expediency Council and the Guardian Council. This could mean that that the appointment of Amoli Larijani's successor may occur sooner than expected.

Other candidates to succeed Amoli Larijani include Montazeri and judiciary spokesman Gholamhossein Mohseni Ejei. Over the past year, Montazeri has intensified his outreach activities, including engagement with the media. For instance, he recently went to the Tehran Grand Bazaar to "listen to complaints" among traders while also showing up at Islamic Azad University’s main Tehran campus to talk to students who had staged a protest over a deadly bus crash.

It should be noted that it has become an unwritten tradition for the head of the judiciary to have been a member of the Guardian Council, as was the case with Ayatollah Mohammad Yazdi (1989-1999), Shahroudi (1999-2009) and Amoli Larijani (2009-to date).

Whatever happens in the coming months, Amoli Larijani's farewell to the judiciary could also be good news for the media in Iran. During his time in office, outlets have been under pressure from the judiciary, leading to self-censorship among newspapers and news sites.