How Iran’s institutional politics is about to become more complex

A relatively unknown subdivision of Iran’s Expediency Council is causing a stir in national politics as it appears to be girding to directly enter the legislative process. 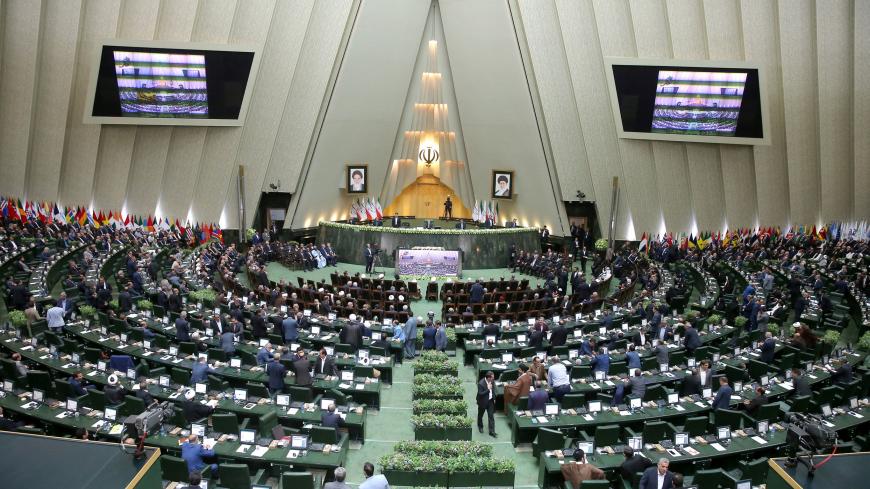 Iranian conservatives appear to be planning to undermine the national parliament's power as an institution, which would thereby undermine the elected body’s position within the country’s political system.

The Expediency Council has a subordinate division named the Supreme Group of Supervision, which came into existence in 2013 by the order of Supreme Leader Ayatollah Ali Khamenei. In fact, Khamenei delegated his own duties under the constitution to the group to monitor whether bills are moving in accordance with the "macro policies of the establishment."

The final decision to form this group was made in 2013 when late moderate Ayatollah Akbar Hashemi Rafsanjani was chairman of the Expediency Council. However, the 15-member group, whose members were appointed under the current chairman of the council, has lately started to directly declare its views on parliament's bills. Of note, conservative Ayatollah Mahmoud Hashemi Shahroudi was appointed as chairman of the council in 2017 and has been mostly absent in the council's meetings because he has cancer. Two hard-line 2017 presidential candidates Ebrahim Raisi and Mostafa Mirsalim, as well as conservative Mohammad-Reza Bahonar and Ahmad Tavakoli, are among the members of the group.

The spotlight on the Expediency Council was turned on last month when the Guardian Council's spokesperson, Abbas-Ali Kadkhodaei, tweeted that the Guardian Council's issues with two of the four bills related to Iran’s action plan to permanently exit the Financial Action Task Force (FATF) have been resolved. However, it added that the bills would nonetheless be sent back to parliament because of issues the Expediency Council had found in the bills. The FATF is an intergovernmental organization created in 1989 to combat money laundering and terrorism financing. Iran's presence on the FATF blacklist was suspended in 2016 with the implementation of the nuclear deal with six world powers. At its latest meeting in October, FATF gave Iran until February to undertake reforms that will bring it in line with global banking norms.

In reaction to Kadkhodaei’s statement, a number of parliament and government members raised their voices against this new "negative change."

Hesamoddin Ashna, the president's cultural adviser, tweeted on Oct. 19, "Apparently, in the absence of its chairman, some have the tendency to put the Expediency Council in the position of the Senate." By "some," he was referring to Mohsen Rezaie, a rival of Rouhani in the 2013 presidential elections who has long served as secretary of the council.

Ashna then sarcastically added, "Don’t make haste; put these initiatives away until the amending of the constitution." It should be noted that Iran had a senate prior to the 1979 Islamic Revolution, but that it was abolished under the Islamic Republic. Under the current situation, the Guardian Council effectively acts as a constitutional court as well as a second chamber of parliament.

He then noted that the new group in the Expediency Council is acting like a second Guardian Council, which is in "clear and explicit violation of the constitution." Pointing the finger at Rezaei, Motahari further remarked, "We shouldn’t ignore the role of the dear secretary of the Expediency Council in this [negative] change. He is … increasing the authority of the council and entering the legislative area, and he also has taken advantage of the absence of Ayatollah Akbar Hashemi Rafsanjani."

Meanwhile, the parliament speaker seems unwilling to acknowledge the role assumed by the Supreme Supervision Group. For instance, without paying any attention to the "errors" the monitoring group had found in the FATF-related bills, Speaker Ali Larijani recently sent them to the Expediency Council to decide about their fate since both parliament and the Guardian Council insist upon their viewpoints. However, a group of hard-line parliament members then wrote an open letter to Larijani on Oct. 26, criticizing his actions and defending the role of the Supreme Supervision Group.

Moreover, Heshmatollah Falahatpishe, chairman of parliament's foreign policy and national security commission, stated Nov. 11, "The Expediency Council is basically in no position to find an error in the parliament's bills."

However, hard-line members of the Expediency Council have fiercely defended the role of the Supreme Supervision Group, while the few moderates of the council have signaled their opposition.

Nonetheless, the Expediency Council's recent policies may be stemming from both the plans of Ayatollah Shahroudi's — who has shown his interest in empowering the institution he is chairing — and the hard-liners, who would like to see parliament's power diminish.

In 2017, Shahroudi stated that the Expediency Council acts like a senate in Iran's political structure. He said he believes that after the 1979 Islamic Revolution, founder of the Islamic Republic Ayatollah Ruhollah Khomeini had assigned some of the key duties of the old senate to the Expediency Council so that, if need be, the council could participate in the legislative process, and that thus there is no need for a senate.

This line of thinking has not gone unchallenged. Parliament member Motahari, who has come out to defend parliament's powers, believes that the Iranian Constitution allows the Expediency Council to monitor the "enforcement" of the macro policies of the establishment and doesn't state that it ought to participate in the legislative process. Speaking of the Supreme Supervision Group’s duties, Motahari has said, "The existing laws should be assessed, and those which are in violation of the macro policies [of the establishment], should be [noted] to the government, parliament and the judiciary — so in case of a need for a new law, a new bill should be presented."